Partenope is attracted to Arsace, without knowing that he has
previously abandoned Rosmira, who now — disguised as a chieftain under
the fictional name of Eurimene from Armenia — arrives in Naples with
the aim of winning him back. A third prince, Emilio from the nearby reign of
Cumae (tenor), declares war on Partenope, offering marriage for peace. His
attack, however, is easily rebuked by the joint forces of the queen and her
lovers, so Emilio is detained at Partenope’s court as in a chivalrous
prison camp of sorts. Rosmira/Eurimene secretly confronts Arsace demanding
that he keep her true identity covered, then provokes him publicly in every
possible manner. In the end, she challenges him to a duel in a court of
honor, but must withdraw as he puts the condition that they fight stripped to
the waist. Partenope decides to marry Armindo, orders that repentant Arsace
be reunited to Rosmira and sends back Emilio to Cumae on friendly terms.

A bit too madcap by the average standard of early opera seria,
Silvio Stampiglia’s libretto was written for Naples in 1699 and
subsequently set by several composers. Rather than in outstanding literary or
dramatic merit, the secret of its popularity may lie in the variety of
situations and the panoply of stock affetti associated to them. One would
like to call Partenope a Baroque sitcom, now and then on the verge
of vaudeville. A radical admirer, none less than Edward J. Dent,
affected to find in it something of a Shakespearean atmosphere, apparently
referring to the bittersweet climate of The Twelfth Night rather
than to the Bard’s tragedies or history plays. As recently argued by
the British Handel scholar David Vickers: ‘The plot offers ample scope
for emotional intensity, insightful characterization, wit, sexual innuendo,
and profound despair’. This is probably what most appealed to Handel,
who, after an abortive attempt in 1726, succeeded to present his own setting
of Partenope to the London public in 1730. After two
not-too-successful runs in that year at the King’s Theatre, and a
nearly disastrous revival in 1737 at the Covent Garden, Partenope
disappeared for two centuries. Modern revivals in German and English
translations started at the Gˆttingen Handel Festival in 1935 and went forth,
if very sparsely, until 1998, when the original Italian libretto resurfaced
in Cooperstown, NY, and in New York City. The present staging at Ferrara
— scheduled to circulate later in Modena, Naples and Montpellier,
France — was, believe it or not, the opera’s Italian premiere
ever.

To devout Handelians like myself (as opposed to sane folk who would object
to sitting at the opera for three-and-a-half hours), the experience of
hearing live an almost uncut score of the Harmonious Blacksmith is
increasingly rare and a potential source of delight. It did not happen this
time. In addition to its unusually high number of arias, Partenope
has a remarkably prominent number of ensembles (eight, including two
choruses), two accompanied recitatives and some flamboyant instrumental music
of a warlike character. Ottavio Dantone’s performing version,
essentially based on Handel’s first version of three, pruned 8 out of
48 set pieces: four arias for Arsace, as many for Partenope, and one for
Armindo — which seems a generous appeasement with modern listening
habits. 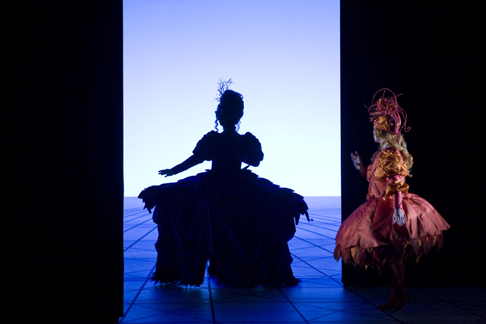 Nevertheless, there was still much left to cherish. First of all, a classy
ensemble of voices, all well versed in period performing practice. A trio of
ladies shared the best applause: as the de-facto protagonist Arsace,
Marina De Liso sketched an enigmatic and irresolute anti-hero; nonetheless,
her cleanly secure intonation, refined uttering and elegant coloratura were
glorious throughout. As Rosmira/Eurimene, Sonia Prina towered as the
relentless powerhouse she usually is onstage, sparking a regular ovation in
her defiant aria ‘Io seguo sol fiero’ with obbligato horns and
oboes. Valentina Varriale, as the moonstruck Armindo who finally gets the
girl, impressed for the sheer beauty of her color, dark and fully
fleshed-out. The quiet lilt of her heart-rending andante ‘Non chiedo, o
luci vaghe’ conveyed all the elegy of selfless love, quite
Arcadian-style. 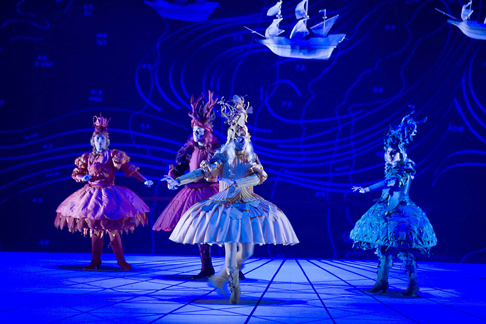 In the title role, Elena Monti embodied the seductive, authoritative and
slightly vindictive nature of her character almost to perfection. Depriving
her of her signature aria ‘Qual farfalletta’, towards the end of
Act II, was indeed insensitive. Both Emilio and Partenope’s chamberlain
Ormonte (bass) are deadpan roles, yet their respective performers Cyril
Auvity and Gianpiero Ruggeri came out egregiously for their assured
technique, also showing a firm grip of style requirements. In the remote
confrontation with the role-creator Annibale Fabri (a virtuoso from Bologna
who managed to become a lone tenor star in the age of castrati), Auvity had
to struggle hard with a terrific range and treacherous coloratura. He emerged
unscathed, albeit switching to a peculiar mixed utterance at the upper and
lower ends of his tessitura. Who knows whether Fabri, described by a
contemporary British observer as ‘a very good master of musick’
did the same? 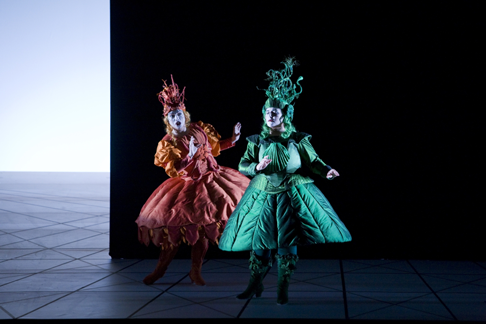 Giuseppe Frigeni’s integrated light-set-direction design and Regina
Martino’s costumes provided a lesson of how to approach early opera
without either irreverent gimmicks or cheap archaeological historicism. Their
easily recognizable color codes, applied to studies in abstract perspective
resembling chessboards, their luxuriant headpieces and peacock-shaped gowns
for everybody (whether males, females or cross-dressers), conveyed a
quintessential Spirit of Baroque — somewhat near to the Beijing Opera,
where a single flag stands for ten thousand warriors or a model ship for
whole fleets. Body language and perusal of stage space did fit admirably into
the frame.

Antonio Florio and his (Naples-based) Piet‡ dei Turchini were slated to
steer this important production. In the end, they declined because of budget
disagreements, so the baton passed onto Dantone, whose period band Accademia
Bizantina can stand on equal footing with any such ensemble in Italy. Indeed,
they brought the wondrous machine to triumph and were awarded full honors;
only a few skipped notes in the natural brasses gave evidence of limited
rehearsing time, but this may improve later in the tour.

All photos by Marco Caselli Nirmal