And that seems to be what Cologne Opera has facilitated at its latest premiere. For it has taken Albert Lortzing’s comic opera *Der Wildsch¸tz oder Die Stimme der Natur* (The Poacher, or The Voice of Nature) and allowed the creative team to appropriate it as the basis for some wildly divergent production choices (this interpretation is shared with Stuttgart Opera).
*Der Wildsch¸tz* is seldom performed outside of Germany, which is a pity since the score has some wonderful set pieces and arias, some of which turn up now and again on student recitals, gleaned from operatic aria anthologies. (I myself sang “at” a couple of them in college.) The plot is convoluted to be sure, even by normal mistaken-identity-royalty-in-disguise standards. But given the right production and good musical standards, it is capable of giving much pleasure.
Happily, “good musical standards” Cologne had in ample supply, most especially with its roster of soloists. Miljenko Turk is a house treasure, possessed of a buzzy, focused, well-schooled baritone; an authoritative, virile stage presence; and an innate musicality. Having already enjoyed him immensely in *Billy Budd* and *Der Freisch¸tz*, I was just as taken with his secure vocal assumption of Count von Eberbach. Would that he had not been got up as a faux storm trooper for the first scene.
The engaging Hauke Mˆller always put his pleasing lyric tenor in good service to a physically wiry and agile performance as Baron Kronthal. Although boyishly handsome (at times a ringer for Sean Penn in “Milk”), this ectomorph was not flattered by putting him in knee-length britches and an apron that unfairly highlighted a good-looking guy’s skinny calves and knobby knees. He’s the romantic lead, people! Okay, okay, he did make his first appearance as a swaggering, helmeted, sunglasses-wearing NASCAR driver, someone’s idea of a vision in yellow. (David Kˆnig is that “someone,” on the blame line for the evening’s variable costumes.)
In the title role of the “poacher” Wilfried Staber’s Baculus sang particularly well, his sizable, clearly pointed bass and animated presence welcome in his every appearance (even as he looked duff in his too-formal suit, red bow tie and horn-rimmed glasses). Tall (no, really tall), lanky, orotund bass Jochen Langner was the eccentric Pankratius, here demoted for some reason from major-domo to a hunchbacked chef. I kept waiting in vain for the “Young Frankenstein” joke (“What hump?”).
On the distaff side, Claudia Rohrbach’s pristine soubrette made her every phrase a delight and she scored big (with Mr. Staber) in the delightful *A-B-C-D* duet. I was (only) slightly less taken with the Countess von Eberbach, Viola Zimmermann, who arguably has the least developed female principal role. Her meaty mezzo occasionally seemed a little slow to respond in a few of the sprightlier passages, although she contributed well to the ensembles and is a poised actress. In the tiny role of Nannette, Opera Studio member Hanna Larissa Naujoks made her brief appearance entertaining. 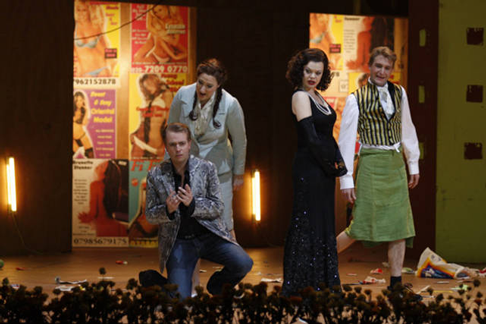 Miljenko Turk (Graf von Eberbach), Katharina Leyhe (Baronin Freimann), Viola Zimmermann (Gr‰fin), Hauke Mˆller (Baron Kronthal)
While I have admired Katharina Leyhe at past Cologne outings, her entrance aria as Baroness von Freimann (disguised flatteringly as a male student in one of the evening’s better costumes) was a bit fluttery. She seemed nervous, the low range a mite unsteady, the passage work squishy. She even fumbled and dropped her prop sword as she exited. Once past this, however, her rather light lyric soprano settled into a limpid and often affecting rendition of the part. Still, the role really requires a true diva temperament that seemed just beyond the ken of this gentle performer’s sensibilities.
Other questionable staging decisions aside (and I will chronicle a few), director Nigel Lowery made a fatal core mistake in his treatment of the dialogue. For he chose to present most of it in playback, first in the form of a scratchy “old” black and white film projected on an overhead screen, later as a filtered audio voice-over. All the while, the live actors were stuck on stage, dimly (and dumbly) down lit as they moved around in a Purgatory Pantomime, upstaged by the indifferent media display. This not only consistently frustrated any audience relationship that we tried to develop with the performers, rendering it to fits and starts; but, in a piece that relies heavily on its ability to charm, it rendered “Wildsch¸tz” quite utterly charmless. Maybe I was just tired from the train trip, but after tedious dialogue film number three sputtered to ill-paced life, its way-too-earnest Teutonic close-ups reduced me to uncontrollable giggles at how colossally un-funny it was.) By the time the show reverted momentarily to live recitations in the play-acting scene of ancient tragedies, no amount of melodramatic posing could reclaim it. 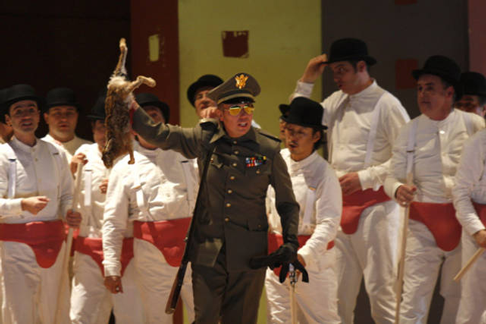 All photos by Klaus Lefebvre