Headed by the Melba protÈgÈe soprano Gertrude Johnson the company
grew in stature and by the 1950s featured expatriate singers such as Marjorie
Lawrence (whose centenary passed on 17 February this year) as Amneris in
Aida and another Melba protÈgÈe John Brownlee as Don Giovanni. The
company gave joint seasons in Sydney with the National Opera of New South
Wales. The Sydney company recruited many of the singers from Johnson’s
company and, in 1956 as part of the larger Australian Elizabethan Theatre
Trust founded what is now Opera Australia. As a national company a
requirement of Opera Australia’s funding is that it tour but performances
outside of Sydney are almost exclusively to Melbourne for seasons between
April and June and November and December each year.

Meanwhile companies established in other sates during the 1960s and in
1976 the Victoria State Opera formed and seasons by both companies continued
until 1996 when financial difficulties caused the Victorian company to be
absorbed by the national company and cease to exist. A decade later Victorian
Opera was founded under the artistic direction of former Opera Australia
staff conductor Richard Gill. Productions are modest to look at and use
emerging singers but the musical preparation is scrupulous and the singers
perform the roles rather than learn them as rarely-performing covers as
trainees in a larger company would do.

French director Jean Pierre Mignon has long been resident in Australia
where he established a theatre company that produced, among other things,
MoliËre’s version of the Don Juan legend. Mignon’s production of the
opera is reminiscent of MoliËre’s farce and the intimacy of the production
allows for subtle comedy more than usual in the opera. The Don himself
(Samuel Dundas), dressed in a gleaming white costume, the reverse of his true
colours, is an arrogant and conceited young pup (that so young-looking a Don
has notched up so many conquests beggars’ belief). Although his voice is
still young and light toned, he uses it with great skill, projecting the text
in very good Italian and giving it shape and nuance. He has a good grasp of
the Don’s mercurial character too, physically handsome he also conveys the
swaggering, aristocratic arrogance and, above all, the snake-eyed charm. With
only two modest arias Don Giovanni’s persona lives through music involving
other characters. Dundas savors these moments and is even more impressive in
the recititative passages, making them carry the bulk of his
characterization. An example is the brief scene with Zerlina (Michelle
Buscemi) before their duet “La ci darem la mano” where he seems to taste
the honey of his own words. Only the softest parts of the music, the opening
phrase of “La ci darem” and the mandolin serenade need the elusive
legato. 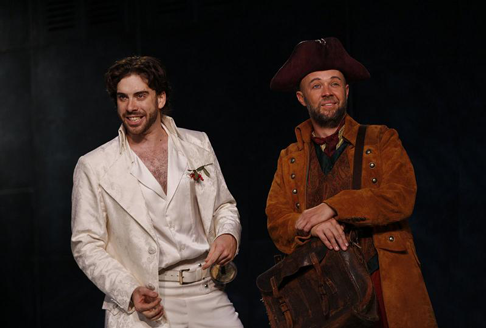 Zerlina’s music suits Buscemi’s silvery voice and she conveys
Zerlina’s gentle eroticism, ecstatically sighing the words “toccami qua”
in ‘Vedrai, carino’ with same understanding as Dundas conveying
Giovanni’s lust. Tiffany Speight sings regularly with Opera Australia and
has established herself in the lighter Mozart roles. A splendid Zerlina she
steps up to the dominant female character Donna Elvira. Speights’s radiant
soprano easily encompassed the music including the often-difficult lower
passages in the epilogue and elsewhere. She is a very subtle comedienne too,
doomed by her unshakable obsession with the faithless Don her Elvira flusters
like a frustrated schoolmistress. The Prague version of the opera was
performed (eliminating Don Ottavio’s “Dalla sua pace” and Elvira’s
“Mi tradi”) which is a pity as Speight would have crowned a spectacular
performance had she been allowed “Mi Tradi”. As Don Giovanni’s sidekick
Andrew Collis is another more experienced singer who creates an oily
Leporello, the director relating him back to the character, Sganarelle, in
MoliËre’s play. His ‘catalogue’ aria bubbles with vulgarity and just a
hint of admiration for his master’s virility. With no sign of stage nerves,
Dundas is a natural clown too and with Speight and Collis made the serenading
scene in act two hilarious without undermining the beauty of the music.

Donna Anna’s music presented a challenge to Caroline Wenborne but she
managed the difficult fioritura without any compromises. The fearful drama in
“Or sai chi l’onore” was less evident but again her performance was musically
intelligent. James Egglestone was equally adept at Don Ottavio’s ‘Il mio
tesoro’. Pity his “Dalla su pace” was omitted as it would have suited his
well supported and focused tenor voice. The vocal preparation of all of the
soloists was obviously thorough and the intimate scale allowed for some
dramatic details that would never work in a larger theatre. The Don, for
example, gives Zerlina a flower which drops suggestively from her hand at the
end of “La ci darem la mano” and is retrieved and re-used, like the Don’s
come-on lines, until it ends up planted in Elvira’s hopeful cleavage.

Richard Roberts’s set is a marvel of economy, transforming from back
streets to a Moorish palace and sinister tomb. Steeply raked and angled it
suggested the endless corners Don Giovanni backs into and escapes from.
Performed in the old National Theatre (named after Johnson’s enterprise and
where a portrait of her, knife raised, as the Queen of the Night fearlessly
protects what remains of her legacy) which seats 500 has the intimacy to put
Mozart’s masterpiece under a microscope. With a small chorus it was played
and sung without perhaps the greatest refinement but with undoubted
professionalism and a constant feeling for the excitement of the story and
the music.