But then, La Fenice’s extraordinary *Die Tote Stadt* was helmed on all three counts by the venerable triple threat Pier Luigi Pizzi in another of his masterful displays of how to perfectly showcase and (*gasp*) serve the work at hand. At this point in his long and illustrious career, Signor Pizzi is deservedly a veritable national treasure.
His atmospheric setting consisted largely of two angled black platforms mid-stage, headed by a door on each side, dipping from the wings, and coming to rest one on top of the other center stage, serving as the wherewithal for the entrances and exits in the “realistic” scenes.
This rather shallow space was dressed with two black-draped tables, sporting vases stuffed profusions of white flowers. Stacks of plump, over-sized black pillows were strewn on the floor, perfect for lounging. The stage right table also bore the all-important silver box-cum-reliquary containing the dead wife’s braid of hair. A full-length black and white oil painting of the deceased Marie was propped on the stage right wall, flanked by large candlesticks, and complemented with a corresponding full length mirror stage left.
This whole elegant “prison” of Paul’s own creation, is framed by a mirrored proscenium, and backed by black drapes, but no ordinary backdrop was this. For the cloth was able to trim into fourths (making three vertical openings) and/or fly into the loft, revealing all or part of a fantasy land of water and set pieces that were perfectly calculated to suggest the various locales in our hero’s troubled mind.
This upstage nether world was slightly skewed by a giant tilted overhead mirror which reflected the pool of water and all that was in it from a disorienting perspective. The tourist postcard town of Bruges never looked like this! After Marietta’s first appearance in which she teased and left, the drapes then revealed her upstage as the dead Marie, clad in white, and subsequently outlined by a spectral white frame that tilted up at us out of the water, creating a living double for the oil painting. Chilling.
After Marie glided off, she soon came back in a taunting mood, clad in a devastatingly dazzling red gown, replete with long train and diaphanous capes that she trailed in the water as she twirled and flung red roses willy nilly, roses from an identical bouquet that had figured so prominently in Marietta’s first scene. 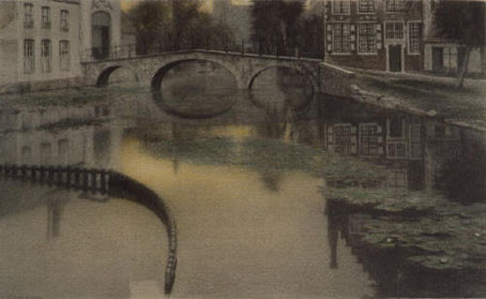 L’entrÈe du BÈguinage by Fernand Khnopff (1904).
Act Two’s carnival featured a canal boat, a silvery denuded cypress tree, two rotating buildings, Bruges’ bell tower, and, well. . .truly gorgeous designer costumes, another of Pizzi’s masterful accomplishments. To name one, there was a knockout nudie black lace number that evoked the same peak-a-boo naughtiness that adorned Anita Morris in *Nine.* Marietta was resplendent in yet another star-worthy, drop dead sequined red dress.
The most creative costume design effect was arguably the white clad funeral procession, which began respectfully enough slogging through the water, and ended with a profane parody of a religious ceremony, with the celebrants revealed to be naked under their chasubles. Their frenzied religious-sexual fervor as they kicked and hurled water about, costumes akimbo, in a demented tarantella was powerful imagery indeed. (Vincenzo Raponi contributed the excellent lighting design, and Marco Berriel the free-wheeling choreography.)
Nor did Pizzi falter in his directorial accomplishment with a gifted cast of singers pulled from the front ranks of the world’s roster. Stefan Vinke, in the punishing role of Paul, experienced a bit of spreading at times, but he is also in command of stentorian high notes that are as thrilling as you are likely to hear today. Man, he slams them home!
True, he sometimes did not recover quickly from the effort, the voice getting brittle in mezzo forte mid-range passages, and there were a few rough releases. However, he gets all the notes and more in this killer part, and even manages some wonderful messa di voce effects. I do worry that he muscled up for the big outpourings — I have never seen anyone open his mouth that wide — no, never — provoking concern for just how relaxed his jaw might be. But Herr Vinke delivered the musical goods, and he is also a committed actor with an appealing “bear” look. He is singing Siegfried later in the season here, and it should hold no terrors for him.
Solveig Kringleborn as Marie/Marietta confirmed my wonderful previous impressions of her artistry with an assured impersonation that was beautiful, blond, sexy, fearless, and vibrantly sung. *Mariettas Lied*, the opera’s best known tune, was voiced with silvery tone and lovely limpid phrasing. Her full-throated, arching phrases also gave much pleasure and if her vibrato got a bit (but just a bit) generous in pressed lower passages, it was more womanly than off-putting.
The roles of Frank-Fritz were well-served by the very musical baritone Stephan Genz, even though the voice occasionally got a little croony and hooty as is the wont of some German baritones. It must be said his *Pierrot’s Song* (the other famous melody) was pleasantly taken. All of the featured ensemble solos were uniformly secure. Special mention must go to mezzo Christa Mayer, whose Brigitta was a piece of luxury casting that showcased a rich, full-bodied instrument that would be a pleasure to encounter as, say, the Nurse in “Die Frau Ohne Schatten.”
The orchestra regaled us with professional playing of the highest order, easily the best effort from the pit I have yet experienced at La Fenice. Under Maestro Eliahu Inbal, they embraced every demand of Korngold’s sprawling score, capable at will of being tender, passionate, delicate, agitated, percussive, melodic, and most important, sensitively supportive of the singers.
Still, for all the radiant musical accomplishments, it was Pier Luigi’s day. His sure hand was evident in so many ways: beautiful use of the levels to define character relationships, excellent variety of blocking using the entire space in a psychologically meaningful way, and the ability and willingness to simply serve the creators’ intentions. When Marietta taunted Paul with Marie’s braid and he strangled her with it, it was not only highly effective drama, it was also just as called for in the script.
The final image found Paul walking slowly out of his “prison” and into the fantasy world upstage, literally walking into a sea of possibilities. He had shed his demons at last.
This was stunning lyric theatre. Mr. Pizzi, we should be cheering you still.
James Sohre