Had Burney visited Venice and the Incurabili short earlier, on May 24, he
might have attended the premiere of Jahel, a Galuppi oratorio recently
unearthed at the Zurich Central Library in Switzerland — probably a
remake of the score already performed at the Ospedale dei Mendicanti in 1747
and 1748. By 18th-century standards, 23 years was quite a long time-span in the
change of musical taste. Perhaps that’s why in 1772 Galuppi reverted to
the same subject on a different libretto and with a larger cast of characters
under the title Debbora prophetissa, but the core story remained the
same, based on chapters 4-5 of Judges in the version provided by the
Latin Vulgate Bible.

Actually, despite the triumphs gathered by his operas in London, Saint
Petersburg and Vienna, nowhere did Galuppi enjoy more popular acclaim than as a
composer of Latin oratorios on Bible subjects for the Ospedali of his
native Venice. It is reported that his Tres pueri hebraei in captivitate
Babylonis — premiered in 1744 at the Mendicanti — scored some
hundred (paying) performances, a feat comparable to those of modern musical
theater. Unfortunately, the 1770 version of Jahel is all we are left
with in this genre, since two more oratorios surviving in musical sources
(Adamo caduto of 1747) and Il sacrificio di Jephtha of 1749)
are in Italian.

At the outset of the eighteenth century, the language of oratorios at the
Incurabili became exclusively Latin, to remain so under the musical
directorship of Porpora, Jommelli, Cocchi, Ciampi, and Baldassare Galuppi. A
similar trend affected more or less the remaining three Ospedali.
Although the librettists’ choice was for a simplified variety of Latin,
aping at the stock imagery from contemporary cantata and opera seria
texts, one wonders whether the traditional status of Venice as a target for
multinational operagoers could account for such an unexpected association
between Latin and bel canto on a scale even larger than in Catholic
church-service proper.

Hearing those notes again within the Scuola Grande di San Rocco — the
‘Sistine Chapel of Venice’ studded with masterpieces by Tintoretto,
Titian and Tiepolo — was well worth a trip. As to the actual merit of the
performance, one might regret that a few arias were pruned of their da capo, or
that a harpsichord was substituted to the organ stipulated in the continuo
section. Nevertheless, the sparse period band Orchestra Barocca di Bologna,
some ten instrumentalists led by Paolo Faldi, sounded well attuned to style
requirements, with rhythmic stamina and accurate tuning generally deserving
appreciation throughout. 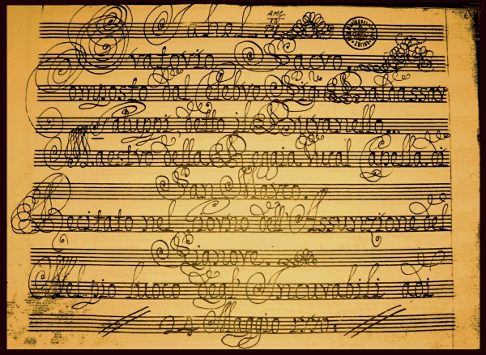 Not all the six singing ladies would have deserved the same applause as
their early counterparts, either out of lacking experience or worn-out voices
(the latter was probably the case for Candace Smith in the role of Sisara). Yet
both sopranos Pamela Lucciarini in the title role and Silvia Vajente (Debbora)
delivered terrific amounts of passagework, competing on a tight edge as to
projection and clarion notes. In the end, Vajente apparently won by a neck
thanks to a clearer diction and to the sensuous rendering of her aria
“Rosa et lilio”, accompanied by a pair of obbligato mandolins. As
Barac, mezzo Elena Biscuola unsheathed lovely dark color, accomplished
technique and dramatic panache. Her climactic duet with Vajente (“Fugato
jam maerore”, just before the final ensemble) was also praiseworthy.

Patrizia Vaccari, a coloratura soprano of considerable experience, delivered
a defiant rendering of “Non horret cor forte”, much in the vein of
Constanze’s “Martern aller Arten”. The taxing
‘storm’ aria for Haber, “Pugnent nubes fulminando”,
emphasized the good natural qualities of young soprano Laura Antonaz, such as
sterling color and easiness in ascending to the highest pitches. Her coloratura
technique needs further refinement, though.