Music composed by Hector Berlioz. Libretto by the composer after William
Shakespeare’s Much Ado about Nothing.

The townspeople of Messina prepare to celebrate the arrival of Don Pedro,
general of the Sicilian army, who is returning from victory in battle. He is to
be received, along with some of his officers, at the residence of Leonato,
governor of Messina. A messenger brings news that the soldiers are about to
arrive and Leonato assures his daughter Hero that Claudio is among them.
Beatrice inquires sarcastically about Benedict, so Leonato (her uncle) explains
that there is a “merry war” between the two.

Hero is in love with Claudio and is overjoyed at his return while Beatrice
and Benedict resume their disdainful sparring.

Benedict, who had assumed Claudio was a confirmed bachelor like himself,
cannot believe that now he admits to being in love with Hero and plans to marry
her. Don Pedro and Claudio tease Benedict by suggesting that he, too, should
consider marriage. He ridicules the notion of wedded bliss, saying that if he
is ever so weak as to succumb, they should put a sign on his house: “Here
you may see Benedict, the married man.”

Don Pedro decides that he will contrive a way to turn the war between
Beatrice and Benedict into a love match.

Somarone rehearses the nuptial song he has written for the bridal couple,
prompting Benedict into an outburst of regret that Claudio has joined the
company of lovers. He hides from Don Pedro and Claudio but they spot him,
giving them the chance to have him overhear a conversation with Leonato in
which they talk about Beatrice being fiercely in love with Benedict. These
words, said in apparent sincerity, work their magic: Benedict declares to
himself that he will requite Beatrice’s love. 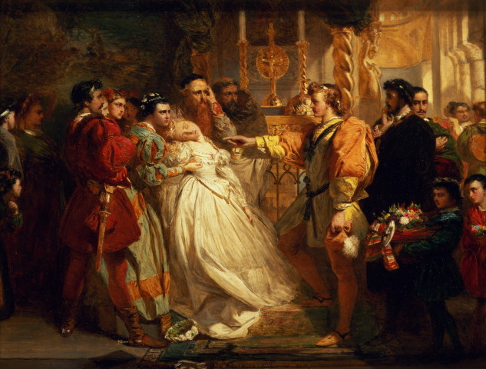 Claudio, deceived by Don John, accuses Hero (Much Ado about Nothing), by Marcus Stone, 1861

Hero and Ursula, her lady in waiting, have played the same trick on Beatrice
that the men played on Benedict. It is a beautiful night for Hero to reflect on
her feelings of love.

The wedding festivities are in full swing, and Somarone improvises a song in
honor of Sicilian wines. All are enjoying themselves except Beatrice, who is in
a state of agitation; the trick has worked. She remembers that after Benedict
left for battle she had nightmares about him coming to harm. She admits to
herself that she loves him.

Hero and Ursula join Beatrice and all three share Hero’s joy on her
wedding morning.

Benedict finds Beatrice and makes his feelings known to her, but she is
unable to cope and the wedding celebration interrupts them. Claudio and Hero
reveal love poems that Beatrice and Benedict have written about each other, so
they both admit their love and agree to a truce—until tomorrow.