The opening night performance
(seen here) offered the expected celebratory mood with festive dress,
champagne, and the house itself decked out in appropriate splendor. The choice
of this staging is also a celebration of operatic history: Zeffirelli’s
original production for a Covent Garden Tosca with Maria Callas was
acquired by Lyric Opera in time for its 2004-05 anniversary season and are used
again now in this festive season opener. 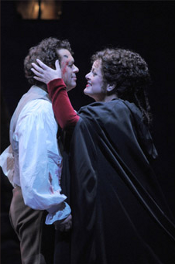 Vladimir Galouzine as Cavaradossi and Deborah Voigt as Tosca

The principal singers in Lyric’s current run (a second cast will be
featured for additional performances in January) include Deborah Voigt as
Floria Tosca, Vladimir Galouzine as Mario Cavaradossi, and James Morris as the
Baron Scarpia. In smaller yet significant roles Craig Irvin sang Cesare
Angelotti, Dale Travis was the Sacristan, and John Easterlin portrayed
Spoletta. As the curtain rose after a brief orchestral introduction, the former
prisoner Angelotti staggered into the Church of Sant’ Andrea della Valle
while seeking exile. Here and in the following scene Irvin showed a believable
desperation, his athletic movements in line with Angelotti’s vocal
utterances underscoring the conviction of his beliefs. The interior of the
church as depicted seems appropriately cluttered for the mix of worship and
artistic project underway in the first act. Once the prisoner hides, the
sacristan enters and busies himself with cleaning as well as credible acts of
devotion and prayer. The painter Cavaradossi interrupts the sacristan with a
bemused look and the famous line, “Che fai?” [“What are you
doing?”]. Galouzine delivered these lines with a tension signaling, on
the one hand, his friendly encouragement, yet on the other his preoccupation
with both worldly and personal matters. As Cavaradossi turns to unveil the
painting of the Madonna, on which he has lately worked, the sacristan
recognizes the features of a woman who has often come to pray. At this point
Cavaradossi sings the well-known aria “Recondita armonia,”
[“What subtle harmony”] in which he muses on the appreciation of
beauty in more than one woman, his final thoughts of devotion settling on the
beloved Tosca. Here Galouzine began with a warm, almost baritonal depth, his
voice blooming into the full tenor range during the course of the piece and
finally ending with pointedly steady and ringing high notes on the words
“Tosca, sei tu!” [“Tosca, it is you!”] From this point
on into the evening Galouzine commanded the stage in those scenes where his
presence required vocal statements of emotional enthusiasm. As a foil to his
passion and introspection, Deborah Voigt’s entrance as Tosca signaled
both feeling and religious devotion, giving way alternately to suspicion, to
ardor, and to faith in the ways of the Divinity. This complexity would then
inform Voigt’s interpretation throughout the remainder of the
performance. After her initial jealous outburst is calmed by Cavaradossi, she
settled into an inspired love-duet, punctuated intermittently by Voigt with
pointed emphases. At times the voice was pressed forte more than
necessary, whereas at other moments, especially in her duet with Galouzine, a
moving tenderness was communicated in a softer vocal delivery. After her
departure and the painter’s reunion and hurried exit with Angelotti, the
stage was again left to the sacristan. Mr. Travis maintained an admirably
steady legato and, in his acting, was skilled at realistic portrayal
without descending into the purely buffo characterization drawn on by
some who have interpreted this role. His interaction with the children entering
the church suggested a lilting respect for position and surroundings. Of course
Scarpia’s appearance is calculated to change everything. As he and his
police henchmen persevere in their search for Angelotti, the musical
accompaniment becomes decidedly menacing. 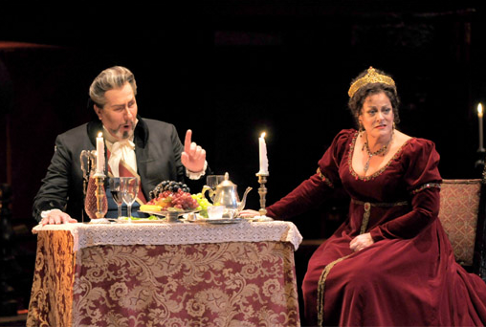 James Morris as Scarpia and Deborah Voigt as Tosca

The Scarpia of James Morris is, in
this performance, decidedly understated, at times lighter of voice than
one’s expectations, yet also communicative through glance, gesture, and
movement. As Tosca returned to the Church, the two engaged in a vocal and
dramatic battle for dominance with Voigt showing full realization of both the
danger and challenge of her position as she once again left. The conclusion of
the act showcased Scarpia in the famous Te Deum scene, Morris again
here blending into a fully populated stage without yet reaching a full
crescendo of power and lust.

That very powerful characterization of Scarpia began its development at the
start of the second act. Here Morris achieved a synthesis of volume and feeling
as he contemplated with relish the possibilities of his amorous conquest. His
address to Cavaradossi showed him to be the ruthless villain whose demise
shocks but seems, ultimately, inevitable. As the trio of principals interacted
during the middle portion of this act, Galouzine again stood out as his voice
rang in thrilling declarations of “Vittoria!”
[“Victory!”] Although his actual torture was cut short by
Tosca’s divulging information to Scarpia, he still remains a prisoner.
She must agree to give herself to the Baron in order to buy safe passage out of
the city for Cavaradossi and herself. In her aria “Vissi
d’arte” [“I have lived for art”] Voigt invested her
delivery with peaks of emotional dedication in order to lend an expressive
fullness to her interpretation. At times the voice responded to this approach,
at others the aria was less effective especially when pitch or volume might
have shown greater control. After Scarpia signs the document for their alleged
freedom, Tosca commits the murder that leads to her suicide at the close of the
opera. Sir Andrew Davis managed orchestral tempos here with a subtlety that
gave a yet deeper impression of Tosca’s emotional struggle before she
hurriedly closed the door while leaving Scarpia dead on the floor of his
apartment.

In Act III of the opera Cavaradossi contemplates his impending execution
until Tosca arrives to give him the news of their safe passage. In these
solitary moments Galouzine’s performance of “E lucevan le
stelle” [“And the stars were shining”] was assuredly a vocal
highlight of this performance. When Tosca appears to tell of her plan and the
price that she has paid, Voigt gives the impression of being in full control,
not realizing of course that Scarpia has betrayed her trust. As Cavaradossi
indeed falls dead from the bullets of the firing squad and Tosca understands
the horror of her position, Voigt continues to display that dramatic control:
she jumps from the parapet to her death only after pushing with evident force a
pursuant officer and causing him to fall backward. As she declares, she and
Scarpia will meet again before God.

All photos by Dan Rest courtesy of Lyric Opera of Chicago