Had the Kent Nagano pit not been appallingly lackluster perhaps some chance illuminations of the Strauss score might have been struck, as was Mr. Wilson’s intention.
Just now, 22 years later Mr. Wilson has struck out again, this time with Monteverdi’s *Orfeo*, a few distinguished early music singers exercising abstracted hand and arm gestures and stilted dance movements, and a well-known *Wozzeck* screeching *Orfeo* in whiteface. Had Rinaldo Alessandrini not been in the pit there would have been no flashes of the Monteverdi genius, and as it was these were reduced to a very few.
The Alessandrini Monteverdi trilogy at La Scala has been eagerly anticipated, particularly after his sublime cycle of Monteverdi madrigals (complete) at the Edinburgh Festival two years ago. Mo. Alessandrini brings a restoration to these old scores much as faded and mutilated Renaissance paintings are imbued with vibrant original line and color through restoration. In the visual arts this is accomplished by complicated scientific process, in the spheres of music Alessandrini must rely on his dramatic intuitions.
He finds infinite colors and timbres to the narrower tones of old instruments and to the whiter production of the human voice. He hones the vowels, carves the consonants and sculpts the phrases of a pristine Italian, and he drives its rhythms and tempos to embrace larger periods. He generates the precise moment when emotion bursts into syllable and sentence. Under Alessandrini’s baton the Monteverdi word does indeed become the Orphic moment.
Robert Wilson is an architect. The art of architecture, it is said, is frozen music. He chose a Titian painting, *Venus with Eros and an Organist*, as his visual metaphor for the world’s first great opera. In the painting two small forests of cypress trees nearly converge in a strong perspective that carries our erotic imagination suggestively beyond the foreground dominated by a lush female nude scrutinized by the male organist twisting around from his keyboard. 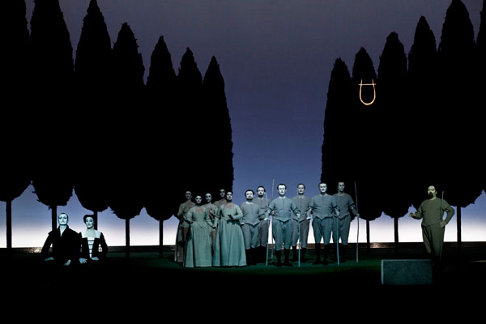 Scene from Orfeo [Photo by Marco Brescia – La Scala Photographic Archives]
In Wilson’s version exactly twelve perfectly shaped trees are carefully frozen into a perspective space through his characteristic hard edge, sculptural lighting. Wilson replaces Titian’s sumptuous foreground nude and the leering organist with his Orpheus who dominates the foreground, rushing back and forth across the stage apron. Titian’s pastoral nudity was replaced by the off-white costumes (the flesh color of Titians’ Venus) that generically covered the shepherdesses and made the shepherds comically plumb-shaped rather than sveltely swain-shaped.
The familiar characters of this well-known myth were presented as elaborately dressed Renaissance mannequins who moved from frozen gesture to frozen gesture, Monteverdi’s tumbling torrents of words stopped in their tracks by Wilson’s motionless visuals. The Messaggera who delivers the emotional account of Euridice’s death was Sara Mingardo, known for her fine recordings with Rinaldo Alessandrini and his Concerto Italiano that have earned her the reputation as the Maria Callas of early music. But for her extended second act monologue she was straight-jacketed by the staging and by a formless black dress, Alessandrini’s simple organ continuo unable to breath life into this great moment of early opera, sadly lost in the vast spaces of this huge theater.
Austrian baritone Georg Nigl was Orfeo. Though a credentialed early music singer he is better known on major European stages as a Wozzeck. He has a sizable voice and persona that is well able to fill large theaters. He lacks both a beautiful voice and a sympathetic presence, thus he was unable to project the strong humanity that overflows much mannerist art and particularly these emotionally heightened Monteverdi monologues. Uniquely, Wilson afforded him the only dynamism allowed on the stage, keeping him prominently moving in the foreground of the stage picture. His positioning on the stage apron sometimes activated acoustical quirks in the Scala auditorium, creating echos that heightened the freakishness of his detached note ornamentations.
Left to his own devices, Alessandrini shone in the sinfornie and the orchestral *ritornelli*, and very nearly got the extended madrigal that closes the second act into the spheres of great music. Other than the discomfort apparent in Mr. Nigl’s delivery of the Italian language, much of the beauty of the language was present in the otherwise Italian cast, though the finely detailed Musica of early music star Roberta Invernizzi was lost in the Wilson staging and in the vastness of La Scala. The Pluto of Giovanni Battista Parodi and the Proserpina of Raffaella Milanesi made no effect, while the Caronte of Luigi de Donato was buried under a silly costume. Only among the solo shepherds were there occasional glints of real, live performances.
Robert Wilson made important theatrical discoveries, and his innovations have enlivened our ideas of theater. He established his moment in the last third of the twentieth century, and is now working to preserve his legacy through the creation of his foundation. Given the formidable scope of his upcoming projects it is apparent that the foundation has become his atelier, and that projects like this *Orfeo* are stamped out in his mold. The sense of theatrical discovery that was once at the heart of his work was not present in his staging of this opera.
Rinaldo Alessandrini is the man of the moment, his discoveries of new depths in old music have uncovered musical vistas yet to be explored in both old and new music. This new sense of music theater deserves an original staging, one that hears this music, a staging that explores the excitement of Mo. Alessandrini’s discoveries rather than forces them into a dated mold.
Michael Milenski