*L’heure espagnole* is a rapid-moving farce, and ConcepciÛn is the pivot around whom all the action revolves. It’s a demanding role for she’s on stage all the time, carrying the action. “It takes a high level of energy to keep going like this for nearly one hour”, says Miss Donose. “I think it’s wonderful how Ravel gets the orchestration to create vivid details like the cuckoos in the cuckoo clocks,it’s so funny. That’s why this opera is done so often in concert, it lives through the music”. She has sung the role in two separate concert performances, but this Royal Opera House production is fully staged, which emphasizes the movement and drama in the plot.
“ConcepciÛn has only one hour in the week when her husband is away, so she has to squeeze all her frustrations into that time”, says Miss Donose, “She’s doesn’t get any attention from her husband, but when she tries to relieve her frustrations, she gets all this unplanned attention from other men so she’s frustrated again”.
Everything spins around ConcepciÛn, rather like the clockwork mechanisms all round her. “Timing and blocking mean a lot in this production. On the very first day, I was told that this production, by Richard Jones, is very difficult, because there are lots of very precise details and they might take a lot of time to get right. Actually, that went smoothly, but it was interesting coming to the character from outside to inside. There are gestures that don’t come naturally to me, but are part of this ConcepciÛn, so I have to make them my own. It’s a process like putting on a costume, you put on those hundreds of small details so they come naturally to you.so you slip into the role.and become the character”.
Because Ravel’s music is so precise, “The ensemble is very important”, adds Miss Donose, “the other characters are much more than caricatures. The poet Gonzalve (Yann Beuron) can’t stop making poetry, and the banker Don Inigo Gomez (Andrew Shore) is solid, like he’s stuffed with money. And the muleteer Ramiro, played by Christopher Maltman, is a strong fellow, who doesn’t do small talk. The clocks aren’t as heavy as they look but they’re bulky and Maltmann has to carry them up and down when he’s singing! ”
“Torquemada (Bonaventura Bottone) lives only for his clocks, they are his only passion, but ConcepciÛn is passion, and so direct” ! Just as Torquemada prefers objects to people, ConcepciÛn uses people as objects to get what she needs. “Husband and wife are on completely different planets. ConcepciÛn is very terre ‡ terre, as the French say, she’s very down to earth so she’s extremely direct. She’s unhappy but determined to get what she needs. In this production, she’s like child who wants a toy and stamps her feet if she can’t get it”. ConcepciÛn’s obsessiveness is not so different from Torquemada’s after all. “I’m not like that”, says Miss Donose, “so all the detailed gestures helped me understand what to do with this character.who is much more single-mined and direct than most women”. 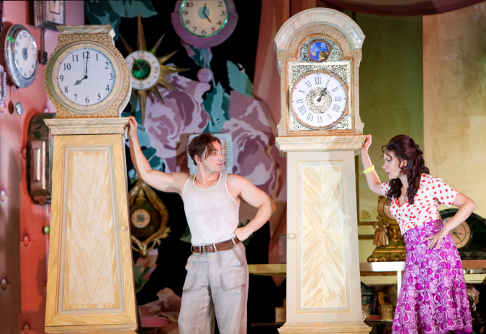 Christopher Maltman as Ramiro and Ruxandra Donose as Concepcion
Ruxandra Donose’s starring role in *L’heure Espagnole* reflects her status as one of the more expressive personalities among the rising generation of mezzo-sopranos. She’s reached the stage where she’s so technically assured that she can focus on developing the characters she portrays. She’s sung Marguerite many times, including with Nagano and Dutoit, and has done many Carmens, Charlottes and even a few trouser roles. Among her favorites though are the Composer in *Aridane auf Naxos* and Cenerentola. In the near future, she’ll be singing a lot of Mozart, Singing these roles is enriching. “It’s a great experience to embody someone you are not yourself, but can create. For a few hours you have a chance to live another life”.
Anne Ozorio