In its third production of the current
season Lyric Opera of Chicago has not only brought together an outstanding
roster of soloists to fill the parts, but the company has also mounted in this
new production a splendid scenic backdrop and sets reminiscent of
sixteenth-century Spain. Renato Palumbo conducted the Lyric Opera Orchestra
with an assured sensitivity for this musical cornucopia of bel canto as well as
weighty dramatic scenes and ensembles. In the title role Salvatore Licitra
displayed both elegant legato and convincing heft in his emotionally driven
arias and participatory scenes. His beloved Elvira, sung in this production by
Sondra Radvanovsky, remains one of those challenging Verdian female roles,
which draw on all reaches of the soprano voice. Ms. Radvanovsky’s command
of the role is admirable for her secure approach in a wide range of carefully
executed techniques and colors, and also for her sensitivity to communicating
through vocal gesture what the character of Elvira senses at given moments. The
remaining lead figures, both in pursuit of Elvira, are sung by baritone Boaz
Daniel and bass Giacomo Prestia. Mr. Daniel portrays Carlo, King of Spain, who
is later during the third act of the opera elected to the status of Holy Roman
Emperor, hence giving a historic anchor to the piece. Mr. Prestia sings the
role of Elvira’s uncle, Don Ruy Gomez de Silva, a character representing
the honor of the old nobility. Silva plans to marry his niece Elvira shortly
after the action commences.

In the first scene of Act I, located in the mountains outside the region of
Aragon, the followers of Ernani sing of the importance of wine and freedom in
this life. From the very start the Lyric Opera Chorus, directed by Donald
Nally, demonstrated a crisp urgency in its support of the action and the title
character’s imminent plans. In his aria “Come rugiada al
cespite” [“As falling dew upon the flower”] Enrnai details
the expected fate of Elvira and his own lamentable future without her presence.
Ernani plans with the support of his men to abduct his beloved before Silva can
marry her. Licitra showed here notably in his first extended solo piece a
careful balance of forte notes used to express passion traced with a
legato decorated gracefully to carry the import of his plan. In his
cabaletta “O tu que l’alma adora” [“O, you whom my soul
adores”] one sensed in Licitra’s performance the conviction that
Ernani’s love for Elvira would support at least the intentions of the
couple. As a mirror to this first scene the opening of the second depicts
Elvira surrounded by a female chorus, here separated from Ernani and awaiting
her fate in Silva’s palace. The well-known cavatina “Ernani
involami” [“Ernani, take me away”] followed by the cabaletta
“Tutto sprezzo” [“ All these I detest”] were together
performed by Ms. Radvanovsky with an elegant and committed line as well as a
matchless instinct for bel canto technique. Her vocal decorations on
“Vola, o tempo” [“Fly, o time”] in this aria were
especially telling as they recalled the earlier melismas and textual
significance of the piece “Involami.” The extended final note in
this cabaletta illustrates the directorial emphasis for combining music and
staging in this production. As Radvanovsky holds this last pitch with defiant
beauty, she strides past the assembled attendants showing disdain for her
surroundings and leaving the chamber with the lyrical wish to be transported
even further away. 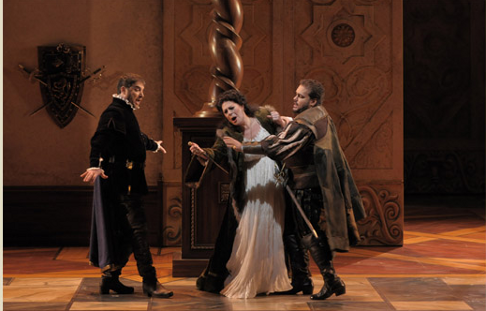 In the next scene of Act I Carlo enters and desires to speak with Elvira in
order to press his suit further to win her affections. In the role of King
Carlo, Boaz Daniel has found an ideal vehicle for his lyrical baritone voice,
at times showing dramatic force commensurate with the dignity of position and
at other moments a melodic line suggesting the sincerest devotion of love or
duty. In his recitative before the duet with Elvira, Carlo laments his
unrequited emotions while clinging to the possibility that she will still
relent. Mr. Daniel’s declamation of rising notes on the word
“ancora” [“yet”] defined a hope that would propel his
actions through the remainder of this and the following act. His ensuing duet
with Ms. Radvanovsky showcased both performers in a magnificently sung variety
of emotions ranging from the noblewoman’s pride to the demands of the
yearning king as melodic suitor. The sudden appearance of Ernani, prepared to
abduct his beloved, sets off a trio together with Carlo and Elvira, only to be
broken by the equally sudden entrance of Silva. Verdi’s symmetrical
structure of aria or set piece followed by ensemble and further complication
was staged with appropriately tasteful sets showing the influence of
Renaissance art work. This symmetry was then complemented by the final
principal, Giacomo Prestia, in the bass role of Silva. He is outraged by the
violation of his family’s honor when Ernani and Carlo are found in the
company of Elvira. In his moving aria and cabaletta, beginning with the words
“Infelice, e tuo credevi” [“O unhappy, and you whom I
believed”] Prestia combined the heroic gesture of noble dignity with the
menacing tone of securely projected basso notes, both leaving a mark of
individuality on the character. Once Carlo’s identity is recognized Silva
cannot deny his hospitality. Ernani is provided a means of escape as the act
ends.

The start of the second act truly demonstrates the coup of staging at
memorable points in this production. Elvira stands with her back to the
audience as the curtain rises. The chandeliers begin to brighten as guest now
arrive for Elvira’s wedding to Silva. Interiors of the hall as well as
the costumes evoke the grandeur of sixteenth-century Spain. When Radvanovsky
turns to face the audience, she holds the dagger and communicates through
anguished facial expression her plan to stab herself at the altar during the
ceremony of marriage. Ernani’s entrance, in the guise of a pilgrim,
complicates the wedding, just as do Carlo’s subsequent arrival and
demands for justice later in the same act. When Ernani learns of the ceremony,
he reveals his identity and offers his life. Only Elvira’s protestations
of her planned suicide calm Ernani to the point of a love duet. Here the
lyrical yearning so vividly expressed by Licitra and Radvanovsky is
interrupted, as before, first when Silva discovers the couple and second when
King Carlo arrives at Silva’s palace. Sine Ernani is hidden under the
protection of Silva, Carlo demands that the young man be surrendered or the old
noble will forfeit his life. The entrance of Elvira provides Carlo with a means
of force. As he now abducts the heroine, one of the vocal highlights of this
act is Daniel’s performance of the aria “Vien meco sol, di
rose” [“Come with me, I shall strew your path with roses”].
Daniel projects the variable nature of the king: after his test of wills and
power expressed against Silva, the ravishing sweetness communicated by Daniel
in Carlo’s song to Elvira as he leads her away remains a convincing
display of his love. After settling their differences, Ernani and Silva now
both join in a conspiracy against the King in the hopes of also rescuing
Elvira. Ernani offers to forfeit his life at the sound of a horn, the choice
and time being left to the discretion of Silva. 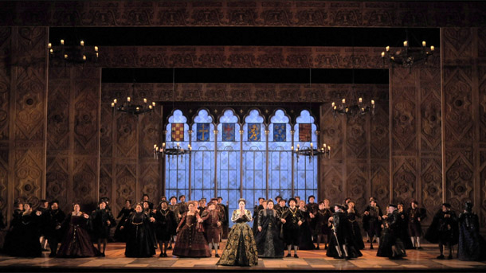 Act III and IV of Ernani illustrate the rising power of the King
and his beneficent forgiveness and generosity. At the same time, the offer made
by Ernani to Silva is ironically called due; the happiness that the hero seems
about to enjoy with Elvira is shattered by his commitment to fulfill his word
of honor. In Act III at the tomb of Charlemagne in Aix, Carlo remains hidden to
await both the conspirators and the result of the election. When cannon shots
announce that he has indeed been chosen as Holy Roman Emperor Carlo steps
forward to confront his detractors. In the spirit of Charlemagne, Carlo
announces forgiveness for the conspirators and relinquishes Elvira to Ernani in
marriage. In the great ensemble ending the act, “O sommo Carlo”
[“I too am Carlo”] the baritone — here standing on the tomb
of his predecessor — leads the remaining soloists and chorus in an
impressive lyrical display suggesting a positive turn to the future for all
involved. As Carlo, Daniel began the ensemble with a carefully intoned
introduction, his voice rising to noble heights of melodic strength as he led
the others to think of the example of the past. Only Silva still vents his rage
and need for vengeance at the close of the scene. The tragedy of this vengeance
interrupts the renewed period of felicity, with which the brief final act
opens. As Ernani and Elvira celebrate their wedding, the calls of the horn
remind Ernani of the vow that he has sworn. Silva’s arrival leaves him no
choice but to take his own life with honor, a decision through which the
protagonists must confront the deeds, oaths, and responsibilities of their
past. The principal singers, chorus, and orchestra in Lyric Opera of
Chicago’s Ernani have created a production that argues strongly
for such continued, fine revivals of Verdi’s 1844 masterpiece.

All photos by Dan Rest courtesy of Lyric Opera of Chicago.