I’m particularly pleased that the ring is in its proper place at the
final curtain. Remember the ring? (as Anna Russell would say.) This
ring is the diamond the Count gives Susanna in the dark in Act IV, as
down-payment on her imminent seduction, never realizing that it is not Susanna
at all but his own wife on whose finger he has placed it. Subsequently, at the
end of the opera, when all stratagems are unveiled, the Countess shows him the
ring is on her finger — and only then is he forced to face, and
publicly repent, his follies — which she forgives — appropriately
concluding this longest and most sublime of buffo operas. In Miller’s
original staging — in keeping, perhaps, with that gentleman’s
professed disdain for sentimental tradition — she did not show
her husband the ring, and he had no reason to believe she was the woman he had
wooed in the dark. In other words, though we knew who was who, the Count never
found out and we never knew what or whether he was repenting. The heavenly
ending became acrid, uncertain, irritating. There was no resolution. Why
bother? Why bother ending the music in the proper key? Why not stop five bars
short at some other note? Because all things are synchronized here, as Mozart
and da Ponte designed them to be, and the palace of Aguasfrescas becomes an
idealized version of our own imperfect world, that’s why. Anyway: the
ring is now on the right finger, shown to the right man at the right moment,
and all’s that much righter with the world.

Another nice touch: Susanna and Marcellina symbolize their new friendship
when they bump heads while heading out the same door in Act III — and we
are reminded of their feud to the death back in Act I — but this time, as
allies, they burst into giggles and squeeze through arm in arm. The effect may
be borrowed from Verdi’s Falstaff (and he set it to music
there), but it wasn’t an original bit with him either: Figaro,
like Falstaff and so much great humane comedy, is about
irreconcilables who forgive and reconcile. The audience also loved it when
Susanna demonstrated the way a “lady” sashays, and
“masculine” cross-cross-dressed Cherubino imitated her — but
the audience (and I) loved that silly flounce when my grandmother took me to my
first Figaro forty years ago.

Whoever is running the surtitles this year, by the way, is clever enough to
know when to let them go dark — so the audience is obliged to look at the
stage — and the laughs may come from the activity going on there —
and they do.

I wish I’d liked the music-making of this revival half as much as I
enjoyed the mugging. None of it was less than major house quality, but few
moments transported me. Ah, where have they gone? Those sweet moments of joy
and pleasure? 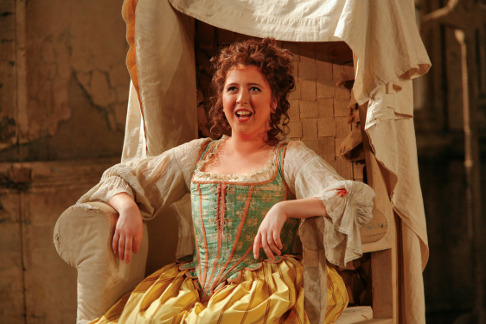 Luca Pisaroni, a lithe, handsome fellow, spry as an acrobat and very much
the self-important barber of Seville, has a dark and pleasing voice, suave
musicality, and his every word means something — or two things —
sometimes three. It is not, however, a voice, on this showing, of supreme power
or authority. He was born to please but he does not overwhelm. Still: This was
a performance of star quality if not incandescent gleam.

Lisette Oropesa’s light, pert soprano and light, pert performance
seemed too American, sassy and shallow, for Susanna, this bride of sense but
also considerable sensibility. Susanna experiences much of the pain that gives
depth to true comedy, when confused by the Count’s advances, or upset by
Figaro’s apparent betrayals. Oropesa’s voice lacks the
heart-stopping thrill, the passion of a girl on the brink of true consummation,
that the finest Susannas bring to the part. “Deh, vieni, non
tardar” was a showpiece, prettily sung — but this is song that must
have feeling in it. Oropesa is not a leading lady yet. 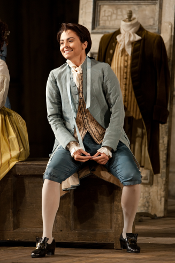 Cherubino got the second biggest hand of the night, after Figaro’s,
and Isabel Leonard, quite the most boyish, adolescently awkward Cherubino of my
experience, earned that hand with her delicious acting. Her singing was
slightly less on target, a bit under pitch in “Non so pi˙,” but I
hope she can build on her good will to give us more feeling in the arias in
time.

Annette Dasch has a sizable, attractive voice, and if a run or two got away
from her during her arias, that is regrettably normal. She played the cut-up
rather than the grand Countess (Countesses are usually one or the other), and
she was funny, which suits most of this production, but one missed
aristocratic bearing, vocal and otherwise. I missed, too, Hei-kyung
Hong’s graceful trick of reclining into visible reverie while singing
“Dove sono” — but it probably isn’t easy to sing
persuasively in that position if one is not Madame Hong. As with many debutante
Countesses lately — and a great many sopranos have made their house
debuts in that role in this production — I sensed that Dasch was giving
it her best shot but would rather have been singing something else. (Her bio
mentions performances as Elettra, Donna Anna and Verdi’s Desdemona, which
are all within the Countess’s fach.)

Ludovic TÈzier made a colorless Count, lacking both the brutality of Dwayne
Croft and the dangerous attractiveness of Mariusz Kwiecien. The Count must have
authority, we must believe he is terrifying — at least, that the rest of
the household are terrified of him — or none of their desperate plots
make much sense. In a production of Beaumarchais’ play some years ago,
Christopher Reeve played the Count, looking as majestic as Apollo — and
then tripping over his own feet in pratfalls all the funnier for their contrast
with his affect. But as soon as he recovered and stood commandingly upright
again, we were once again stirred to reverence and fear — and that should
be our feeling for the Count. TÈzier was gentlemanly (and those damned
scene-stealing hunting dogs are happily gone), and the fioritura in his aria
were graceful if not quite angry, but he seemed too hangdog to be a threat to
anyone. Pisaroni’s Figaro didn’t have much respect for him, so why
should anyone else?

Christophoros Stamboglis, a replacement, sang Don Bartolo. He sang the part
effectively and played it to the hilt, slipping nimbly into the many ensemble
scenes. Greg Fedderly sang Don Basilio well but with a bit — how shall I
put it? — too strong a flame. This is partly the fault of the costume
— it’s hard to be masculine in lavender satin, with pink stockings
and a red wig. Ann Murray made rather a shrill and wobbly harridan of
Marcellina, but was most affecting on finding her long-lost son. Tiny Ashley
Emerson brought an impressive sweetness to Barberina’s lines.

Fabio Luisi led a brisk, well-paced account of the score — nothing
dragged in this long evening of a mad day.