First and foremost, the Royal Opera House’s Rake boasts an A-list cast that is as fine as can currently be assembled. Of especial interest to me was young bass Kyle Ketelsen’s role debut as Nick Shadow. He definitely did not disappoint. Mr. Ketelsen always offers a consistent, rich, and suave tonal delivery and he is possessed of one of the most secure techniques of any voice heard before the public today.
His is a sizable instrument which can easily ring out in the house one minute, and scale back to a hushed, intense sotto voce the next. He bought his usual intelligence and superb musicianship to bear in what has to be considered a major role assumption in his growing repertoire (and reputation). As wonderful as is his vocalizing, Kyle also scores big — make that waaaaaay big — as an actor. In fact, I would be hard pressed to think of any male singer active that is his equal for stage presence, character delineation, vocal color, uninhibited movement, and dramatic understanding. The card scene could have served as Masters Class in theatrical nuance.
Repeated performances and even more experience will only deepen his already commendable interpretation. You heard it from me: Kyle Ketelsen will be the Nick Shadow of choice for future productions. I am not alone, the entire audience roared its approval with a vociferous ovation.
Happily, he was in great company. Toby Spence as Tom Rakewell served up splendid, secure singing all evening, and he managed to touch me deeply in his final scene as no one has before. My previous outing with the staged opera was limited to two disparate but troublesome productions in Aix and Salzburg respectively, but both starring the late Jerry Hadley in one of his best roles.
Although Jerry had more squillo in his voice, the concepts sadly kept him on the surface of the role. Mr. Spence was able to delve deeply into the character’s psyche, and while he appears and acts suitably boyish, his real-time maturity has been deployed effectively in defining Tom’s life journey and descent into madness.
He is a highly accomplished lyric tenor to be sure, but like many such well-schooled light voices, the artist can be counted upon to deliver more in the area of consistency of pleasing tone, than can be easily offered in terms of varied dramatic utterance. It is to his credit that he used his considerable acting skill to create a plausible illusion of varied tonal color. 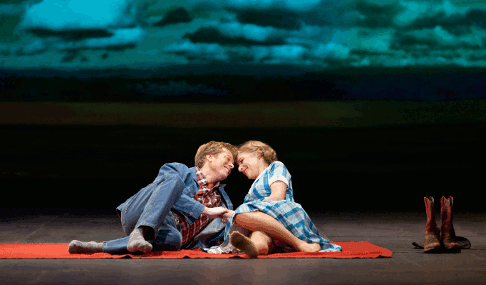 Toby Spence as Tom Rakewell and Rosemary Joshua as Anne Trulove
Another brilliant lyric voice and vibrant stage presence was on hand in the person of Rosemary Joshua’s Anne. This wonderful artist goes from strength to strength and she, too, has an awesome arsenal of technical skills at her command. Just listen to her soaring fearlessly through the most angular phrases and meandering melismas, and then turn around to melt our hearts with utterly focused limpid singing of the first order. Kate Royal had been advertised for the part, but while Ms. Joshua offers a slightly more mature take on the role, she is slim, lovely, and still has the Wow Factor for me, as when I first heard her Cleopatra in Miami and said “Wow, who is this fabulous soprano?”
Patricia Bardon, a veteran of the 2008 mounting of this production, returned as Baba the Turk and successfully managed her rich bottom range and ringing top to deliver a fully committed traversal of one of opera’s most unique characters. She looked smashing, too, pulling off the difficult task of being bearded but yet seeming alluringly sexy. Stalwart comprimario Graham Clark treated us to a vocally secure and theatrically vibrant turn as the auctioneer Sellem, and company principal Jeremy White was solid of voice and stature as Trulove. Frances McCafferty seemed game to do anything (and did) as a randy Mother Goose, although there were a few frayed notes at the extremes of the range.
The orchestra had a remarkably fine night, not only playing the rhythmically challenging score cleanly, but also investing Stravinsky’s masterpiece with all the vibrant panache and passion it needs to make its mark. This can be attributed to the controlled baton of Ingo Metzmacher. I have encountered the maestro’s work on several occasions now. He is never less than inspired, and his musical stewardship is never less than remarkable. It is pleasure to watch his star on the rise. 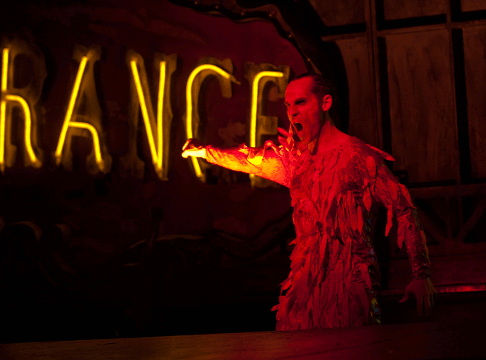 Kyle Ketelsen as Nick Shadow
Stage director Rober Lepage is always preceded by his large reputation, and for once it is a reputation founded on thoughtful experimentation informed by a respect for the original work. Mr. Lepage’s interpretation of this challenging piece is never less than hugely entertaining and ultimately it is enormously affecting. He has managed to find the honesty in Auden’s dark humor, and delivered some well-calculated laughs all the while retaining the underlying serious narrative. He was ably abetted in this fanciful pursuit by the witty set design of Carl Fillion; the colorful, characterful costumes by FranÁois Barbeau; and the evocative lighting devised by Boris Firquet. (It should be noted that Sybille Wilson has directed the revival, presumably with fidelity to the original staging.)
The production team has loosely devised their vision around a concept of Hollywood in its (now-) glorified heyday, with nods to such iconic films as Sunset Boulevard, The Snake Pit, Destry Rides Again, A Star is Born, among others. Nick Shadow is presented as an old school film director, a veritable Cecil B. De-vil, often riding herd and riding high over the proceedings from a camera crane and therefrom controlling the fates of his players.
This decidedly allowed for many images of great resonance, and some wholly engaging set changes which we came to anticipate with relish. I will never forget the slow inflation of Tom’s blow-up Hollywood star dressing trailer, or the disappearance of the lasciviously poised Goose and Tom as they sunk through the center of the red draped bed to the depths of the trap door, nor Anne’s goofy convertible car ride with scarf billowing in the breeze.
However, it has to also be said. . .it didn’t quite work as a totally integrated piece of theatre. At the end of the day, had I not read the program notes I might not have grasped this overall conceit until we were well into the piece. Unlike the recent Fanciulla in Amsterdam that established its intent early on to tap into Old Hollywood images, this Rake apparently began on a flat plain with an oil derrick in . . .where? Texas? Oklahoma? I was willing to go with that, but it soon seemed a red herring of sorts. When we finally start to get it, we wasted some time and attention playing catch-up in retrospect. 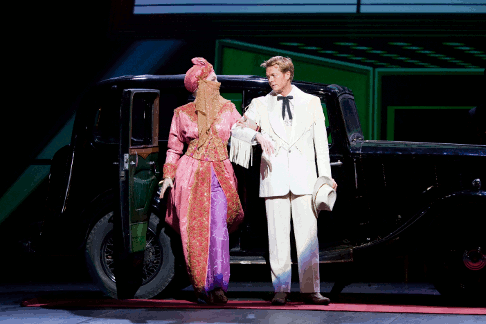 Patricia Bardon as Baba the Turk and Toby Spence as Tom Rakewell
Nevertheless, it cannot be denied that The Rake’s Progress was a highly diverting, conscientiously considered, and wholly professional evening at the opera. By assembling a world class cast and pairing them with its usual awesome musical and theatrical assets, the Royal Opera House has once again reminded me that it is Europe’s premiere company.
James Sohre