The industrious Heidelberg City Theater is to be commended for excavating this early 18th century curiosity, composed by Giuseppe Porsile in 1726 for the Emperor’s Carnival celebration in Vienna. After considerable popular success, *Spartaco* (perhaps unfairly) disappeared. But just like Evita’s body, or a bad penny, it has now re-surfaced, alas tarted up in a mounting that aspires to be moralizing, scolding, Shabby-Chic but which only manages to succeed with the pre-hyphen portion of that label.
Happily, this performance lacks for nothing musically as it is exceedingly well sung and played. The period band assembled from the ranks of the Philharmonic Orchestra of the City of Heidelberg augmented by Baroque specialists gave great pleasure and offered variety and consistency in equal measure under the propulsive baton of Michael Form. There were especially fine contributions by Julian Behr (theorbo) and Marc Meisel (continuo). At the very end of the evening, a sudden welcome addition appeared with a brilliantly accurate piccolo trumpet solo by Laura Vukobratovic. Maestro Form seemed in good sync with his talented singers and instrumentalists and they collaborated to fine effect.
Perhaps the very recent financial scare that threatened to actually shut down the Stadttheater looms over the operation still. How else to explain the junk pile approach to the overall set “design”? I am not bothered by seeing an unadorned stage with all the rigging and escape doors in full view. But I take issue with the deliberate ugliness of all the motley, disparate, and worn out pieces that clutter that playing area. Well, it is not quite completely bare since a large projection screen dominates the upstage playing space fronted by a platform, and (uh-oh) contemporary microphones on stands (be afraid, be very afraid). The tawdry props and dressing seem to have been collected from the curbside, one step ahead of the garbage trucks on bulk trash pick-up day.
Ben Baur is not only on the blame line for this scenic hodge-podge, but also for devising the costumes. Drawing on the opera’s Carnival associations, he has attired most of the cast in what seem to be homemade costumes such as people without taste might throw together in an attempt to be “wild and crazy.” You know, you’ve seen them. They are of the ilk of pulling patterned underwear over outerwear, painting on freckles with mom’s mascara, and wearing Doc Martins with a tutu. While I made that up, none of it would have been out of place here or any less meaningful. Young Mr. Baur has some wonderful credits to his name, and it has to be said that Vetturia’s historical gown, wig, and crown were fetching. And even the clowns (yes, clowns, God-help-us) were visually arresting. Would that the rest of the cast had been treated to as much consideration, for their characterizations were not helped by their “look.”
Perhaps all of this could have had more impact had it been compellingly lit, but with no lighting designer even credited, the unimaginative wash and clumsy area lighting effects contributed nothing to the staging. Perhaps the Rococo Theatre has severe technical limitations? Although I did not much enjoy the content of Stefan Butzm¸hlen’s videos (or even see the need for them) they were in fact very professionally created. Highlighting just one of the movies, screened over ballet music: rowdy clowns have a take-no-prisoners cream pie fight. Yep, Bozo is up there hurling those pastries hither and yon, while the plot stops. Oh, and then two of the film actors force feed a piece of pie to a down-and-out street person crashed on the sidewalk in front of their house. 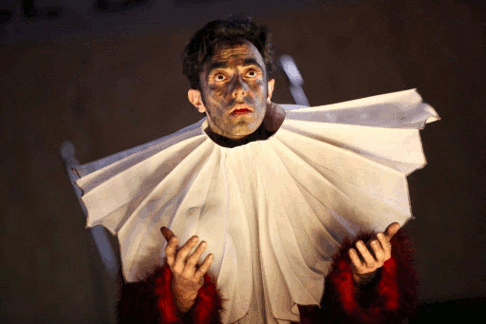 Emilio Pons as Spartaco
The responsibility for this clutter must be laid at the feet of stage director Michael von zur M¸hlen. Apparently borrowing from the titular hero’s slave status, there is a concept at work that decries oppression and slavery (and well, who can disagree with that, hmm?). But Herr v.z. M¸hlen is not content to play the opera straight to make his point, but grafts on amplified shrill prose diatribes, made up out of whole cloth, shouted by three extraneous clowns. Part Stephen King’s evil *It,* part Clarabelle with a wireless mike, part Emmet Kelly in need of a distemper shot, actors Judith Achner, Alisabeth Schlicksupp, and Richard Hoppart strive to be ominous and creepy, but wind up being strident and irrelevant. In addition to these scripted ‘improvements’ to Posile’s opera, we are also subjected to the insertion of the rock recording “Wake Up” by Rage Against the Machine. Oh, and the cast passes the text around a dinner table and reads the lyrics to the finale instead of actually singing the concerted number. There are at least 25 minutes of additional, extra-musical material/scenarios dragging down the show’s considerable musical values.
Mr. Director, sir, there is a fine line between “shock” and “schlock.”
Which leads me to posit the question: If you don’t trust the inherent quality or message of the material, why bother? Why not make up something wholly new? Why subvert someone else’s hard work? This is facile, feckless, free-loading pretense, and it serves neither the talented performers nor the audience, as evidenced by the number of empty seats that only increased after intermission. But. . . may I return to praising the truly gifted performers? 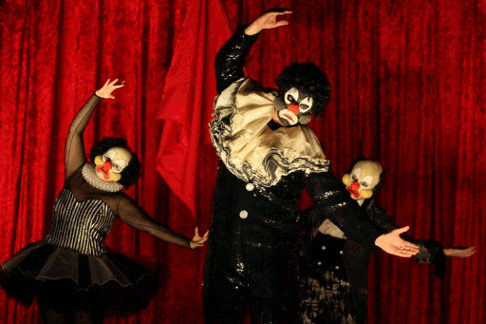 The Clowns
In the title role, young tenor Emlio Pons revealed a highly appealing lyric voice, good stylistic acumen, and meticulous passage work in the fierier outbursts. His pleasing instrument goes easily above the staff, and he acts affectingly with the voice without ever sacrificing sound technique. On the “short” side of “tall” he nevertheless commands the stage with an easy, natural presence. Even when he is asked to do un-natural or insulting things. Like stand on an upended beer case to raise him above the height of his female co-stars. Or like taking off his clothes for all of Act Two.
That’s right, in his first aria at the top of Two, Emilio strips off every stitch of his Home-Made-Fasching-Faux-Centurion gear and plays the entire second act in the altogether like a nudist in search of a camp. Eye candy it decidedly may have been, but can you imagine Domingo submitting to this? (Would you want to???) Adding to the mutual discomfort, Mr. Pons eventually toted on two white plastic buckets and then proceeded to slather his body with. . .what? Mud? War paint? Godiva chocolate sauce? Eventually, his face was crudely got up like Al Jolson about to address Mr. Interlocutor, and he donned a clown ruff, paper Bart-Simpson-hair-do crown, and furry red overcoat meant to suggest a royal robe. But the dang fur-piece persisted in flapping inelegantly, contributing yet another distracting effect of Penis Peek-a-Boo. I am not sure that an artist this fine has ever been made to be so audaciously displayed.
Camilla de Falleiro was a bewitching stage creature as a love-lorn Gianisbe. This charismatic soprano contributed spot-on singing all night and conquered the high-flying challenges of her multiple arias with aplomb, offering crystal clear tone, beauty of sound, rapid fire coloratura, and warmth of personality. This was top-quality vocalism. Yosemeh Adjei has a very distinctive counter-tenor, his well-schooled treble laced with real bite and snap. He runs the risk of verging on edginess, but this is an exciting instrument. And he is a lively stage creature, filling his scenes with agile activity. He also got to show off his gym bunny torso in a square-off duel with the Popilius of Franz Vitzthum, another exceptional counter-tenor who commands a flexible range, creamy rich tone, and stylish phrasing. 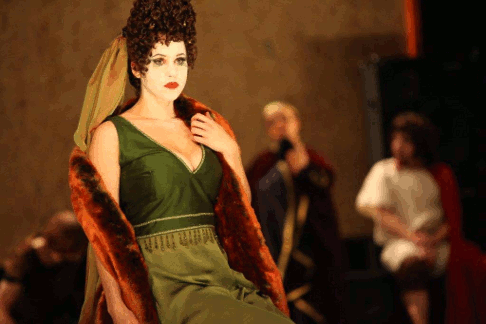 Annika Ritlewski as Vetturia
Annika Ritlewski scored all of Vetturia’s musical points with her ample, womanly soprano, and provided even singing at both extremes of the range. Mariale Lichdi treated us to some bravura moments, and her pleasant timbre and assured technique were surely appreciated. Too bad Ms. Lichdi was hindered by being the director’s “symbol,” or rather two of them, impersonating first Rosa Luxemburg and then (no kidding) Ulrike Meinhof (yes, of the Red Faction Baader-Meinhof Gang). While baritone Sebastian Geyer was indisposed, he animatedly acted the role of Trasone while Lisandro Abadies provided richly detailed singing from the pit.
What of the piece itself? The production certainly short-changed us in making an informed decision, but there were many attractive set pieces that were beautifully rendered. There seems to be considerably more pleasure to be mined from Pisole’s *Spartaco.* I certainly would welcome the chance to experience another production of it, shorn of all the pseudo-socialist, politically provocative associations that have weighted down this clumsy rendition.
Halfway through Act Two, handbills rained down on us from the top tier that read: “We don’t want a piece of cake, we want the whole bakery.”
With the “whole bakery” thrown randomly on stage, including the kitchen sink, far too little time was spent savoring the one succulent piece of Kuchen that might have been the **composer’s** *Spartaco.*

All photos courtesy of Theater Heidelberg