It says a great deal in her favor that in
her sensitive and passionate account of the title role, Shu-Ying Li holds her
own against such competition. For example, a great circle dominates the
backdrop — red against white for the rising sun or the Japanese flag as
the opera opens, turning black against red when the Bonze denounces his errant
niece for renouncing her ancestral gods, then white against serene blue for
moonlight during the great duet that closes the act. 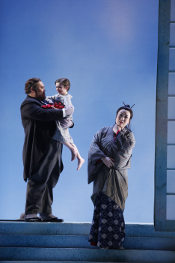 There are few props on the wide, bare stage, and therefore those we see
possess greater significance. The tiny ancestral gods that Pinkerton scorns as
“dolls” are placed stage center, as on an altar, during later acts
of the story — first for Butterfly to ignore them, preferring the
wide-awake American god, then for her to atone before them by hara-kiri when
she has lost honor, child and everything else. A fleet of tiny red
“warships” floats like a flock of birds above the stage at
curtain-rise — to be echoed in Act II by the toy ship Sorrow plays with.
A telescope is not merely functional, permitting Butterfly to stare at the
empty harbor of Nagasaki, but also symbolizes her undying hopes.

The traditional screen behind which the heroine kills herself does not
appear — instead she shows her gumption (and forfeits a pathos playwright
David Belasco and composer Puccini both wished to claim) by turning about to
slash her throat in her faithless lover’s face, precisely as Pinkerton
enters and after his desperate, perhaps repentant cries of
“Butterfly!” This confrontational death is an excess. Butterfly, as
Belasco and Puccini conceived her, may be a convenient myth, a construction of
the guilty Western colonialist conscience, but that is how they created her; to
turn her final act into an expression of vendetta, a spitting in the face of
her oppressor — the man she has entirely loved hitherto — seems an
intrusive modern afterthought. We may have been patronizing when we took
Cio-Cio-San to our hearts — but this resentful figure, this image of
hate, will not win our hearts at all. 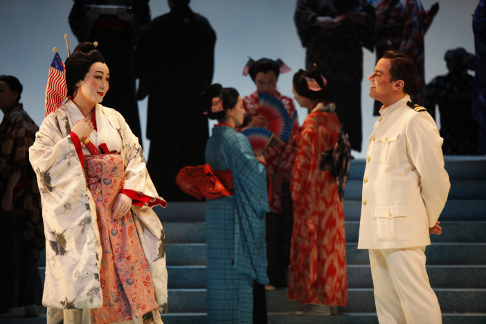 Shu-Ying Li has a large and genuine Puccini soprano of great beauty, but
there is a certain unsteadiness until it warms up. Her entrance was not
luminous, but the duet was, and many other soaring phrases as well. Her
Cio-Cio-San was a complete portrait, each line part of the whole, not the
collection of pretty excerpts it can become. She is a tall woman and does not
move like a small one, and in her enormous wedding kimono she all but dwarfs
her Pinkerton, but the robe is soon removed — it is present, hanging on
rods, for the rest of the opera, a visible symbol of her past — and in
slimmer robes she manages to appear becomingly frail. 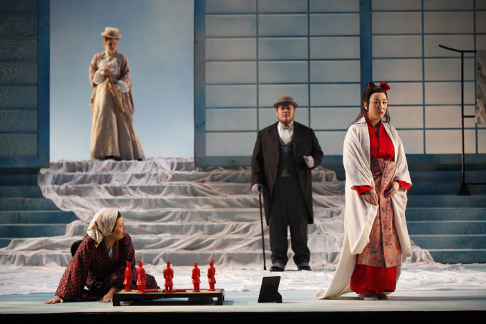 Broad-shouldered Steven Harrison was, like most modern Pinkertons, cast in
the shade by his Butterfly. The role may be thankless, an exemplary cad, but he
should be a robust cad and Harrison sounded provincial. Nina Yoshida Nelsen
sang an effective Suzuki, especially impressive in the Flower Duet and the
penultimate trio. Quinn Kelsey’s Sharpless possessed — not only
because of his size — a real presence, so that one accepted the judgments
of this involved, sympathetic observer as more than the official boilerplate
they can seem. Little Eddie Schweighardt made one of the liveliest Troubles
I’ve seen, whacking Jeffrey Halili’s Goro with a fan and chasing
about the stage with his toy boat.

George Manahan drew a precise and lustrous account of the score from his
orchestra, full of Italian Wagnerism in the way melodies were foreshadowed,
then foregrounded, then fragrantly recollected to remind us of joys past or
hint at doom to come.