what with this and The
Gambler, things seem to be looking up, following a dispiriting spell
in the Christof Loy doldrums. Indeed, the theatrical and musical magic woven
here could not stand further removed from the pretentious dreariness inflicted
upon new productions of Lulu
and Tristan
und Isolde. Bill Bryden’s production of The Cunning Little
Vixen was first staged in 1990 but, twenty years on, it is yet to look
tired. For this, William Dudley’s designs deserve a great deal of credit.
There is to action and staging a crucial sense of life, in all its complexity,
never more ambiguous than when it is apparently straightforward. The
life-cycle, human or animal — should the distinction even be made?
— is the guiding force, in every sense, of Jan·ček’s drama,
and so, appropriately enough, one sees a huge circle on stage, which provides a
treadmill for walking as well as a frame in which the first act’s
acrobatic ‘Spirit of the Vixen’ may swing. Here, form is wondrously
imparted to the Vixen’s dream, both for the eye and the ear. Humour,
arguably more immediate, if less idiomatic, when sung in English, was present
too, for instance in the portrayal of the clannish farmyard hens, large and
contented, unable to heed the Vixen’s siren-voice of feminist revolt. It
is, however, the interplay between wondrous machinery and Nature that
penetrates to the very heart of the opera. This both highlighted such
relationships in the score and put me in mind of another Royal Opera
production: David McVicar’s Magic Flute — never more
magical than when heard under Sir Colin Davis (available on DVD). Lighting
(Paule Johnson), colours, and scenery ensure that Nature is present,
overflowing in her abundance, without being domesticated or prettified; for
there is wildness aplenty in Jan·ček’s score, and this must be
reflected in the action. 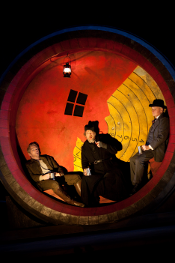 (Left to Right) Christopher Maltman as Forester, Jeremy White as Priest and Robin Leggate as Schoolmaster

It must, of course, above all be expressed by the orchestra, and so it was
here. The name of Sir Charles Mackerras is so indelibly associated with
Jan·ček’s music that one might take for granted his excellence.
However, I doubt that even the most jaded listener — note that one must
listen, rather than passively consume — could have done so in this case.
The angularities of Jan·ček’s score, so often ironed out by
conductors not so intimately attuned to the idiom, were immediate and telling,
but they were always integrated into a longer line, never aggressive, let alone
exhibitionistic, for their own sake: the opposing temptation to smoothing out.
Equally apparent, and again never merely for their own sake, were the ravishing
beauties of the score’s extraordinary sound-world — extraordinary
even by Jan·ček’s standards. One example would be that utterly
characteristic high string sound, split into several parts, which one might be
tempted to call Straussian, but which is in reality quite different, if
anything more akin to the Schoenberg of Gurrelieder. (Jan·ček
was greatly interested in the music of the Second Viennese School.) Building of
climaxes was masterly, above all in the great, pantheistic conclusion, so
redolent, or rather prophetic, of the Glagolitic Mass. Life goes on,
yet is transformed, transfigured. Tension had sagged slightly, I thought, both
on stage and in the musical performance, during the first half of the third
act, but this conclusion certainly compensated. As Sir Charles’s
aforementioned knighted colleague sounds so effortlessly right in Mozart, so
does Mackerras in Jan·ček. How odd, then, that this was the first time he
had conducted the work at Covent Garden, though not quite so odd as the fact
that Bryden’s production has no predecessors in the house. (Having said
that, The Cunning Little Vixen received its Paris
premiere as recently as 2008, and then in a production borrowed from
Lyons.) 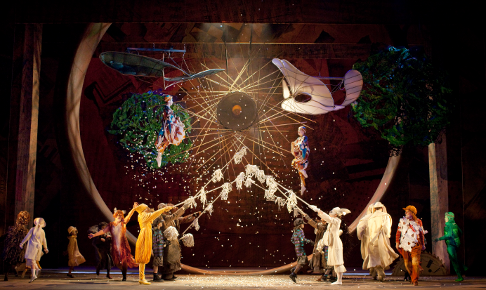 A scene from The Cunning Little Vixen

If Mackerras and the orchestra, which throughout played superlatively, a
match for any other ensemble, were the brightest stars in the
firmament, then they were ably supported by much of the cast. Most impressive
of all was Christopher Maltman, whose Forester grew in stature, as he should,
as the work progressed. The final transfiguration was as much his as the
natural world’s. Elisabeth Meister, a Jette Paker Young Artist, had
originally been slated to sing the roles of the Rooster and the Jay, but had to
replace Emma Bell at very short notice, the latter having been rushed to
hospital for an emergency appendectomy. Meister proved a winning replacement,
moving in her love for the Vixen: an anthropomorphic fantasy, maybe, but an
irresistible one. Sadly, Emma Matthews brought no especial individuality to the
title role, though she did nothing especially wrong either. Many of the smaller
roles, however, were sharply etched, most memorably Matthew Rose’s
poacher, Harašta, Robin Leggate’s lovelorn Schoolmaster, and
Jeremy White, both as priest and badger. The children, drawn from various
London schools, did not disappoint either.

Performance in English did not disconcert me as much as I had feared. There
is loss, of course, in terms of the music’s relationship to the
language’s speech-rhythms, but this registered less than it had during ENO’s
Katya Kabanova earlier in the week. Perhaps it was a better
translation; there was certainly more opportunity, often very well taken, for
wit. Banking jokes may be easy, but sometimes we should be grateful for any
weapon we have. One gripe though: why start at 8 p.m.? It made no especial
difference to me, but a 7.30 start would have been of help to those who had to
travel out of London, or who simply wished to dine a little earlier. Such
practical reservations should not detract, however, from a triumphant return to
form for the Royal Opera.

The Cunning Little Vixen will be broadcast by BBC Radio 3 on
Saturday 15 May at 6 p.m.

All photos by Johan Persson courtesy of The Royal Opera House