Should they talk or
should they shush? Was it time to recharge the cell phone? Would that
just sound like more of Shostakovich’s raucous, blurting score?

True, no one was singing at that moment but people hardly do sing in this
opera, and the leading character — Kovalyov, a faceless bureaucrat who
has just awakened to discover that he is noseless as well — performs much
of his role in falsetto or in oaths and exclamations and excited jabber. Paulo
Szot, who’s been singing Ezio Pinza’s role in South
Pacific next door to great acclaim (with a microphone) might not be
impressive as Don Giovanni in so huge a house as the Met, but he’s
splendid in what is largely an acting part and in a staging that stints nothing
on the acrobatic shenanigans it demands of all the performers. The actual title
role — Kovalyov’s nose, portrayed by Gordon Gietz — runs
about committing antics, getting into fights, picking up strange women, but
hardly sings at all except when impersonating an officer.

When the opera premiered in 1930, Shostakovich had the happy advantage of
being certain everyone in his audience — and every literate Russian
— would know Gogol’s classic short story by heart, and therefore be
able to follow the surreal twists and turns of a plot that echoed Gogol’s
in detail. (Those planning to attend might want to read the story, too —
it’s easy to find on the Internet.) Much of the opening night audience
appeared to be Russian, but those who were not were often uncertain whether
director/designer William Kentridge was making fun of them or just being silly.
Madly inventive as his creations are, Kentridge was following Gogol (and
Shostakovich) pretty closely in the storyline, though his sets seemed more
inspired by the “Constructivist” epoch of early Soviet art during
which Shostakovich wrote the opera.

You may or may not care for Shostakovich’s anti-lyrical —
indeed, anti-operatic — score, which lacks the yearning, emotional center
that endears his Lady Macbeth of the Mtsensk District, composed four
years later, to audiences around the world. In any case, here we have an
appropriate production for this strange, unoperatic opera. This isn’t the
only way to present it, but it’s a way that takes the work seriously and
deals with it in terms of contemporary stagecraft. The contrast to, say, the
awkward, undramatic production of Verdi’s Attila that premiered
at the Met a week earlier was striking: Though often handsome, nothing about
that staging suited the opera being performed or helped make sense of it to a
public who did not know it. The Met, it seems, will only suit the production to
the work if that work is modern and alien to grand opera tradition. 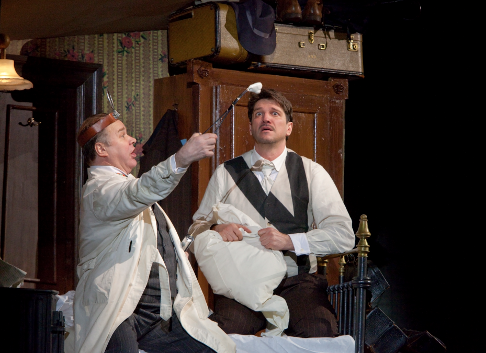 Paulo Szot as Kovalyov and Gennady Bezzubenkov as the Doctor

The set of The Nose is a wall of newsprint and graffiti,
crisscrossed by bridges and inset with rooms, houses, offices, railway
stations. The newsprint with its excitable but meaningless headlines seems to
emphasize that the events of the opera are at once the very latest news and as
insignificant as the filler of so much popular journalism. A man’s nose
has run off — or been sliced off by a drunken barber (Vladimir Ognovenko,
growling superbly) — and the hapless legal owner has pursued the runaway
appendage to church and been snubbed in his polite request that it return to
its place. The nose has not even admitted to working in the same bureaucratic
department! And now our hero hardly dares approach the haughty lady whose
daughter he was hoping to marry because — well, it’s plain as the
nose on your face — he really can’t right now, can he? The
authorities are unsympathetic and the newspapers will not print this story,
even as a paid advertisement — he might be faking it, after all —
and when the police do apprehend the runaway schnoz (attempting to
leave town with a passport to Riga), poor Kovalyov has to bribe them in order
to get it back. And then, at first, it won’t stay on!

Gogol’s depiction of the dullness and egocentricity of everyone in
this world when faced with impossible events is precise and funny — and
a forerunner of such writers as Kafka, Borges, Calvino and Barthelme.
Shostakovich has set the tale with fiendish glee, in percussive explosions and
astringent parody of popular song styles. The instruments often seem to sneeze
or whine or fart as much as they play music. Pretty “vocalism” is a
sure sign of hypocrisy — as in the case of the snobbish mother and
daughter, sweetly sung by Barbara Dever and Erin Morley, or the police
inspector serenely warbled by Andrei Popov — or of brainlessness, as in
the charming serenade sung to balalaika by Sergei Skorokhodov as
Kovalyov’s uncomprehending valet. Claudia Waite is both the
barber’s shrewish wife and a bagel-seller raped by the police (a scene
very like the rape of Aksinia in Lady Macbeth), Gennady Bezzubenkov is
Kovalyov’s unsympathetic doctor, Adam Klein is Kovalyov’s
sympathetic friend. There are twenty minor parts in the passing parade Kovalyov
encounters — all too busy with their own problems to notice his —
and all of them seemed to be sharing the high old time. 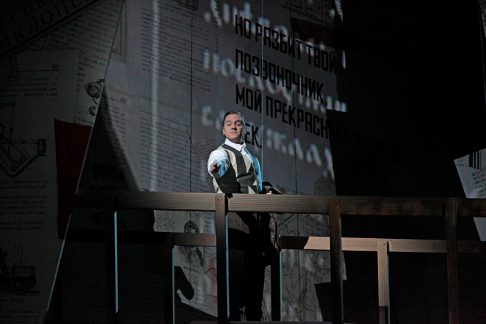 Gordon Gietz as the Nose

Yet, well before the end of the evening one tired of the shenanigans of both
plot and score. Gogol’s story is short. So is the opera (less than two
hours when played, as here, with no intermission), but I can’t say it
flew by — it’s draining. One joke, since there is never an
explanation for it, hardly sustains an entire evening.

All the singers and actors and dancers merited their applause, but the
musical star was Valery Gergiev, who kept the joint jumping from start to
finish with an energy that never seemed to wear out. It wore me out,
but Gergiev could clearly have played a few Shostakovich symphonies as
encores.