What fitter words to describe Mark Morris’s L’Allegro, Il
Penseroso ed Il Moderato which, 22 years since it first amazed audiences
at the ThÈ‚tre de la Monnaie in Brussels, still has the power to incite wonder,
astonishment and joy.

Handel’s pastoral ode is a musical reflection upon Milton’s
philosophical meditations on the gregarious, the introspective and the balanced
modes of living. His librettist, Charles Jennens, (best known as the librettist
of The Messiah), selected and assembled Milton’s poems
sequentially, and added the text for Il Moderato; Morris re-arranges
once again, moving continually but naturally between contrasting states, the
frolicking lightness of L’Allegro tempered by the brooding
melancholy and pensiveness of Il Penseroso; and he adds two movements
from Handel’s Concerto Grosso Op.6 No.1 to serve as an overture.

Music’s power to express emotional states, or affekts, and to
produce ethical responses in the listener, was an essential thesis of the
seventeenth-century artistic and spiritual imagination, and one which continued
to be upheld by eighteenth-century composers of opera seria. Here,
Morris seems almost literally to lift the notes from the page as his dancers
physically embody the rhythms, textures and figures of the musical score; his
forms present a stunning visualisation of the way music can initiate or allay
particular passions and sentiments. And, in so doing, Morris reveals his own,
oft-remarked, innate musicality and, more especially, a profound appreciation
of the architecture and ethos of baroque musical forms. Rigorous, mathematical
choreographic structures are interlaced with ornamented mannerisms and deviant
whirls; gestural clichÈ sits happily alongside surprising idiosyncrasy.

Morris is ably supported by his designers. The warm lighting (James F.
Ingalls) effortlessly matches the modulations from light to shade, from clarity
to opacity, of Morris’s sequence; it is complemented by Adrianne
Lobel’s simple but purposeful conception of the literal and philosophical
spaces suggested by text and score – the dancing arena now foreshortened, now
extended, almost imperceptibly, by an airy array of descending drops and
gauzes. Christine Van Loon’s costumes gladly conjure the pastoral
simplicity of classical nymphs and shepherds, the muted pastels of ‘Part
the First’ giving way to more vibrant tones in the latter half.

William Blake’s nineteenth-century illustrations of Milton’s
poems are cited as a visual influence; but also evoked are the stained-glass
windows of a gothic cathedral, panes of many and contrasting colours through
which the light reverberates illuminating tales in rich tapestries — such
windows as Milton himself described in Il Penseroso, ‘Storied
panes richly dight’. 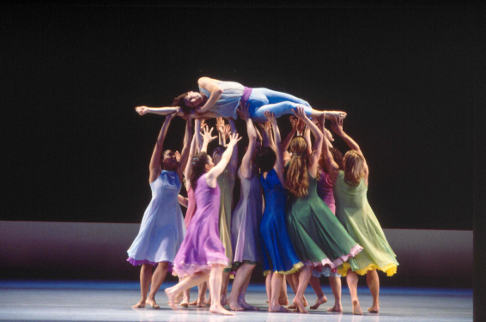 Indeed, the intersection of the vertical and horizontal in Morris’s
forms, and in Lobel’s shifting panels and flats, does suggest the
meeting-point of heaven and earth, of spirit and flesh, as expressed in the
perpendicular architecture of the seventeenth century. Most fittingly then,
Morris combines narrative with abstraction for in so doing he combines
qualities inherent in seventeenth-century verse, with its integration of the
human and heavenly, with those of eighteenth-century music, with its preference
for metrical regularity, abstract universality and conceptual clarity.

To focus overly on such weighty matters is, however, to overlook that in
this collection of more than 30 dances, gravity is equalled and occasionally
challenged by Morris’s trademark wit and irony. In an hilarious hunting
scene, three leashed dogs pursue fleeing foxes, pausing momentarily to urinate
under a tree; even in such wry fun there is beauty, as the changing landscape
is simulated by dancers evoking gnarled branches which form and re-form almost
imperceptibly before our eyes. Elsewhere seriousness is alleviated with
irreverence, as Morris makes playful reference to the formal salutations and
farewells of baroque custom and dance. Throughout there is effortless fluidity
between change and stasis, speed and stillness.

The work comprises a rich assortment of solos and ensemble pieces, including
a startlingly complicated ‘canon’ for three pairs of dancers
— momentarily revealing the technical and choreographic complexity which
underpins behind the deceptive simplicity of so much of Morris’s
seemingly natural, ‘human’ movement. But ultimately this is a
company piece, the group extended to 24 dancers; it is not surprising therefore
that it is in the choral scenes where Morris’s invention and confidence
is most powerfully evident. Most noteworthy are the final scenes in each Part:
in the closing scene, to the celebratory accompaniment of vibrant trumpet
fanfares, the 24 dancers form streams of colour, streaking and darting across
the stage, conjuring startling pace, energy and joie de vivre —
‘These delights if thou canst give/ Mirth with thee I mean to
live’. 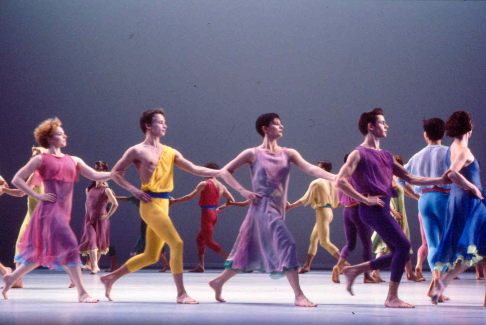 The four singers, sopranos Sarah-Jane Brandon and Elizabeth Watts, tenor
Mark Padmore and bass Andrew Foster-Williams, all projected the narrative
superbly, blending convincingly with the stage drama, enhancing and receding as
appropriate. Foster-Williams, in particular, delivered his airs with buoyancy
and brightness. Jane Glover skilfully conducted the alert, energised members of
the English National Opera Orchestra, bringing freshness and translucence to
Handel’s score; the woodwind were especially impressive, exquisitely
evoking the pastoral milieu, as when first a lark, and then a whole flock of
birds, intricately twist and tumble in fantastic flight, their aspiring arcs
symbolised by a scintillating soaring soprano. The New London Chorus were crisp
and clear throughout.

The ‘imperfect, labouring’ bodies noted by Joan Acocella in her
1994 critical biography – and which once exemplified Morris’ preference
for dancers who whose physicality captured the mortality and genuine
‘flesh-and-blood’ of the human form — were no longer so
dominant, replaced by a sweet litheness of form and truly eloquent tenderness.
Yet, Morris’s pastoral vision is not an ethereal or idealised landscape
but an earthy dominion where the rich diversity of the human spirit is
rejoiced. Capturing all the elements which have characterised Morris’s
career — beauty and realism, levity and gravity, formal rigour and quirky
invention — it remains utterly captivating and uplifting. It is, in the words
of Milton himself, ‘linckËd sweetnes long drawn out.
(L’Allegro)

All photos by Ken Friedman