Idomeneo is a natural product of the courtly world of the
Enlightenment — its hierarchies, values and symbols. It should be
perfectly possible to translate this tale of vengeful Gods, proud Kings, of the
passage from youth to age, and of human sacrifice, to a contemporary setting.
Indeed, myth is essentially a presentation of a social worldview which, by
delineating the customs and ideals of that society, can reveal how the modern
world attained its current form. However, Katie Mitchell’s modern-day
production so disregarded the mythic meaning of the work, and discounted the
characterisation and motivation of the protagonists, focusing instead on
mannered, often manic, stage business, that there was no hope that the audience
might empathise with those on stage or relate to the unfolding drama.

The photographic seascape front-drop looked promising. It rose to reveal a
clinical latter-day conference centre, the cool beiges and slate greys
suggesting the best of contemporary Scandinavian design rather than of sultry
climes of Mediterranean Crete. A panoramic window offered a glimpse of a cool,
aquamarine ocean, but that’s as close as we got to Poseidon’s
stormy seas in this production.

Vicki Mortimer and Alex Eales, Mitchell’s frequent collaborators, may
have created a crisp, serene set, but it was immediately transformed into a
hot-bed of activity, as waiters, bureaucrats and assorted flunkies charged back
and forth, to and fro, in an unexplained and unfathomable flurry of activity.
Pity poor Sarah Tynan, who as Ilia is charged with responsibility for
clarifying the dramatic situation and mythic context in her opening aria,
‘Padre, germani, addio!’; it was almost impossible to concentrate
on her music, words or predicament, so distracting was the surrounding
maelstrom — despite Tynan’s serene composure, tender lyricism and
excellent diction.

This infuriating fussiness, and the intrusion of countless pen-pushers and
attendants, continued throughout the first two Acts, undermining the mythic
stature of the work. Thus, while Idamante, seated at the distant end of a
twenty-foot dining table, proclaimed his love for Ilia and begged her not to
condemn him for the actions of his father (‘Non ho colpa’), Ilia
gobbled down her dinner as sommeliers bustled about her, topping up her wine.
No wonder she didn’t take him seriously. Iadamante fared little better in
his endeavours to woo her in Act 2, as smooching couples intruded on their
private moment, swaying distractingly to his words of love.

Mozart’s music sharply delineates the four main characters.
Ironically, while over-directing her army of extras, Mitchell left the
principals pretty much to their own devices, with mixed results. The
composer’s verdict on the original Idomeneo and Idamante (the aging Anton
Raaff and the soprano-castrato, Vincenzo dal Prato) was that they were,
“the most wretched actors ever to walk the stage”; Mitchell did
little to help her actors rise above these lowly standards. While Paul Nilon as
Idomeneo was imposing and credible, Robert Murray‘s Idamante was a pretty
feeble hero, threatening to slip ineffectually into self-pitying alcoholism. In
Act 1 Scene 2, seeking solitude at the base of a cliff, to mourn the supposed
loss of his father, Idamante sat unmoving on a craggy boulder, solipsistically
bewailing his grief and pain, and failed to recognise the returning king even
when he was staring him in the face; the general lack of dramatic credulity
made the usual suspension of disbelief even more difficult.

Only Emma Bell, as Electra, injected any real dramatic frisson;
unfortunately she was played, admittedly with great panache, as an obsessive
neurotic, compulsively stalking the hapless Idamante, cocktail glass clutched
firmly in hand — think ‘Sex and the City’ meets the Ugly
Sisters. Her Act 2 aria, ‘Idol mil’, where she professes her
sincere belief that she might win Idamante’s heart once she has removed
him from Ilia’s gaze, was beautifully rhapsodic, a lyric moment of
illusory happiness evoking real human emotion and pathos. Mozart’s music
provides a moment of genuine compassion, fleetingly humanising Electra. But,
Mitchell sees things rather differently: Bell’s hopeful, rapturous arcs
became orgasmic swoons, as a civil servant indulged her foot fetishism.
Electra’s jealousy should inspire fear, dismay and pity; but here Bell
simply became a figure of fun, slumping drunkenly on the sofa, fawning across
the indifferent men, her avowals of happiness presented as the deluded idiocies
of a drunken clown. 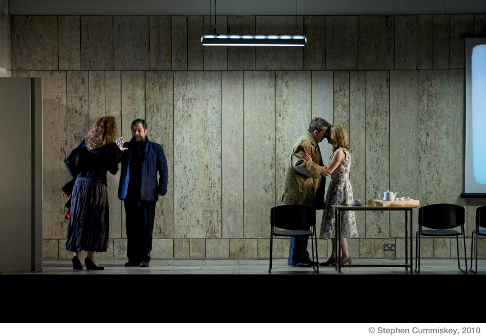 The chorus fared little better. For most of the opera they stood stock
still, seemingly bemused as to their role in the drama. They were also
musically sluggish and leaden in the opening chorus, ‘Godiam la
pace’, although they sharpened up considerably as the opera progressed,
and there was some admirable singing from those given small solo roles —
Claire Mitcher, Lydia Marchione, Michelle Daly, David Newman and Michael Selby.
And, there was one neat visual touch, in Act 2, as the vicious storm breaks
before the departure of Idamante and Elektra: rushing from the smart cruise
boat departure lounge into the VIP area, to escape from the ensuing tempest
(‘Corriamo, fuggiamo’), the huddled crowd presented a fitting
visual metaphor for the dread which overcomes them.

Despite the nonsense on stage, there was some excellent singing, not least
from Paul Nilon. He rose impressively to the challenges of the Act 2
‘Fuor del mar’, when it dawns on Idomeneo that all of them will be
victims of the gods. His coloratura was notable for its stamina and
flexibility, both agile and imposing. Sarah Tynan both looked and sang
beautifully — costumed in an array of gorgeous gowns by Vicki Mortimer.
Particularly striking was her clarity and superb intonation in ‘Se il
padre perdei’, as Ilia confesses to Idamante that she now considers Crete
a kind of homeland. Emma Bell was fittingly psychological unhinged in
‘D’Oreste, d’Ajace’, while retaining absolute vocal
control and displaying great power and projection. In the original version of
1781, Idamante was a castrato role, but Mozart gave a tenor alternative five
years later in Vienna when it was being performed by amateurs. Today the role
is often taken by a mezzo soprano, and Robert Murray failed to convince that
the tenor version is to be preferred, seeming strained and tight at the top of
the register.

The minor roles performed consistently. In particular, Adam Green’s
Arbace, reporting that the people are demanding that the king deliver them from
the monster, presented a touching lament for a Crete that is overwhelmed with
sadness in his Act 3 aria ‘Sventurata Sidon!’

Edward Gardner, despite a rather weighty start in the overture, elsewhere
sensitively drew out the instrumental nuances of the detailed, at times very
virtuosic, orchestral score. There was some exquisite woodwind playing in Act
2, reaching its height in the quartet for flute, oboe, bassoon and which
accompanies Ilia’s ‘Se il padre perdei’. Generally, despite
the stasis on stage, Gardner paced the drama with increasing assurance; this is
an opera with few of the long pauses between arias so characteristic of
opera seria, and it was thanks to the conductor’s sure sense of
the relationships between scenes and effective handling of the transitions and
overlaps between numbers, that some sort of forward dramatic momentum was
suggested.

The final act, as the individual protagonists express their private sorrows,
did however lose musical momentum. And it made little dramatic sense. Mitchell
has dispensed with the Gods and with the sea monster. Thus, there is nothing to
cause the death and destruction of which the High Priest of Poseidon reports
— making his recitative meaningless. And there is nothing for Idamante to
slay, no heroic deed to prompt Ilia to declare her love — only vague
waffling about brave deeds. It was hard to believe that this was a man to lead
the Cretan nation … better perhaps to have stuck with the original
myth’s ending and sacrificed Idamante after all. In the closing moments
there was one last flounce from Elektra: horrified by the general rejoicing and
the prospect of Idamante seeking pleasure and solace in her rival’s arms,
she shrieked, ran from the stage and shot herself in the wings. Few wept, or
cared.

The disappointing lack of concordance between dramatic contrivance and
musical meaning makes this an unrewarding production, one which cannot fully be
redeemed by some fine singing and playing.

All photos by Steve Cummiskey courtesy of English National Opera