It was founded by Leonard Ingrams, who began hosting operas nearly 20 years ago at his home, Garsington Manor in Oxfordshire. Tragically he died, only in his 60’s, in 2005, but the festival continues, moving next year to new surroundings at Wormsley Park, owned by Mark Getty. Ingrams was specially fond of Rossini, so this performance of Rossini’s Armida was a tribute to him, and to his artistic vision.
The Metropolitan Opera in New York did Rossini’s Armida earlier this Spring. This Garsington Armida was completely different, but by no means the lesser experience. At the Met, Armida was a vehicle for RenÈe Fleming, designed to showcase her coloratura talents. At Garsington, the emphasis was on Rossini, and on the dramatic heart of the opera.
The theatre at Garsington is tiny, capacity only 517, smaller than the 1500 seat Real Teatro di San Carlo but this is not necessarily a disadvantage, as Armida is almost more baroque than bel canto. David Parry has conducted no fewer than 7 Rossini operas at Garsington (one planned for next year). He’s currently Artistic Director at Opera Rara, so he’s attuned to period performance. Some of the musicians in this orchestra have been with Garsington since its formal inception.
Parry emphasized the inherent purity of Rossini’s orchestration. It’s carefully structured, clean, built on almost symmetrical foundations, from which extravagant flourishes can take flight. Indeed, images of M C Escher’s drawings came to mind. Escher’s flights of stairs and archways resemble Rossini’s musical architecture. The vocal parts soar, run after run, pushing the scales to ever greater heights.Sudden leaps and decelerations creating a strong sense of movement. Parry kept the lines clear and uncluttered, revealing the clarity of Rossini’s ideas, which seem to reference Handel and Gluck.
The production takes its cue from the musical logic.A well known critic described the Act One set with its row of chrome and leather chairs as “Ikea”, the Swedish design warehouse. And why not? The principle behind Swedish design is a fusion of function and classic elegance, an apt metaphor for Rossini’s style in Armida.
The theatre at Garsington is temporary, but solid enough to withstand inclement weather. Designer Ashley Martin-Davis brings the struts and metal framework into the opera, by simply painting them red and black. It’s an intelligent comment on the action, for this Act takes place in the camp of the Crusaders (also tented, like Garsington, one presumes). 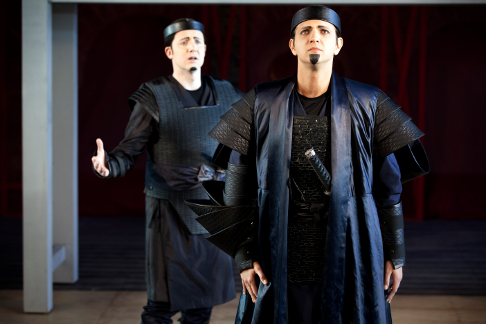 Nicholas Watts as Eustazio and Bogdan Mihai as Goffredo [Photo by Johan Persson courtesy of Garsington Opera]
The Franks (and Italian Rinaldo) belong to a military order with semi-religious vows, but Rossini very deliberately doesn’t identify them with the Knights Templar. Torquato Tasso’s original poem, on which the narrative is based, dates from 1580. but connects to traditions that long predate the Middle Ages. In painting, the protagonists are usually depicted as idealized Greeks or Romans. In any case, Armida is a fantasy, for Armida is a sorceress who can use magic. Audiences in Rossini’s time had no delusions that the opera was “historic”. Indeed, the idea of priests succumbing to temptresses would have been only too obvious, and Rossini couldn’t risk offending the all-powerful Church.
Military orders are highly disciplined, and these paladins have vowed to repress love and earthly pleasures. Martin Duncan has the men move in orderly procession. They troop up parallel flights of stairs — the structured music, the Escher ideas, coming together beautifully. They’re ascetically garbed in black, reinforcing the idea of an austere sect. The costumes, stark as they are, are beautiful — elegant and simplicity again.
Armida is justly famed because it affords glorious coloratura display. But it’s important not to forget the context. Armida and Idraote and Goffredo’s Knights are polar opposites. The opera pivots on the dichotomy between love and duty, pleasure and higher ideals. Indeed, Armida’s singing shines all the more brightly when the context is given due respect. Armida’s luminous gardens wouldn’t be so tempting if they weren’t such a contrast to life in the regiment.
A small, temporary festival like Garsington does not do megastars, so it’s pointless to compare Jessica Pratt’s Armida with RenÈe Fleming or Maria Callas. Instead, she brings youthful energy to the part. If her ornamentations aren’t too flamboyant, she reaches the high peaks in the score, and acts well with her voice. She comes over as a warm hearted spirit, so when Rinaldo leaves her, you sympathize with her pain. In Dove son io? she finds the different stages of emotion. It’s not all piercing frenzy, but gradations of feeling.
Because the balance in this production isn’t entirely one-sided, the male parts take greater prominence. Victor Ryan Robertson sings Rinaldo with pluck. He brought a sense of wonder to his Dove son io!, a deft parallel to Armida’s final aria. The contrast between “hero” Rinaldo who kills for honour and “lover” Rinaldo, conquered by sensuality, was clear.
For such a young singer, Bogdan Mihai’s Goffredo had vocal authority and physical presence. Nice richness to his voice which will serve him well. He doubled as Carlo with David Alegret singing Gernando and Ubaldo. Alegret paced the long Gernando recitatives carefully, so the sudden explosions up the scale at the end of long phrases were very effective. 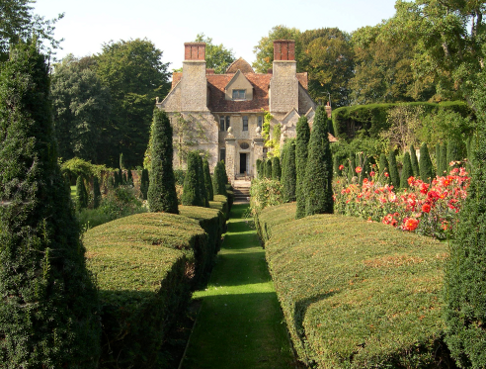 The Knot Garden [Photo courtesy of Garsington Opera]
Christophorus Stamboglis singing Idraote and Astarotte was impressive too. His voice has character, so it was almost a pity the parts weren’t large enough to show his full measure. Nicholas Watts sang a nice Eustazio.
Naturally, or rather supernaturally, Armida’s gardens in Acts 2 and 3 were vividly coloured. Now the male chorus appeared as blue-painted demons, hiding behind the infrastructure of beams that evoked both forest and ocean. When the nymphs appeared the audience gasped in delight. They were stunning, pale pink top to toe with glittery skirts, moving like exotic flowers. The choreography was simple, more group movement than dancing, but it supported the singing, rather than distracting from it. Gradually the male figures emerged from hiding and embraced the nymphs chastely. The choruses re-enacted Rinaldo and Armida’s relationship. It was another sign that this production developed from an understanding of the music and the opera.
Those who know the gardens at Garsington will be familiar with the strangely twisted topiary trees in the parterre garden the theatre opens onto. As we filtered out after the performance, the garden was lit with emerald light, the more famous large shrubs picked out in mauve. It was unearthly, as though we were experiencing Armida’s garden for ourselves. Imagine Garsington staging Tannh‰user ! That is part of the magic that is Garsington, where stage and reality interact.
This production, though, could easily be transported to another theatre. Indeed, any theatre suited to chamber opera. It’s much too good to be missed. Perhaps Garsington might consider joint ventures? In the long term that might be a way forward.
Anne Ozorio
Performances run from 5th to 29th June 2010. For more details, please see www.garsingtonopera.org