She was in Paris to appear in one of her signature roles—Semele,
Ovid’s overambitious nymph who pursues immortality but finds
death—in ThÈ‚tre des Champs-…lysÈes revival of David McVicar’s 2004
production of H‰ndel’s eponymous oratorio-opera.

I am not sure I would want to hear the whole performance again on tape, if
one exists. Certainly I have no desire to seek out the obscure recording of the
role de Niese made early in her career (Arion PV704021/22, deleted). Yet in the
house, watching as well as listening, it made for a memorable evening. The
Paris audience agreed, responding with a quarter hour of unrestrained cheers
and rhythmic applause. 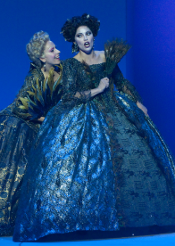 My ambivalence stems from the fact that de Niese, as many have noted, is not
a singer’s singer. At the top her voice turns metallic, runs and
registers are not perfectly even, and slightly strained vocal production
precludes a genuine piano or legato. Though she has the notes, manages
coloratura adequately, and possesses a distinctive smoky timbre in the middle
of her voice, the overall impression can be monochromatic. From a purely
musical perspective, de Niese cannot offer the listener the spell-binding
moments conjured up by the very greatest exponents of the Baroque and classic
repertoire.

Yet de Niese makes 150% of what remains. If she lacks the nightingale
delicacy and elegant ornamentation most others deploy in H‰ndel, she supplants
it with earthy exuberance and youthful energy. Her beauty and disarmingly
naturalistic style of acting—more like TV than opera—convey a
modern type of dramatic conviction. With Semele, the result is a
musical-dramatic portrait of a flesh-and-blood creature: a spoiled adolescent,
pouting, panting and protesting by turns. None of this is subtle, musically or
dramatically, yet it is a perfect match of singer and role. De Niese shines
particularly brightly in dramatic confrontations, such as the coloratura
quarrel with Jupiter that seals her doom (“No, no, I’ll take no
less”), her eyes flashing as she spits out the runs—a moment that
normally seems anemic. She is similarly at home exploiting her sex appeal, more
as actress than singer, as when she seduces Jupiter by running her foot along
his crotch. (Amazing what tenors get to do, these days!) 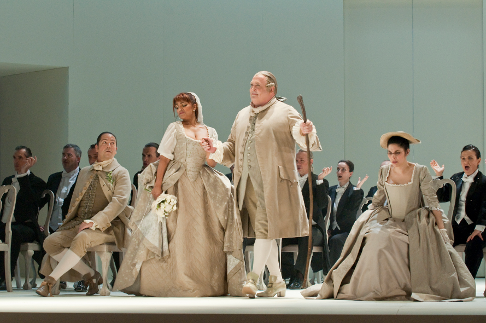 For those who favor purely musical values, de Niese’s colleagues
offered greater rewards. Foremost among them was Peter Rose. Though surely
among the most versitile of modern basses—in the past two months, he has
sung Osmin in M¸nchen, Ochs in Barcelona, Gurnemanz in Tokyo, and Falstaff in
Seattle—Rose is hardly known as a Baroque specialist. Yet his
Cadmus/Somnus was stylish and sonorous, underpinned by rock-solid lower
register. At the end of Somnus’s “Leave me, loathsome light,”
he interpolated down an octave to a long B1 (at Baroque pitch that’s
almost a low b-flat). Resounding through the large theater like an organ pedal,
it was one of the most astonishing notes I have heard in decades. Such vocal
details were consistently accompanied by clear diction, convincing
characterization, and sensitive phrasing.

The young Maltese-born, London-trained soprano Clair Debono made a limpid
Cupid, singing in a “correct” Baroque performance-practice style
that contrasted with the other principals, delivered with great sensitivity.
Debono, who’s been appearing under William Christie and Emmanuelle HaÔm,
dispatched the Act I aria, “Endless Love” (actually written for
Semele) to great effect. McVicar had her wander the stage in red 18th century
garb, a black cane, and pair of John Lennon-style sunglasses—a striking
allusion to Cupid’s blindness.

Alaskan mezzo Vivica Genaux assumed the double-role of Semele’s dull
sister Ino and the imperious goddess Juno, differentiating the two splendidly.
She offered much of the stylistic subtlety that De Niese lacked, even if her
voice is not the plushest. American tenor Richard Croft, a veteran from the
2004 who has recorded the role on the recent Curnyn/Grange recording, assumed
the demanding tenor part of the philandering Jupiter. Every note was in place,
though the voice seemed to lack the extra sheen I have heard in years past, for
example in “Where’er you walk.” Could this reflect the strain
of preparing the Met’s Loge in the fall?

Less satisfying was countertenor Stephen Wallace as Athamas, another 2004
returnee. His voice seems to be fragmenting, with four or five strong notes in
the high-middle, surrounded by weakness and an almost tenorial bottom. French
soprano JaÎl Azzeretti sang beautifully as Iris, like Debono in a more
classically Baroque fashion, but her diction suffered by comparison to an
otherwise Anglophone cast. 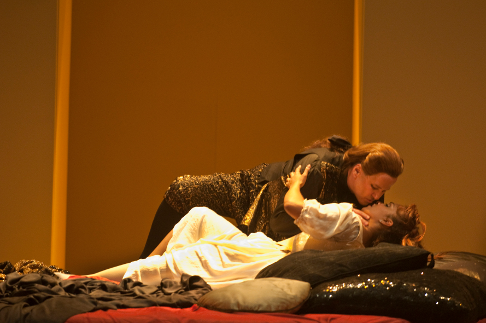 McVicar’s production sets the entire opera in a single elegantly
minimalist hemicylical space. The action is understated, sometimes even ironic,
with only one coup de thÈ‚tre: the moment when Jupiter removes his
regal protective cloak from Semele’s shoulders and—like Don
Giovanni—she sinks into a smoking floor. Otherwise, McVicar’s
quietly elegant approach focuses the action on inter-personal relations. This
helps translate a chorus-laden and declamatory oratorio into a more complex
opera libretto. Semele becomes story not simply of the title
character’s ambition, but of sibling rivalry. Ino is resentful: She wears
spectacles, for example, symbolizing not only her plainness compared to her
sexy sister, but the fact that that she, in contrast to blind Cupid or
impulsive Semele, sees her true love from the start.

Overall the performance highlights the current state of Baroque opera
performance, which has found new a compromise between the full-voiced dramatic
style of the 1970s Handel revival and the purity of the 1980s and 1990s heyday
of “authentic” practice. While harpsichordist cum conductor
Christophe Rousset is steeped in the latter aesthetic, and continues to do much
to uncover new and obscure scores, his interpretive ideal in H‰ndel opera
remains Marilyn Horne. Rousset believes—I suspect he’s
right—that H‰ndel would approve of such an overtly dramatic approach, not
least in an overtly witty and bawdy “tragedy” like Semele.
Rousset’s conducting bristled a bit, rather at the expense of
charm—though, to be sure, despite its wonders, H‰ndel’s score lacks
the orchestral range of Monteverdi or Mozart—but Les Talens Lyriques and
the Choeur du ThÈ‚tre des Champs-…lysÈes followed with admirable virtuosity.
Overall, the success of this hybrid H‰ndel evening is a tribute to the
leadership of Dominique Meyer, who promoted much Baroque opera at
Champs-…lysÈes and with these performances leaves Paris to head the Wiener
Staatsoper.

All photos by Alvaro Yanez