The greatest of his more than sixty stage works were performed in all the major
musical centres of Europe and dozens of his arias were the mainstay repertoire
of the leading singers of the day. Celebrated above all for his melodic gift
and the supreme elegance of his vocal writing, Hasse was held by the
contemporary English music critic and historian Charles Burney to be
‘superior to all other lyric composers’. One measure of
Hasse’s popularity was the enormous salary he received as court opera
composer in Dresden; together with his wife, the famous prima donna
Faustina Bordoni, Hasse earned the staggering sum of six thousand Reichsthaler
annually — sixty times the amount paid to Johann Sebastian Bach for his
services as Thomaskantor in Leipzig. 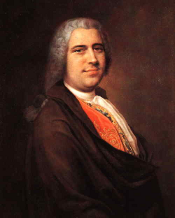 Called ‘il divino Sassone’ by his Italian admirers, Hasse was in
fact not a Saxon but a native of North Germany. Born in the village of
Bergedorf near Hamburg, the composer began his musical career in 1718 as a
tenor at Hamburg’s G‰nsemarkt opera — an important station for many
prominent German opera composers, including H‰ndel, Keiser, Mattheson and
Telemann. After a short engagement the following year at the court in
Braunschweig, Hasse journeyed to Italy, where he settled in Naples and studied
with Porpora and Alessandro Scarlatti. One of Hasse’s first Italian
works, the present serenata Antonio e Cleopatra, was composed in 1725
and was followed by a series of opera commissions for the Neapolitan court. His
fame grew quickly over the next several years, culminating in the success of
Artaserse at Venice during the Carnival season in 1730, the
composer’s first collaboration with Metastasio and the opera which
launched his international career. The following year, Hasse and his new bride
Faustina were engaged in Dresden, where they remained on and off until the
beginning of the Seven Years War in 1756, with sojourns in Venice, Vienna,
Warsaw and Paris. Following the war, which ruined the Saxon court both
financially and artistically, Hasse moved to Vienna in 1764 before retiring to
Venice with Faustina in 1773.

Hasse’s music is historically significant as a perfect embodiment of
the stile galant, which, though it was the principal style for at least half of
the 18th century, has been sadly misunderstood by a music historiography
centred on the supposed dichotomy of ‘baroque’ and
‘classical’. Fixated on the far-from-mainstream J.S.Bach and
Mozart, generations of musicologists have explained away central figures like
Telemann, Hasse, C.P.E.Bach and J.C.Bach as ‘post-baroque’ or
‘pre-classical’. Only since the 1970s have scholars begun to
undertake a serious examination of the style which dominated Europe for
decades.*

In light of the traditional view of the 18th century as the age of Bach and
Mozart, it is not surprising that mid-century opera composers such as Hasse or
Carl Heinrich Graun — who was regarded as the former’s near-equal
by contemporary critics — remained largely forgotten during the so-called
‘early music’ revival in the latter half of the twentieth century.
Another reason their music has remained locked away in the archives is the
inherent difficulty of opera seria itself as a genre. With the notable
exception of H‰ndel, no composer of opera seria has gained acceptance into the
repertoire today, and even H‰ndel’s operas are routinely subjected to
absurd attempts to make the genre ‘understandable’ or
‘relevant’ to modern audiences. Apart from aesthetic
considerations, the sheer difficulty of singing this music represents a further
barrier, as the style simultaneously requires purity of tone, great nuance in
expression and consummate virtuosity. It is not a coincidence that one of
Hasse’s favourite singers was the celebrated castrato Farinelli, whose
appearance in a 1734 performance of Artaserse in London was described
(long after the fact) by Charles Burney: ‘The first note he sung was
taken with such delicacy, swelled by minute degrees to such an amazing volume,
and afterwards diminished in the same manner to a mere point, that it was
applauded for full five minutes. After this he set off with such brilliancy and
rapidity of execution, that it was difficult for the violins of those days to
keep pace with him.’

All of the above-mentioned factors, taken together with the music
industry’s narrow-minded focus on ‘commercially viable’
composers, have meant that Hasse’s music has heretofore been rarely heard
on stage and in recordings. Even the three-hundredth anniversary of his birth
in 1999 did little to change this. It is typical that more of the
composer’s (historically insignificant) instrumental music has been
recorded than have his operas. The only full-length Hasse opera on CD is still
William Christie’s pioneering 1986 recording of Cleofide
(Capriccio 10193/96), with Emma Kirkby reprising the title-role composed for
Faustina Bordoni (very highly recommended if one can find a used copy).

Under the circumstances, any new recording of dramatic music by Hasse is a
welcome addition to the composer’s meagre discography, and is
automatically a must-have for enthusiasts of opera seria. It was
therefore with great expectation that I noted the recent release of the 1725
serenata (Marc’)Antonio e Cleopatra (Dorian Sono Luminus
DSL-92115), a two-act ‘mini opera’ featuring only the two title
characters. Antonio e Cleopatra is interesting not only because it was
one of Hasse’s first significant works, but also since it was composed
for Farinelli himself (Cleopatra), together with the Florentine contralto
Vittoria Tesi (Antonio). While the former is widely regarded to have been one
of the greatest singers of all time, contemporary accounts suggest that
Vittoria Tesi (1700-1775) was at best inconsistent. Although she received many
honours and enjoyed the patronage of Maria Theresia, Metastasio once called her
a ‘grandissima nullit‡’, and Pierre Ange Goudar wrote in 1773 that
Tesi had been ‘perhaps the first actress who recited well while singing
badly’.

That Hasse knew his singers’ abilities well is immediately evident in
the disposition of the eight arias in Antonio e Cleopatra: Farinelli
sings the virtuosic music, while Tesi receives only cantabile arias. In the
lively duets which close each act, Hasse restrains Farinelli’s virtuosity
while increasing his demands on Signora Tesi. These duets also serve to
illustrate one reason why lovers in opera seria were usually both cast as high
voices: the close part-writing and frequent use of parallel thirds and sixths
underscores the intimacy shared by the main characters. Though all of it is
attractive, the best music in Antonio e Cleopatra is to be found in
the cantabile arias, where we most clearly hear the elegant turns of
phrase which made Hasse famous. The arias ‘Fra le pompe peregrine’
and ‘L‡ tra i mirti degl’Elisi’ are superb examples of the
composer’s graceful lyricism: using the simplest of means, he strings
together many small gestures to weave a fine melodic filigree. This is the very
essence of the stile galant.

Unfortunately, the present recording fails to deliver in precisely that
element which is so essential to opera seria: excellent singing. The
two soloists, Ava Pine (Cleopatra) and Jamie Barton (Antonio), are inadequate
to the task. They do not display the most rudimentary grasp of the subtleties
required by the stile galant, and their conservatory-trained
‘operatic’ voices, plagued by incessant vibrato and a
portamento approach to the higher octaves, are entirely unsuitable to
this music. Take for example the wonderful aria ‘Pur ch’io possa a
te’ (Antonio): the ritornello begins with great promise, but
then Ms Barton spoils the effect by plodding through the notes one-by-one
without the slightest sense that she is singing 18th-century music. We cannot
wait for the aria to end — what a shame! As sung by Ms Pine,
Farinelli’s arias hardly fare any better. In the bravura ‘A Dio
trono, impero a Dio’ (Cleopatra), for example, the soprano negotiates the
coloratura passages reasonably well, but her voice is overtaxed by the
highest notes and her indiscriminately-applied vibrato is sometimes wider than
the intervals being sung.

The orchestra, Ars Lyrica Houston, turns in more skilful performances than
the vocalists. Its director, prize-winning harpsichordist and organist Matthew
Dirst, has a good grasp of the style, and the playing is competent, if not
outstanding. Dirst’s decision to include flutes, recorders and oboes to
double the strings is both historically defensible and aesthetically
appropriate. That a period-instrument ensemble from Texas should undertake to
record Hasse is in itself notable and praiseworthy.

Antonio e Cleopatra has been nominated for a Grammy Award in the
category ‘Best Opera Recording’. Given its flaws, ‘Most
Important Opera Recording’ might be more appropriate. Nevertheless, the
nomination is significant because it shows that perhaps Hasse could indeed
become a ‘commercially viable’ composer. Perhaps a singer of
Philippe Jaroussky’s calibre can be persuaded to take up Hasse’s
cause as he has done recently for Johann Christian Bach (‘La Dolce
Fiamma’ on Virgin Classics).

Despite its shortcomings, this recording is recommendable for the simple
fact that we will probably not hear another version of this splendid music. If
one can hear past the vocal performances, the beauty of Hasse’s music
cannot fail to captivate listeners today as it did nearly three centuries
ago.

* Highly recommended is
Daniel Heartz’s Music in European Capitals: The Galant Style,
1720-1780 (Norton, 2003) , which culminates the author’s longstanding
crusade to rehabilitate the music of this period.