At this season’s production of The Tales of Hoffmann by Florida Grand Opera, she takes on a tour-de-force portrayal of all four of Hoffmann’s loves. She spoke with Sarah Luebke.

SL: Offenbach intended that the same singer play the four female roles, for
Olympia, Giulietta and Antonia are three facets of Stella, Hoffmann’s
unreachable love. However, most houses use separate sopranos, a coloratura for
Olympia, a lyric for Antonia, and a dramatic soprano or mezzo for Giulietta.
What was the impetus for you to essay the music of all four Heroines?

EF: I was asked to do the roles once before in the past, about seven or eight
years ago, but had questions about the stamina aspects of getting through it
all. After I had done several performances of Traviata along with
bigger, more dramatic roles, I felt ready to sustain singing for the whole role
[in Hoffmann].

SL: With your voice classified as a fuller lyric coloratura soprano,
what have you found to be challenging vocally executing these roles in one
performance?

EF: It actually works really well. I have found in rehearsals that climbing
down from heights of Olympia to middle tessitura of Antonia can be
tricky. Between Olmypia and Antonia, during intermission, I need to allow my
voice and my mindset to settle, relaxing breath and body and throat, and
allowing the middle voice to come in easily without pressing. Guilietta is a
little lower, but not out of reach. She is more episodic, with recitative-like
passages, which is very different from the aria and trio of Antonia.

SL: Italian Bel Canto and Verismo opera seem to be your
go-to styles as of late. How has the shift to Offenbach’s style and the
French aesthetic changed the way you approach your musical and dramatic
preparation?

EF: I think [Hoffmann] falls into the world of the lyrical, romantic
style with a comedic edge. I have always loved singing in French; something to
do with the language helps with a natural vocal placement for healthy
production. The coloratura of Olympia is akin to LakemÈ’s
“Bell Song” with lots of fireworks, but it starts with a healthy
sense of humor, especially in the out of control coda! Antonia is much more
beautiful melodic music. It’s very singable with sweeping French romantic
lines — very fun to sing. 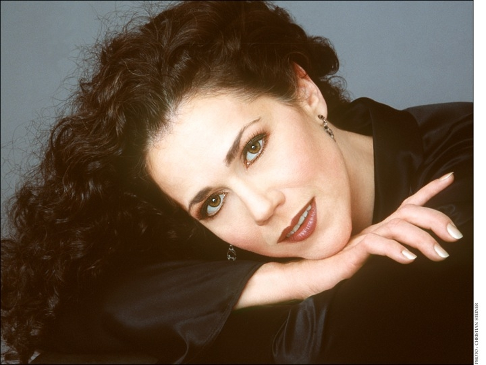 EF: What I couldn’t have predicted with this production was how
difficult the costuming would be. It takes the whole intermission to take paint
off [of Olympia], and completely changing elaborate costumes, for both changes
from Olympia to Antonia and Antonia to Giulietta. I begin getting into costume,
and once I start I never have a moment to sit down; I’m on go the whole
time. It’s been a little crazy and more challenging that trying to sing
the thing! I really like [Florida Grand Opera’s] production. It’s
really fun and entertaining, and moving when it needs to be.

SL: In the beginning of your career in the mid-nineties, your career took off
with your performance of the title role of Lakme with New York City Opera. Many
of those early roles included Lucia, Violetta, Guilda, and Susannah. Will your
success in the Hoffmann Heroines give you the go-ahead to essay more
dramatic or fuller lyric roles?

EF: The natural maturation process of one’s voice leads to some
different things. This role has confirmed that I can do a broader range. Some
things I’m considering that might be more of a stretch include Blanche
[Dialogues des Carmelites], Marguerite [Faust]… also
the bigger Bel Canto roles such as Anna Bolena might work well for me.
It’s fun to think about new possibilities. I’ve always had a great
time learning new roles, and I love the challenge of creating a new character.
I get bored doing the same five roles over and over. This keeps me ticking, and
I’m thrilled that new things are opening up.

SL: You have such an interesting background embracing and premiering a variety
of new operas, including Andre Previn’s A Streetcar Named Desire
and Brief Encounter, Ricky Ian Gordon’s Orpheus and
Euridice and Ernst Krenek’s Die Nachtigall. You have also
appeared opposite Placido Domingo on a 2007 Met Live in HD broadcast of Tan
Dun’s First Emperor. Do you have any upcoming plans for
premiering new works?

EF: I’m learning a new opera by Finnish female composer Kaija Saariaho,
…milie. This is a one women show I’ll be doing at the Spoletto
Festival USA in Charleston, SC. It’s a daunting piece to
learn…it’s all me, 80 minutes, 8 scenes. I’m on stage the
whole time. The music is challenging, and it’s a little challenging to
learn. But I’m just getting cracking at it now in between rehearsals and
performances. This is definitely exciting and a big thing for me.