Bedřich Smetana resolved to create the Czech national opera at a time
when Czech nationhood was subsumed in that of the Austrian Empire, and he chose
a legend about a Czech dynast. Scenes from this opera adorn the walls of the
National Theater in Prague, which was constructed at that time, to this day.
The opera is called Libuše (the name of the prophetess who
founded both Prague and the Czech royal house); it is rarely performed in the
Czech lands and obscure outside them. Instead, to both the Czechs and the rest
of the world, the national opera is Smetana’s light, merry Prodan·
Nevěsta, to the English-speaking world (for it is seldom given in
Czech here) The Bartered Bride. In this guise it has long been in the
category of occasional revivals, the overture almost too familiar (orchestras
love it for the rhythmic workout it gives the strings: it’s a charming
showoff piece). The Met and Juilliard chose it for the first of what one hopes
will become a tradition of collaborations between the Met’s Lindemann
Young Artists and the Juilliard opera program in their nifty little opera
theater, the Peter J. Sharp. The omens look good.

One did wonder, though, at the performance, what Smetana’s charming
folk opera was doing in a Central European cafÈ in doom-laden 1938? Was some
ideological point intended? Or (one sneered) was it just that they
couldn’t afford costumes of the proper era? A program note by director
Stephen Wadsworth cleared things up: No, they couldn’t afford a full
stage of fancy peasant costumes. He gets applause from me for not trying to
make some political point of this, and for clear storytelling though, as usual
with Wadsworth, it’s a bit fussy. Something is always going on,
people are always dancing outside the window when the action should focus on
one character’s solo distress. All the performers were expected to insert
bits of folk-dance into their arias, just to ground us in Czech-ness, which
they did with varying skill—but being able to dance credibly while
they sing is part of the skill-set evidently being taught the Lindemann
Young Artists at the Met. But I still can’t believe parents in Central
Europe in 1938 would dare to arrange a marriage for their daughter without
consulting her any more than they would today.

Opera translations into English come in at least four varieties: Risible,
unendurable, irritating and inaudible. Inaudible—ENO’s Wagner, for
example—is my favorite. Sandy McClatchy’s new version of
Bartered Bride (an opera I have never heard sung in Czech) was mildly
irritating: lots of false rhymes and false accents (the heroine’s name,
at least, should fall with the proper emphasis), but many of those attending
seemed to enjoy it and it was so clearly sung that surtitles should not have
been necessary. The stuttering Vašek got laughs from those who find
disabilities hilarious. (In Smetana’s day, no doubt, that was a larger
group.) 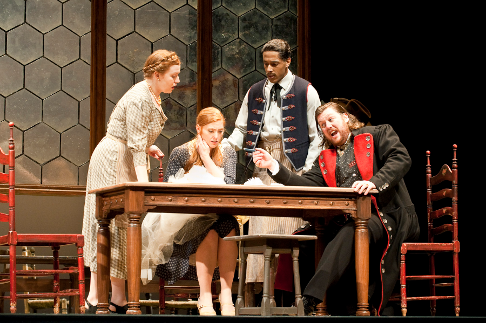 Among the singers, slim, red-haired Layla Claire made the biggest impression
as Mařenka, the bartered bride. She is a talented, affecting actress,
both flirting and sorrowing, and her voice has a Central European sort of
vibrato and a winning, plangent smoothness and rose on occasion to an opulent
high C. Too, she worked her irritations out in dance steps that seemed
unusually well integrated into her character. Paul Appleby, as her JenÌk,
displayed the several colors of his attractive tenor well, though he was
unattractively costumed and obliged to use precious breath dancing with rage.
Alexander Lewis had the part of Vašek, JenÌk’s stuttering
half-brother, and his well-supported light, high tenor made a nice contrast
between the suitors; he also dances winningly and acts ably: a comic
scene-stealer. I see Rossini and Donizetti leading roles in his future. Jordan
Bisch was also an audience favorite in the buffo role of the pompous marriage
broker, Kecal. His perfect diction and command of blowhard nuance (Kecal thinks
he’s smarter than anybody, even when he loses the barter of the title)
were as enduring as his rounded low notes. Noah Baetge’s star turn as the
Ringmaster of a convenient carnival invasion was not vocally impressive, but
that was all right since his part is written to be upstaged by ridiculous
circus acts—the bearded “lady” ballerina and the
contortionist were particular crowd-pleasers. The four annoying parents who
clutter the plot proved their worth when they joined distraught Mařenka
for the quintet that was the evening’s vocal peak. James Levine conducted
the Juilliard Opera Orchestra, and the thrilling, rushing string writing gave
no problems and great delight. 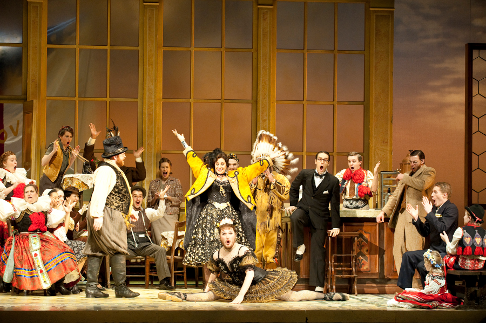 All photos by Nan Melville courtesy of The Julliard School.