It is a mega-show that happily falls into the success column,
despite some excesses and an occasional mis-fire. This commentary is based on
the second performance, July 6, with eye-watering toxic fumes and particulates
still in the air from the forest fires that have been surrounding Santa Fe,
forcing the Opera to hire school gymnasia for rehearsals. If circumstances have
been hard on the singers and production staff, as they surely have, it is
almost miraculous that so complex a show opened on time and in reasonably good
order. 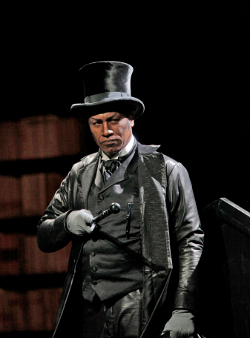 Here is a taste: The cassetta of jewels, directed by the composer
to be left by MÈphistophÈlËs in Marguerite’s garden to impress the
innocent maid as a token of Faust’s affection, was instead a large
Tiffany-esque show window, wheeled in from stage right, loaded with glittering
jewelry and large enough for Marguerite to enter and make her selection; even
her portly duenna, Marthe, wiggled in and grabbed up whatever Marguerite left
behind. When it was time for the soldiers’ chorus, they executed a smart
drill, wearing long greatcoats and spiked helmets that might have betokened the
Franco-Prussian war, and when the bucolic Kermesse (village fair) scene
arrived, it was equipped with a Ferris wheel (history’s first was at the
Chicago World’s Fair 1893), while the merry singing and dancing took
place amidst a carnival midway of gaudy freak shows, with uni-cyclists,
stiltists and roller-skating. In fact, Marguerite makes her entrance upon
roller skates! No, I did not make that up. 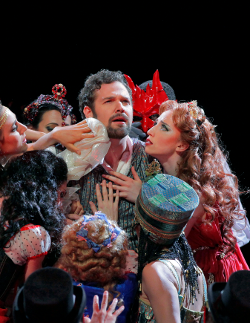 Action was constant, and with much busy detail, and if it was anachronistic,
well never mind! One had to chuckle that Marguerite, as she sang the ballad of
the King of ThulÈ, avidly worked at her humming Singer sewing machine rather
than the traditional spinning wheel. The production continued in such style for
much of the evening. It must have been exhausting and expensive to mount. While
there were small moments that needed tightening or fine-tuning, I expect by the
full repertory run in August all will be well polished to the satisfaction of
those seeking gaudy entertainment, even if the first three acts were combined
into a 90-minute Marathon before the single intermission.

FrÈdÈric Chaslin, the French conductor, pianist and composer, in his second
year as principal conductor at Santa Fe, proved the musical jewel of the
evening. His orchestra was alert, accurate and highly responsive to his
direction. He did linger now and then with a slow tempo, but the waltz scene
and later the rarely played ballet of courtesans, ticked along crisply and with
Èlan. I hope we hear a lot of Chaslin in his native opera repertory. He’s
the real thing! And how very pleasant to hear French opera with a Frenchman in
the pit. Bravo!

Santa Fe has always been a company that seemed to spend more on production
values than on vocal talent, but that alone cannot account for a certain
mediocrity that beset the singing cast, with one exception: Ailyn PÈrez in a
strongly sung musically solid performance of Marguerite, the star of the show.
Her French pronunciation had its Hispanic moments, but the free flow of tone,
her ease in the top soprano register, and her energy and ability to enter into
hyper-action staging won deserved applause. Basso Mark Doss, senior member of
the cast appropriately appearing as MÈphistophÈlËs, was totally into his role,
aided by experience and purpose in his portrayal; vocally, he was underpowered
and was too often unheard over the orchestra. I would have rather heard him as
Leporello in the Mozart opera. 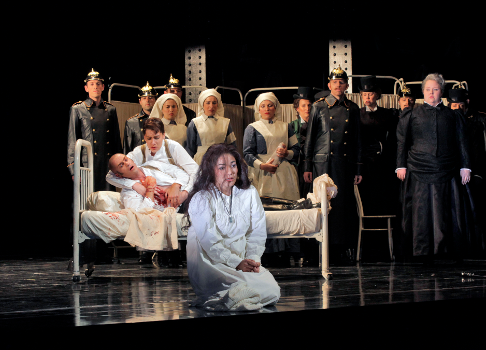 Tenor Mark Hymel had the high-lying phrases for his demanding title role and
gave pleasure with his well achieved high tones, even if his bright tenor was a
bit lacking in body and seemed nonexistent in the lower register. Few tenors
today are reliable in this classic tenor role once graced by the likes of Jean
de Reszke and Jussi Bjoerling (they don’t make ‘em like that any
more). A young lyric baritone, Matthew Worth, qualified as a French bariton
martin, with a pleasant light voice suited to such as PellÈas or
Massenet’s Juggler, Jean. Worth was not equipped with the kind of burly
vocal weight needed to make Valentine credible. He played the part well and was touching in his scenes with Marguerite.

In smaller but important roles, Jennifer Holloway was effective as
Marguerite’s teenage suitor Siebel, here given two arias rather than only
the usual Flower Song, while the greedy duenna Marthe was ably presented by
mezzo Jamie Barton, though Faust’s wine-loving friend Wagner, was only
faintly heard as sung by another too-light baritone, Darik Knutsen. The
2200-seat Santa Fe house is a kind host to larger voices that project well
– such are much needed.

The antic stage direction was by the noted Stephen Lawless aided by Belgian
scenic designer Benoit Dugardyn, who made good use of the full stage and whose
work was colorful and pungent, even if it did consist mainly of props. It all
worked! 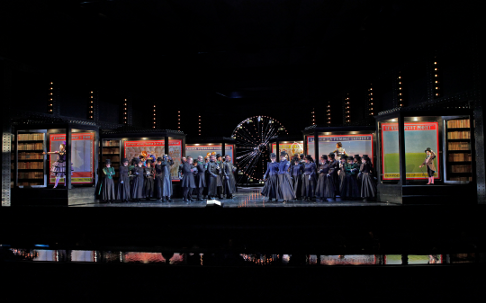 The splendid choral work, lots of it in this show, was directed by the hard-
working and able Susanne Sheston. The mixed-period costume design was by Sue
Wilmington, sometimes a puzzle but often quite attractive. Unusually effective
lighting was well designed by Pat Collins, while the expertly directed
choreography and actor movement was by Nocola Bowie with Lawless. The show as a
whole was visually appealing, if at times the ideas behind it all were a bit
obscure. If unremitting action counts for success, we saw success.

It would not surprise me if stage director Lawless and General Director
Charles MacKay, whether they would admit it or not, were tempted to mount an
all-out rather over-produced rendition of Gounod’s lyric classic in lieu
of really memorable singing. How many in any given audience really know how
Faust was sung in the so-called Golden Age of opera, and how difficult it is in
the 21st Century to find a vocally ideal cast for an opera that was composed
when Rossini and Meyerbeer were still alive? I cannot fault them, for theirs is
the style of the time – the time of regieoper, to use the forbidding
German term, when the intention of the stage director is often preferred to
that of the original composer and librettist. At least Santa Fe’s first
Faust was sung in the original French language (pace St.
Louis); was at one level reasonably entertaining with comic moments;
beautifully played by an expert orchestra and conductor, with a cast that was
of average capability and produced no embarrassing moments. In such terms, the
2011 Faust was a huge improvement over the failings of Santa Fe’s curious
2010 Tales of Hoffman. More French repertory with Maitre Chaslin,
s’il vous plait!