Everything about the Holocaust packs a powerful emotional punch, and rightly
so.

Something insane descended on this world at that time — in
Nazi-occupied lands, in Stalinist Russia, and beyond, that was so catastrophic
that we must never forget. Zofia Posmysz’s original novel was based on
her own experiences at Auschwitz, and Weinberg’s family perished. Posmysz
appears at the end of performances and is deservedly applauded, for she
symbolizes the triumph of good over evil, values we all want to believe in.
This gives The Passenger such potent extra-musical experience that
it’s more a communal homage than an opera.

David Pountney’s production, premiered at Bregenz, is amazing.
Visually it’s so striking that it takes your breath away. This
production, with designs by Johan Engels, costumes by Marie-Jeanne Lecca and
lighting by Fabrice Kebour makes the best possible case for this opera. No-one
can come away unmoved by this set, or by the intelligence of the direction.
This production absolutely makes the case for this opera as theatrical
experience.

Everything’s bleached and pristine, so unnaturally bright it hurts the
eye. Like Lisa Franz herself. Franz was a camp guard in Auschwitz. Lisa and
Walter have been married 15 years but he’s never known about her past.
“But I did nothing bad” she says. Perhaps. However, anyone
connected to Auschwitz was tainted, just by association. Even victims suffer
survivor guilt. Think of Primo Levi.

The revelation was provoked by the sight of another passenger on board ship
who reminds Lisa of Marta, her favoured prisoner. In the original book,
Posmysz wondered what had happened to her own persecutor, who’d
apparently escaped retribution, so it’s an excellent plot device, framing
an account of life in camp. Perhaps this is a key to interpreting the two parts
of the opera. The First Act is more consciously dramatic, while in the Second,
drama is imposed on a “normal” account of a thoroughly abnormal
situation.

Music and text in the First Act are didactic to an extreme, which makes for
good theatre. The orchestration is loud, strident and jarring, whipping up an
excited emotional response. Subtle it is not, though, for the text is
unbelievably stiff. Maybe it’s the English translation, originally by
David Fanning, adapted by David Pountney for this performing edition. Perhaps
they’re deliberately trying to present the singers as automatons, but
this undermines the very real emotions characters like these might have. In
Lisa’s case this is understandable because the character is in such
denial she’s hardly human. Excellent performance by Michelle Breedt. If
we never get to depths with what makes Lisa what she is, it’s not
through any lapse in Breedt’s performance. It’s the script.
Lisa’s husband, Walter, for example, reacts to her revelation in
stylized clichÈs. Even the sturdy Kim Begley can’t make Walter feel real.
Walter’s not evil. He, too, has been betrayed by the big lie, and
deserves more sympathy.

Unfortunately, characterizations in the Second Act are equally cardboard.
This is by far the better part of the opera in musical terms, where superficial
but emotive B-movie shock gives way to moments of lovely writing, particularly
in the arias where the women sing of their pasts and express their solidarity
for one another. Excellent playing — evocative basses and deeper strings,
a beautiful flute line. The ENO orchestra, conducted by Richard Armstrong, at
its best. 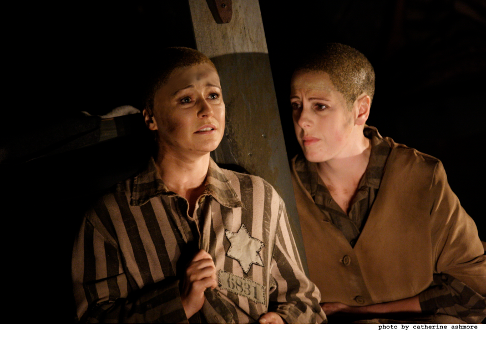 Carolyn Dobbin as Hannah and Giselle Allen as Marta

The script, however, doesn’t reflect the greater subtlety in the
score. Giselle Allen plays Marta with statuesque dignity. Her stage presence
fills the role, but it’s her ability that comes over, rather than the
material she has to work with. Each of the other women are characterized by
nationality rather than much personality, though what they sing is uplifting.
Leigh Melrose.s Tadeusz is strongly sung, but the subplot of love, violin and
mad waltz has more potential than is developed.

There’s a lot of Holocaust-exploitation around, but The
Passenger is most certainly sincere and honourable. The problem may be in
the inherent difficulty of turning subjective experience into slightly more
objective art. Such events are so painful that it’s perfectly human to
need to block the extremes of pain. Good intentions don’t necessarily
lead to great art or depth of perception. Again, remember Primo Levi and the
price he paid for his brilliance.

Another difficulty stems from the circumstances in which the opera was
written. Weinberg was in the Soviet Union, a repressive regime, where political
considerations prevailed over art. The aria about “the freedom of the
steppes” rings hollow when you think of reality. Moreover, there was and
is a long history of anti-semitism in Russia and in Poland. Different solutions
to Hitler, but similar agendas regarding Jews. Obviously not all inmates of
Auschwitz were Jewish, and thousands of Catholic Poles were exterminated too.
They must not be forgotten. But the world associates Auschwitz with the
Holocaust and with Jews, and with death factories. So it’s not easy to
hear lines like “I’m a Jew, we’re meant to die”, even
if it’s in context. No-one is meant to die. There are millions of
individual stories, all important, but the Holocaust was so all-encompassing
that it needs broad perspective. 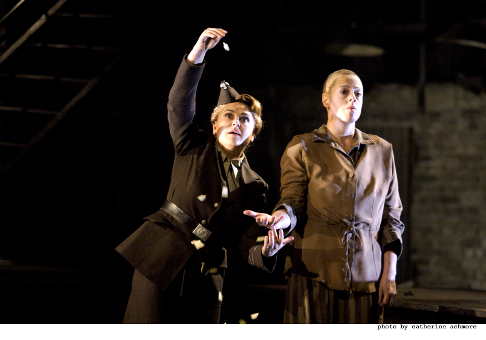 Michelle Breedt as Lisa and Giselle Allen as Marta

Since this production was based on a new performing edition, there might
have been opportunities to tighten the orchestration and especially the
libretto, by Alexander Medvedev. Even Poutney has said, it was the subject tof
this opera that drew him to Weinberg. What works fine in a novel does not lend
itself to the restraints of opera. The Passenger is Weinberg’s
masterpiece, far more daring than The Portrait, and as such deserves
stringent editing. Weinberg may now be highly fashionable, but he isn’t
Shostakovich. Even As a theatrical and emotive experience, The
Passenger works in this production. But more depth and less breadth would
make it more satisfying as opera.

Incidentally, I kept hearing Peter Grimes (particularly the Sea
Interludes) in this music, so I was delighted afterwards to read David
Nice’s programme notes about the influence of Benjamin Britten. Nice
mentions Peter Grimes in connection with Shostakovich, but perhaps
Weinberg also knew Peter Grimes and what the character meant. Another
reminder that Aldeburgh was not insular and is part of a greater European
tradition.