Judith, Esther, Delilah, Bathsheba, Mary Magdalen,
Saint Cecilia, Saint Agatha and their companions were the favorite heroines of
those stories, inasmuch their feminine charms, and their dangerous influence on
men’s behavior, were often graphically described in the librettos. 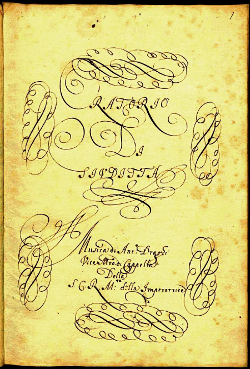 La vedova generosa [The Generous Widow] is the recently identified subtitle
for Giuditta, one among the several dozens oratorios written by the Rimini-born
composer Antonio Draghi (1634/35-1700) for the Habsburg imperial court at
Vienna. One may scent therein a tribute to Draghi’s generous employer,
the empress dowager Eleonora Gonzaga, whose musical household in Vienna was
second only to that of her stepson, the music-avid (and amateur composer)
emperor Leopold I. Both Eleonora and Leopold were devout Roman Catholics, much
Italianate in their taste for music drama. Besides opera proper, they invested
a good amount of their time and financial resources on oratorios, a musical
entertainment originally devised by St. Philip Neri to keep people off the
dangerous enticements of secular theaters, but soon transformed into a
“perfect spiritual melodrama”, as abate Arcangelo Spagna, a
theorist, put it in 1706.

Thus the subject of Judith, the ‘generous’ Jewish widow who
delivered her people from the Assyrian chieftain Holofernes by means of
unorthodox sexual warfare, could not escape Eleonora’s attention, nor the
one of an ambitious court composer. Just months after the premiere performance,
which arguably took place some time between Lent 1668 and Lent 1669, Draghi was
promoted from the Empress’ to the Emperor’s service, with a
substantial raise in his salary. 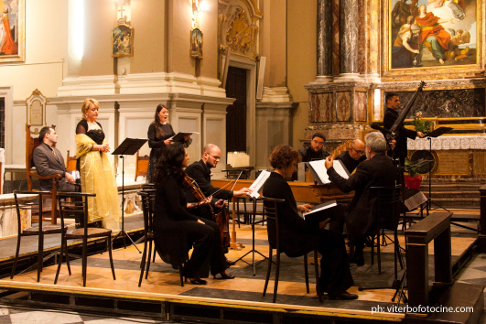 So much for the historic background. As to the music itself, Draghi’s
Giuditta stands mid-way between the earlier, Cavalli-style, Venetian opera and
the progressive Neapolitan school launched by Alessandro Scarlatti during the
following decade. The prevailing syllabic recitative is largely peppered with
elaborate florid passages, and most cadenzas soar to eloquent ariosos in triple
time, sometimes with a dance-like lilt. Although just two numbers are formally
labeled “aria” in the manuscript score, there are actually a few
more. While only the final ensemble for the four soloists (Judith, her maid
Abra, Holofernes and the Narrator) brings the caption “da capo”,
two arias for Abra – somewhat of a comic character – are clearly set in the the
‘modern’ ternary form A-B-A`, a daring experiment for the times.
However, the centerpiece is a long and articulate conversation scene between
Holofernes and Judith, totalling nearly one fourth of the entire work.
It’s a red-hot skirmish between the lusty chieftain and his would-be
victim; the former voicing his desire enhanced by heavy drunkennes, the latter
pretending to reciprocate but determined to cut his head as soon as he falls
asleep.

Every manner of compositional devices are employed here, from secco
recitative, through arioso, to outright aria (particularly compelling is
“In dolce calma” for Holofernes, accompanied by a pair of gambas).
Minutes before accomplishing her brave deed, Judith fulfills the dearest
expectation of any early opera-goer: a lament on a descending chromatic
tetrachord, the time-honored emblem for grief and supplication (“Piet‡
Signor”).

Such a precious rediscovery was presented in Draghi’s native city as a
special project within the 62.nd installment of the Sagra Musicale
Malatestiana, a major festival series attracting visitors from several
countries. For the third year in a row, Italian and Austrian institutions
joined forces to celebrate Draghi, hitherto an injustly neglected composer of
the Baroque era. Contrary to the current fade for oratorios, the Rome-based
Ensemble Seicentonovecento led by Flavio Colusso didn’t arrange a fully
staged production. The venue, a large 18th-century Jesuit church in downtown
Rimini, offered visual attractions enough. No props, very few movements from
the singers, and passages from period sermons delivered by actress Silvia De
Palma shaped the performance as close as possible to the original conditions:
half private entertainment, albeit in fashionable court circles, and half act
of religious worship. Of course, most credit for the success goes to the music
department. A scanty yet energetic ensemble of two violins, theorbo, organ and
harpsichord accompanied a quartet of vocal soloists conversant both with the
dramatic subtleties of recitar cantando and the virtuosic coloratura of late
17th-century bel canto. Two recognized specialists as sopranos Gemma
Bertagnolli (Giuditta) and Elena Cecchi Fedi (Abra) were complemented by the
up-and-coming bass Luigi De Donato (Oloferne) and by the male alto Antonio
Giovannini, a beginner who seems poised for great things.

Robert Wilson’s fans use to maintain that he deepens and actualizes
the dramaturgy of those operas he happens to stage. In my opinion, either is
hardly true, as the Texan director’s strategy apparently aims at sucking
the life out of any particular opera, freezing down its dramaturgy deep below
the zero point in the pursue of such ritual impassiveness as it was probably
the case with the original Greek tragedy – and still is with the Byzantine
church liturgy, the Japanese NÙ, India’s Katakhali or Stockhausen’s
Licht cycle. To be sure, all these theatrical or quasi-theatrical genres are
indented in a respectable religious vision where issues of style, symbols and
formality are paramount, but actualization is obviously ruled out, while
deepths of emotion (if any) are the individual elaboration of their devout
attenders. Whether about Parsifal or Aida, Gluck’s French OrphÈe or his
Monteverdi forerunner Orfeo, each of Wilson’s productions closely
resembles but Wilson, just as any Mass resembles another Mass, leaving aside
such local details as the language of the sung texts and the music accompanying
them.

The present Ritorno di Ulisse – being the middle panel of a
Monteverdi/Wilson trilogy scheduled by La Scala in co-production with the Paris
OpÈra between 2009 and 2013 – sticks to the trend: neither reconstruction nor
deconstruction of the Classic, rather an embalming of it as in a classy funeral
parlour. In the Prologue, the curtain rises on a backdrop mirroring
Poussin’s Le Printemps, an Arcadian landscape inhabited by cute
Disney-esque animals and mimes embodying Love, Fortune, Time and Human Frailty;
too bad that the corresponding singers are plunged in the pit to the
disadvantage of audibility. The core action revolves within hollow spaces
‘representing’ the sea or the Olympus, while the royal palace at
Ithaca, where Penelope is detained in self-imprisonment, is aptly surrounded
with menacing black slates. 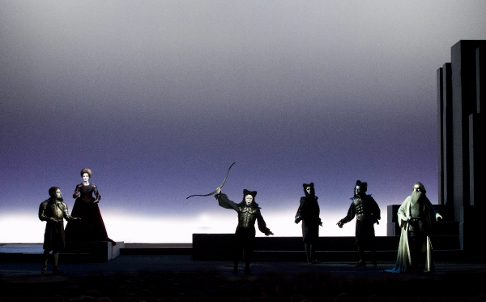 Deities and human beings, the powerful and the destitutes, the goodies and
the villains, look equally unimpassioned and hieratic; static figures striking
enigmatic poses with their white-gloved hands and their pale, heavily made-up,
faces. Most of them, enclosed in Baroque parade armours, are donning lofty wigs
or feathered bonnets. A dÈj‡ vu from the court pageants at Paris and Vienna
during the mid 1600s, thus leaving the timeline near the 1640 premiere of the
opera. What else? Colour-coded lighting schemes and sparse but effective props:
Ulysse’s bow, the skeleton of a ship bottom, a Greek idol on a column.

Deaf to the minimal-chic mermaids of Wilson’s staging, Rinaldo
Alessandrini offered a vibrant rendering of the score, despite the many
uncertainties surrounding the actual completness of the unique Vienna
manuscript (the critical edition he lately prepared for B‰renreiter underwent a
few cuts as well as some educated guesses about the instrumental colours). The
continuo players of his Concerto Italiano added authentic flare to a selection
of strings from the Scala pit orchestra. Thus Monteverdi’s explicit
concern for “affetti” (human passions) revived from Wilson’s ritual fridge,
also thanks to a company of all-Italian voices where Sara Mingardo and Furio
Zanasi, both accomplished artists beyond strict specialist boundaries, towered
as Penelope and Ulisse. Luca Dordolo made a graceful Eumete, Marianna Pizzolato
a convincing Ericlea, Leonardo Cortellazzi’s Telemaco soared as the
performance progressed. Among the double-bill cameos, basses Salvo Vitale and
Luigi De Donato displayed remarkable panache. I only wonder what happened to
brave Monica Bacelli, who for one time left aside her favorite breeches roles.
Her Melanto, although allowed to display more acting liveliness than any other
character in the show, betrayed an alarming vocal disarray. Hopefully just an
off night.