The Metropolitan has recently re-released on DVD the 1978 telecast of Pavarotti’s first Cavaradossi at the Metropolitan. The greater testimony to the ongoing fame of this tenor is a separate Decca release, in tandem with the Metropolitan Opera, called “Bravo Pavarotti.” Only a singer who has reached a very rare level of popularity gets the distinction (if that’s the word) of an entire DVD devoted to clips of aria performances from various telecasts, with absolutely no other content. Decca and the Metropolitan clearly believe there is a market out there, an audience that wants a disc they can put on whenever they just want to bathe in the warm beautify of Pavarotti’s tone and his joyful stage presence.
The DVD consists of 14 excerpts from Pavarotti’s repertoire at the Metropolitan — entirely Italian: Verdi, Donizetti, Puccini and Leoncavallo, with the interesting addition of his restrained but effective appearance in Mozart’s Idomeneo. The video quality varies, with some of the older clips lacking vibrancy, but Pavarotti’s connection to the audience can be felt at almost every moment. Indeed, part of the length of this relatively short DVD (about 90 minutes) comes from extended shots of the tenor, arms wide, eyes initially closed, basking in the extended ovations he came to expect. Are these performances flawless? Of course not. The high notes of both Che gelida manina and La donna Ë mobile both show his technical skill, as in both cases the note is initially not there for him. Pavarotti adjusts and holds on, where a lesser sing might have cut the note short. 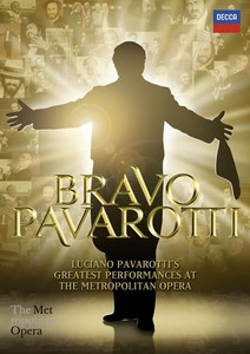 Although not the most convincing actor, these clips do show him as an engaged performer — but then most of these are from his golden middle period, before he began to earn himself a reputation for carelessness and indifference. The close-ups are fascinating, however, for that face, so joyful and alive during the ovations, is a true singer’s mask when vocalizing. Pavarotti’s eyes focus on some distant spot, as he produces his sound and prepares for whatever musical challenge the next phrase may bring. The most illustrative — and amusing — example of this is the Rigoletto quartet, which Pavarotti sings with the Maddelena of Isola Jones, a strikingly beautiful woman with ample — and exposed — cleavage. While singing, Pavarotti is entirely professional, but when he has the chance, he can’t help but very realistically portray the Duke’s leering enjoyment of his evening’s conquest.
So is “Bravo Pavarotti” for anyone but the most diehard Pavarotti fan? Probably not. The brief booklet essay merely runs through some basic information on each performance, and otherwise there is nothing in the package that one couldn’t put together for oneself fairly easily.
That complete 1978 Tosca is a different matter. Conducted with fervor by a very young James Conlon, this Tosca is a handsome example of the Met at its tasteful, traditional best. This is the Tito Gobbi production, and among the three excellent bonus features is a conversation between this performance’s Scarpia, Cornell MacNeil, and Gobbi. We also get a chance to watch James Levine and Conlon try to outdo each other in insightful comments about Puccini’s score. The best of the three is a short rehearsal sequence with Conlon and a pianist leading Shirley Verrett, the Tosca, and Pavarotti through the act three duet. Conlon proves himself to be calm and psychologically astute, as he supports a somewhat needy Verrett and keeps Pavarotti from getting bored.
Pavarotti is in glorious voice throughout (the two big arias are part of the Bravo Pavarotti set), and MacNeil, though late in his career, has the experience and craftsmanship to keep mostly disguised the voice’s tendency to sag in pitch. Verrett, in unappealing light make-up, offers little that is original in her Tosca, but she inhabits the role with grace and passion. Extended passages start to show some stress on her voice (she was known primarily for mezzo repertory), but she has enough of a success to earn a shower of torn program confetti at curtain call.
Tosca was always planned to be the opera Pavarotti would perform in for his final complete performance at the Metropolitan. A year or two before that happened, Pavarotti had to cancel a run. He was replaced in one performance at the last moment by a very young Salvatore Licitra, who earned glowing reviews that suggested he might be the “next Pavarotti.” Alas, Licitra’s career, while substantial, did not support that characterization, and even more sadly, Licitra died this year in an accident. Other singers may come along and be alarmed to find themselves declared “the next Pavarotti,” but everyone knows there will be no such singer. And with Decca holding onto its legacy of recorded Pavarotti performances, we won’t be without the real Pavarotti anyway.
Chris Mullins