Giving seven performances of Donizetti’s Anna Bolena,
in its first Met outing, with internationally glamorous Anna Netrebko followed
by three more (not just one or two!) with a very different singer, rising
bel canto star Angela Meade, a local girl with a large local
following, has been a very happy choice. For one thing, this is a huge role in
a little-known opera; it was insurance for the house to have a cover available,
and any soprano capable of singing it well deserves a few chances to show what
she can do. I’d heard what Netrebko’s version on the air from Vienna last
spring, then by way of the Met web site’s free player on opening night here,
and again by way of the HDTV movie theater showing at the BAMRose cinema in
Brooklyn. On October 24, I attended Meade’s second Bolena in the
house. 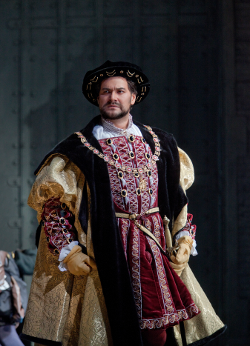 Anna Bolena is perhaps the longest prima donna role in any of
Donizetti’s operas—and Anna may be his longest work, fully four hours of
music if uncut. It was his first hit in Milan (and, later, beyond the Alps),
composed in 1830 after a busy decade in Naples, the capital of a different
country at that time. He was determined to make an impression with a vehicle
for Milan’s reigning singing actress, Giuditta Pasta. The role may lack the
emotional spectrum of Bellini’s Norma, composed for the same singer
a year later, but she had plenty to do: a double aria sortita, three
highly charged duets (with mezzo, tenor and bass), a passionate trio, two
full-scale ensembles, and a famous mad scene that ranges elaborately from
pathos to rage. Canary coloraturas—this is not for you.

Overheard all about me in the crowd at the Met and at BAM: “This is such a
wonderful opera! With such lovely music! Why has the Met never done it
before?” If beautiful music and thrilling vocal drama were all that mattered,
the Met has only scraped the surface of the nineteenth century’s
possibilities, to say nothing of the eighteenth. In part, it’s a matter of
fashion. By the time the Met was built, in 1883, dramatic coloratura vehicles
were largely a thing of the past. Of Donizetti’s dozens of successful serious
operas, only Lucia survived the stylistic change wrought by Verdi and
his successors. Callas brought Anna Bolena back from a century’s
obscurity in 1957, but she didn’t sing it often, bequeathing the La Scala
production to Leyla Gencer. CaballÈ sang it just once, and acknowledged a rare
failure. Sutherland did not tackle it till she was fifty-seven, far too late to
make much of the character. Souliotis recorded it, unevenly as usual, but the
recording has its partisans. Sills was New York’s Anna: she
triumphed in it for a couple of seasons at the City Opera. Krassimira Stoyanova
sang Bolena in a drastically cut concert version with Eve Queler’s
Opera Orchestra of New York, and was spectacular in the raging fioritura of the
“Giudici” scene—the opera came to life for me then as it never had
before. She has not sung it anywhere since, perhaps because she lacks secure
high notes: Anna ranges all over the scale. You might say she sings
her head off. 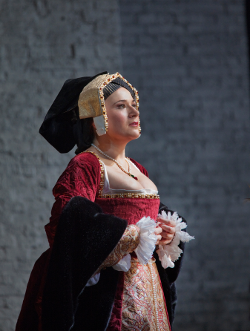 Everyone remembers that Henry VIII wished to be rid of his first wife,
Catherine of Aragon, who had not borne him a son, and that the pope’s
unwillingness to grant an annulment drove Henry, an opponent of Luther’s
Reformation, to renounce papal supremacy. His passion for Anne Boleyn, which
was quite genuine (their love letters have been set to music), was at first
incidental to his wish to marry anyone capable of giving him a male
heir, but Anne, in addition, was part of the clique forwarding Protestant
reform. She was a highly attractive, sharp-tongued, neurotic femme fatale,
capable of inspiring both passion and hatred, and when her sons, like
Catherine’s, did not live (her daughter Elizabeth, of course, did), Henry
turned against her brutally. She was accused of assorted adulteries (high
treason for a queen), and sent to the block, to her great surprise (no one had
beheaded a queen before). That was in 1536. In Italy three centuries later no
one gave a hang about Protestant disputes, and the opera boils down to a
marriage gone bad and the trap laid by a brutal husband to catch his wife
in flagrante duetto. That’s an easy story for any audience to grasp,
as is the prima donna unjustly done to death.

Whether Anna ever really loved Henry and if she still does are questions
never mentioned in the libretto; this deprives her of a necessary dimension of
tragedy (if she did), or exculpates him (if she did not). Perhaps Donizetti
felt he had enough plot to set without facing such a question.

David McVicar’s production is large and dark, as if one look at the
five-story-high stage of the Met overwhelmed any sense of proportion. Getting
the proper atmosphere should not require such “authenticity.” I missed the
light touch Ming Cho Lee brought to the City Opera’s Tudor trilogy: A
tapestry down from the flies, a central playing area, a grand fireplace, an
occasional throne or dungeon chamber, and there we had it: Instant Tudor! At
the Met, Robert Jones’s sets look like the drearier rooms in a manor of the
period—not the ornate court rooms!—and they are two or three times too
high. They are vaguely historical backdrops, but they lack the color of
backdrops. Jenny Tiramani’s costumes, too, may well be in period—I do not
challenge that they are—but surely not everyone wore black and gray at a
brilliant Renaissance court. The chorus, homogenous enough in Donizetti anyway,
becomes a singing wainscot. The hunting forest, too, is gray, and the
triple-arched corridor of the last act is simple to the point of self-effacing.
Only the appearance of the swordsman at the end, Anna’s fate, seems to
attempt a visual coup, and the music ignores him, focused by this point
entirely on Anna. 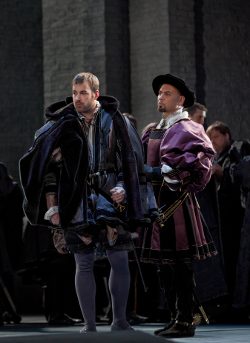 Anna Netrebko has a large and beautiful voice and can be a most affecting
actress, but her voice never seems as at home in Italian music as it did when
she sang Russian roles like Ludmila and Natasha. In bel canto, she suffers from
imperfect agility and a nasal delivery that does not breathe with the music.
The greatest bel canto artists school themselves to breathe in exactly the
phrases the composers wrote, so that the melody, ornamented or not, becomes a
melodious kind of speech, a vernacular poetry. I suspect Russian singers are
trained to breathe differently in their own ancient church-based tradition, and
very few of them escape it when singing western music, however beautiful the
instrument itself. This is my problem with Galina Vishnevskaya’s Puccini,
Dmitri Hvorostovsky’s Verdi and Ekaterina Gubanova’s Donizetti. A few
Russian divas, such as Olga Borodina and Ljuba Petrova, seem to have surmounted
this awkwardness; Netrebko has not. Too, I find her affect too heavy for
Bolena, and on the Opening Night broadcast she was under pitch for much of the
long night. This may be attributed to the strenuous rehearsal process and
first-night jitters: By the HDTV broadcast nearly three weeks later, she was on
pitch throughout, her voice in charge and easily produced. She has always been
a fine actress, and a queen in distress suits her very well. Though I enjoyed
her Vienna broadcasts of Bellini’s Giulietta and Amina very much, as sheer,
lovely sound, my personal preference would be to hear this sensuous instrument
in a more rewarding vehicle, such as Puccini’s Manon Lescaut.
That’s a role that rewards a heavy, beautiful voice, and when did we last
hear such a soprano attempt it? She’d be glorious.

I have heard Angela Meade as Elvira in Verdi’s Ernani,
Rossini’s Semiramide and Bellini’s Norma. The voice is
sizable over an exceptional range, but she wields it prettily, with genuine
trills, a lovely legato and soft but clear singing in the higher ranges that
falls on the ear with special grace. She is a rather stout woman, neither a
beauty nor a natural actress, but as Bolena, who must present her tormented
emotions over nearly four hours, she displayed impressive theatrical skill. In
Act I, she was regal and apprehensive, moving with a dignified posture; after
her accusation and trial, she seemed a much older woman, aged and bent by the
storm. Her madness was distracted and appealing. She did not imitate the
glamorous Netrebko’s highly personal gestures and expressions (the
reminiscent smile, the turn away from the audience for the final note), but
made the role her own within the restrictions of an existing production and
cast. 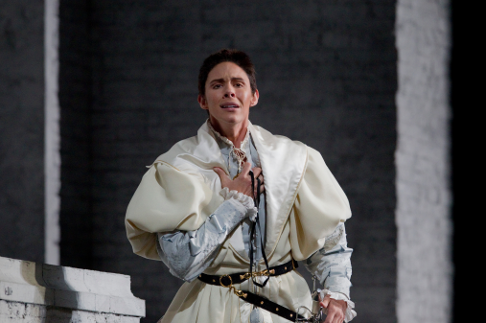 As a singer, Meade takes a while to warm up. In the first act, she seemed
rather to hover over the notes; there was no depth to them, and she seemed
merely to touch the highest notes and drop them. By the lengthy duet with
Stephen Costello’s Percy, however—Donizetti’s Act II, but the last scene
of Act I at the Met, where the opera is given with just one intermission—and
the great “Giudici” ensemble that follows, she had her musical feet on the
floor. Her duet with Ekaterina Gubanova’s Jane Seymour brought the thrilling
days of Sutherland and Horne to mind. As Meade demonstrated in Ernani,
she knows how to preserve her resources through a long night. By the long
concluding scene, she was in her element, tremendously affecting in the sweet
singing of “Al dolce guidami,” and then, with a terrific drop to almost
threatening depths that exploded in the anger of “Coppia iniqua,” her final
denunciation, a dramatic coloratura at last. The soprano who cannot make this
scene her own is not a proper Bolena; Netrebko, too, was fully in charge
here.

Gubanova is a Russian mezzo in the grand tradition of Arkhipova and
Obastzova, but the Met can’t seem to figure out what to do with her—or such
others of the ilk as Diadkova and Smirnova, the latter miscast in Don
Carlo. Gubanova is a superb Berlioz Didon (as she has demonstrated at
Carnegie Hall under Gergiev) and a superb Gluck Clytemnestre (under Muti in
Rome), but she has had some difficulty forcing herself into the molds called
for at the Met. To be fair, she only took on the role of Jane Seymour when
Elina Garanca, who sang it gorgeously in Vienna, pulled out due to pregnancy,
and if her sortita and its ornaments were messy, her duets with King Henry
(desperate) and Anna (poignant) had a happy intensity. Her voice mingles well
with Meade’s. But I wish they’d stage something Russian for her to sink her
palpable artistic teeth into—or Gluck’s Alceste.

Stephen Costello’s once light and liquid tenor is developing grit and
strength. This may forfeit some of his airy elegance, but will position him for
the forceful tenor roles of later Donizetti, Verdi and Puccini, the basic
Italian repertory. He made a handsome, credible figure in the far from credible
role of Lord Percy, Anna’s old boyfriend. Slim Tamara Mumford sang another of
her plummy performances, with a freer command of line up top than usual, in the
trouser role of the importunate minstrel, Smeton. Ildar Abdrazakov was
formidable in the somewhat underwritten (no aria) role of King Henry. His dark
bass must believably threaten each of the other characters in turn or the plot
makes no sense. In the present instance, the quailing of cast and chorus before
him was believable. Shaven-headed Keith Miller, such a treat as Zuniga in
recent Carmens, was impressive as Anna’s hapless brother,
Rochefort.

Marco Armiliato, whose conducting on opening night has been criticized,
certainly did not make the score sound shorter than it is, but he was attentive
to vocal line and Donizetti’s favorite “British” effect, dark strings
underscored by horns, rang out threateningly, gothicly, throughout the
night.

All other photos by Ken Howard/Metropolitan Opera