However, the
wafer-thin text is more than compensated for by the composer’s ravishing
score and reams of gorgeous melody. 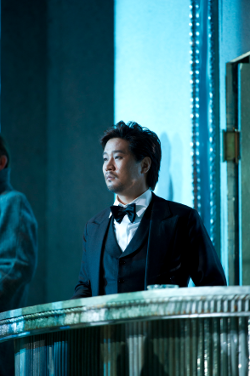 It’s a simple tale and needs a light touch. Sadly, in this revival of
Marco Arturo Marelli’s 2002 production, both the presumptuous direction
and Daniel Oren’s sluggish tempi weigh down the proceedings, and the
result is narcotic.

Not trusting the music itself to provide depth and insight, Marelli has
given the opera a ‘psychological makeover’. Thus, the Swiss village
setting is replaced by an Alpine sanatorium (intended, we are told, to suggest
the world of Thomas Mann’s The Magic Mountain) where Elvino
– no longer a local landlord but a composer – has been undergoing
treatment since the traumatic death of his mother. Bellini’s orphaned
maid, Amina, to whom Elvino is betrothed, is now a waitress at the sanatorium.
So, we have no gentle pastoral woods and byways, rather a sublime
mountain-scape panorama, visible through vast atrium windows; sublime, that is,
until an avalanche crashes through the windows and ruins the grand piano! And
the site of the opera’s only really dramatic event – the narrow
bridge over the rushing mill stream upon which the villager’s witness the
precarious exploits of the sleepwalking, thereby proving her innocence –
is also dispensed with. Instead, Anima has to navigate her way across the
wreckage of the piano. Nineteenth-century village yokels are replaced with
bustling nurses in crisp uniforms and wheelchair-bound patients sporting modern
evening dress. It’s enough to send us all to the asylum. 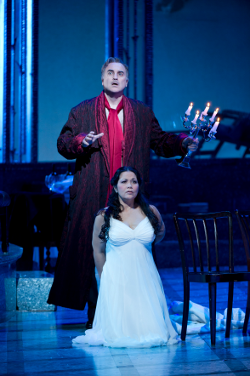 Michele Pertusi as Count Rodolfo and Eglise Gutierrez as Amina

But, bel canto is all about the singing, so perhaps some high-class
performances could rescue this production from insanity and inanity? Sadly, our
Elvino, Spanish tenor Celso Albelo, could not provide the stature and presence
required. While his diction was good and his tone sweet and pure, some
incredible high notes and considerable vocal agility could not compensate for a
total lack of charm. Albelo’s acting was leaden, and he needs to use his
face more expressively to ensure a fully convincing sense of style.

As Amina, Eglise GutiÈrrez demonstrated a beautifully tender
pianissimo, floating, delicate upper notes, and an expressive vibrato.
Crucially, however, her Italian is very poor, and occluded diction destroyed
the inherent line of the melodies whose elegance is so intimately rooted in the
language. GutiÈrrez also adopted an overly fussy approach to the demanding
coloratura. The florid passages stretched her technique to its limits, and she
simply didn’t have the notes, especially in the final aria, in which she
celebrates her lover’s return. GutiÈrrez wasn’t helped by
Marelli’s decision to bring the curtain down at the very moment she
wakes, swap her demure, white nightgown for a plunging, scarlet velvet gown,
and force her to stand on a table to deliver this fiendish number. With soloist
and conductor wildly adrift, it made for an anticlimactic ending.

The rest of the cast were solid. Elena Xanthoudakis did a good job of
conveying Lisa’s bitter jealousy, and mastered the stratospheric
pyrotechnics (though why is she costumed as a lusty barmaid?); and as Count
Rodolfo, Italian bass-baritone Michele Pertusi was appropriately authoritative
and resonant. Elizabeth Sikora sang the role of Teresa, Amina’s foster
mother, most impressively, making much of her powerful interjections. Jihoon
Kim (Alessio), a Jette Parker Young Artist, and Elliot Goldie (Notary), a
member of the ROH chorus, were reliable in their minor roles. 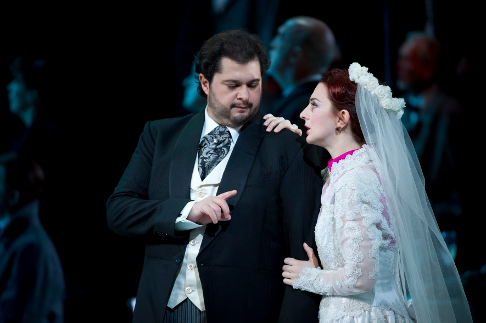 Celso Albelo as Elvino and Elena Xanthoudakis as Lisa

Bellini composed the opera after a holiday in Como, where he admired the
landscape and simple pastoral lifestyles of the inhabitants; the folk music he
heard inspired him to create the beautiful, quite substantial, choruses which
abound in the score. The Royal Opera chorus were a bit ragged, but they did
have to endure Marelli’s silly stage antics; the instrumentalists of the
ROH orchestra fared better, despite Oren’s uninspiring, tentative
guidance.

But, although Marelli’s sweeping scenic designs are pleasing to look
at, the production’s psychobabble is pretty unpalatable.

Photos by Bill Cooper courtesy of The Royal Opera House