Well, almost a new cast. The slave girl Liu of Leah Crocetto was a hold over from the October cast though her performance in these new circumstances seemed more vibrant and vivid. No longer dwarfed by larger than life colleagues, it was far bigger than before and this time it truly mesmerized the opera house — her prayer and supplication, then her suicide came in limpid pianissimi, in rich forti, the youth and freshness of her voice embodied the purity and innocence of maidenhood.
Susan Foster was both the new Turandot and a new Turandot — not the icy, unattainable princess but the vulnerable, neurotic maiden, a Turandot very rarely revealed. Now she was a human scaled, twisted rival of the pure and gentle Liu. To be sure Mme. Foster could not be the icy Turandot if she wanted to. She does not possess the steely, dramatic voice nor the mythic persona to engage in a shouting match with her suitor Calaf. But she does have an engaging dramatic voice with volume aplenty when she needs it, and a personal softness that shone beautifully in her touching revelation that Calaf’s name was in fact “love.” 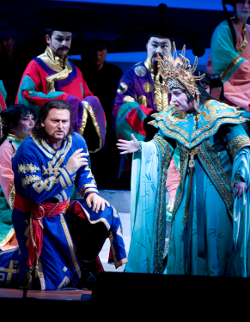 Walter Fraccaro as Calaf and Susan Foster as Turandot
Calaf too, tenor Walter Fraccaro, had a softness and vulnerability that brought a very human dimension to his “Nessun dorma” that beguiled the opera house with its intimacy and earned him one of its all time biggest ovations. His Calaf was a young warrior who was perhaps as neurotic as Turandot, both of them equating love, or let us just say sex — there is that kiss — with death. Mr. Fraccaro did have the heft and volume in secure, supple voice to assault Turandot in his second act answers to her riddles.
Bass Christian Van Horn brought physical stature (he’s tall) and volume to Timur, confidently anchoring the narrative relationships of the opera’s’ protagonists. The Hockney production does not offer this personage opportunity to expand emotionally.
San Francisco Opera Resident Conductor Giuseppi Finzi allowed Puccini’s score to rise naturally from the pit, with tempos that encouraged its huge sonic scope to saturate the War Memorial Opera house. It is a great big opera that gives the San Francisco Opera chorus and orchestra opportunity to strut their stuff as two of the world’s fine ensembles.
The musical flow revealed this young conductor’s understanding of Puccini’s story. He did not sacrifice this newly discovered delicate humanity to dramatic and musical effect — this score’s fatal temptation. But what the young maestro could not do was drive the Alfano duet that ends the opera to the musical coherency that his predecessor Nicola Luisotti miraculously achieved, nor bring point and edge to the machinations of Ping, Pang and Pong. 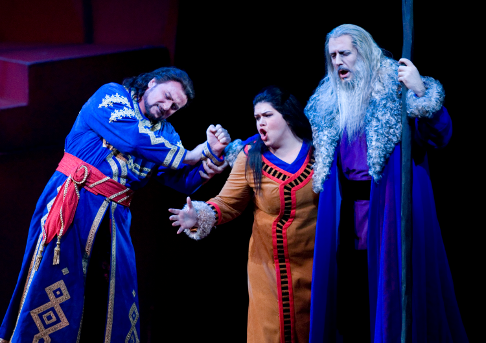 Walter Fraccaro as Calaf, Leah Crocetto as Li˘ and Christian Van Horn as Timur
The Hockney production is saturated with Chinese reds and fantastical shapes that evoke much more than illustrate a sense of Oriental splendor. Hockney thinks two dimensionally, i.e. the proscenium opening is a canvas, thus we are presented with a succession of paintings. This places his characters on the canvas, or rather it freezes them onto the canvas. There is little movement, and virtually no dramatic reality, i.e. characters do not speak to each other — conversations are a visual, public presentation. Puccini’s Turandot offered this formidable visual artist unique opportunity to create a masterpiece.
Michael Milenski