Currently, what was once Gounod’s most popular
opera is now rarely performed at The Metropolitan Opera. With any luck, that is
all about to change. On Tuesday, November 29th, The Met unfurled its first new
production of Faust in quite some time. Despite some nerve wracking
press in regards to the vision of its director, Des McAnuff, this production,
which features a star-studded and extremely talented cast, put a modern face on
a tried and true repertory staple. Despite occasional flaws, I hope to see this
opera presented more often. 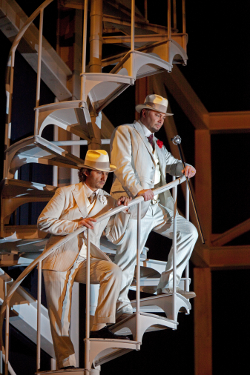 Jonas Kaufmann as Faust and RenÈ Pape as MÈphistophÈlËs

The orchestra was led adroitly by Yanick NÈzet-SÈguin. Given the current
turmoil surrounding the orchestra and the fate of its beloved conductor, James
Levine, it was a joy to see that the ensemble was still capable of performing
with the artistry that Levine has so meticulously instilled in the players.
NÈzet-SÈquin made his debut a few years ago conducting the debut of Richard
Eyre’s production of Carmen. Those performances showcased his
penchant for extracting the quintessentially French qualities of French opera.
It was wonderful to experience his ability to bring out the same qualities in
Faust. His reading was replete with tension, passion, and lyricism; in
short, everything needed to show the brilliance of this opera when performed at
its best.

The stellar cast was headed by Jonas Kaufmann. This tenor, who has made a
name for himself in French, German, and Italian repertoire, is still riding on
the heels of his success in last year’s run of Tosca. The applause
that occurred in the second act of Tosca at his cry of “Victoria,
Victoria”, was an event never before seen at The Met that has reached
something of a fabled status. A similar event occurred during Faust,
after he sang his Act II show piece; he received not only the traditional mix
of bravos and applause, but also hooting and hollering. As someone who has
experienced countless operas, this overwhelming crowd reaction was a first for
me. And it was heartwarming to behold. Needless to say, such a reaction was
warranted in every sense of the word. His rendition of the aria showcased his
adept management of dynamics. In addition, he is the vilest Faust I have ever
had the pleasure of witnessing. For instance, at the end of the fairground
scene, which comprises the first meeting of Faust and Marguerite, he forced
himself into a waltz with Marguerite despite the fact that she had just moments
ago declined his flattery. Such a contrast between Marguerite’s innocence and
Faust’s cruelty elevated the relationship of the two characters to that of
Don Giovanni and Donna Elvira. In the Act III love duet, when faced with
Marguerite’s initial refusal, he forcefully tackled her to the ground.
Needless to say, his strong acting was married perfectly to his masterful
singing. 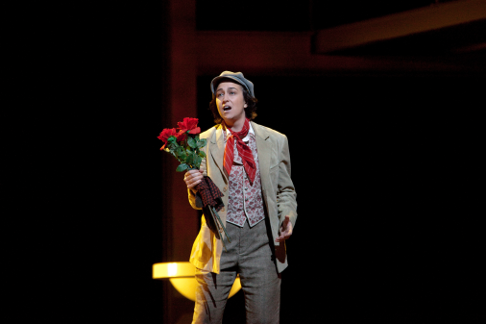 Since her debut as Liu in Turandot, Marina Poplavskaya has created
an impressive list of new Met productions. Now Faust joins Willy
Decker’s Traviata, and Nicholas Hytner’s Don Carlo.
Despite the split press for these two productions, she was ideally suited for
Marguerite. Her rendition was replete with the innocence and naivety of the
character as previously epitomized by Victoria de Los Angeles. However, unlike
the great Diva, Poplavskaya’s Marguerite had the hint of a narcissistic
teenager floating just below the surface. The way she played with her sweater
and her hair during the ballad of the King of Thule suggested that she knew
that men could find her attractive but was trying not to admit this to herself.
Additionally, her capable physical acting came into focus in the second half of
the opera when she was pregnant with Faust’s child.

RenÈ Pape who played Mephistopheles is a consummate performer. His work as
the lead in last year’s production of Boris Godunov was dynamic in
every sense of the word. His performance meshed the evil and comic aspects of
the character beautifully. He was able to give a thrilling performance of “Le
Veau D’Or”, while at the same time doing enacting a tap dance routine
during his serenade to Marguerite.

Other noteworthy performers include Michele Losier whose SiÈbel was
appropriately naÔve. Russell Braun gave a stirring portrayal of Valentin. His
first act aria was intensely the prayer it should be. Also, his dying curse on
Marguerite was all the more heart wrenching because it was obvious that despite
his words, he still loved his sister. As Martha, Wendy White showcased her
comic talents to a marvelous degree. 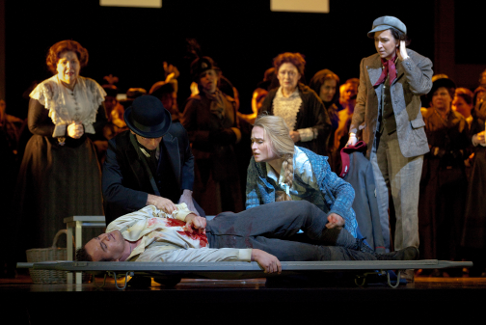 Russel Braun as Valentin and Marina Poplavskaya as Marguerite

This production was directed by Des McAnuff, whose credits include
Jersey Boys as well as the movie Rocky and Bullwinkle. He
desired to set the opera in the post atomic age. The beginning was to take
place shortly after the detonation of the atomic bombs over Hiroshima and
Nagasaki. The production would then go back to Faust’s youth around the time
of World War I and then slowly makes its return to the present. McAnuff’s
goal was to allow Faust to examine where humanity went wrong and why the atomic
bomb was dropped over Japan. This was slightly misguided. While appropriate to
other settings of the Faust legend, such as the play, Dr. Faustis, by
Christopher Marlow, emphasizing the atomic bomb would eschew Faust’s
relationship with Marguerite which is the focus of the opera. Ironically, this
production should be lauded for what it did not achieve. The atomic bomb was
present in frequent flashes of light as well as an image of a mushroom cloud
which began the Black Sabbath. But these instances were trivial, and the
mushroom cloud could have been easily construed as a puff of smoke billowing
out of a witch’s cauldron. Thankfully, for the sake of the opera, Marguerite
remained the focal point. If anything, due to the use of a curtain during
intermission which displayed changing images of Marguerite, her position in the
opera was intensified. Like other recent operas, such as Rossini’s
Armida, Faust contains a substantial amount of magic. Mr.
McAnuff can congratulate himself for keeping the mystery and the magic
alive.

Another significant innovation of this production was its portrayal of
Mephistopheles as an extension of Faust’s character. This harkens back to the
line in the original German play in which Faust in conversation with his
student, Wagner, refers to himself as having two personalities. He says “you
know one, may you never know the other”. Unfortunately, McAnuff’s decision
to portray the whole opera as Faust’s fantasy after he had poisoned himself
is problematic. To begin with, Faust is a two part drama. Although the second
part is never alluded to within the course of Gounod’s opera, based on the
inherent villainy of Kaufman’s, I would be willing to bet that if given the
opportunity to live, to experience more debauchery, he would easily avoid
dying. Secondly, the fact that the action of the opera was portrayed as
Faust’s fantasy as conjured up by Mephistopheles created incongruences in the
stage action. True, everything in this opera is an extension of Faust’s
fantasy as made possible by Mephistopheles, but Faust has to be able to
participate in that fantasy. At times he was not able to. Also, the action of
the opera took place within Faust’s laboratory. While colorful, dreamlike
scenery was introduced after the first act, until the end of the fairgrounds
scene, the set was sparse and monochromatic. Lastly, the unidimensional nature
of the rather bare set did not help the singers to project to the back of the
theater. This was at times evident in Kaufman’s performance.

This production by McAnuff showed every aspect Faust from the music
to the story in its best light. Despite occasional blemishes, the opera which
opened the Met in 1893 has a made a triumphant return.