Verdi writes gloriously for Violetta, so it’s a star vehicle for any soprano. But Violetta doesn’t exist in isolation. Although the many great singers who have created the part ensure that Violetta is central to the opera, she doesn’t exist in isolation. The drama revolves around the changing relationships between Violetta, Alfredo and Germont. This current production is important because Piotr Beczala’s Alfredo, brings out the complexity in Alfredo’s personality.This superb performance proves how important highly experienced, high quality casting can be. Beczala is passionate about historic tenor traditions, and this enthusiasm infuses his performance. Please read an interview with him here), La Traviata can be as much about Germont family values as it is about Violetta. 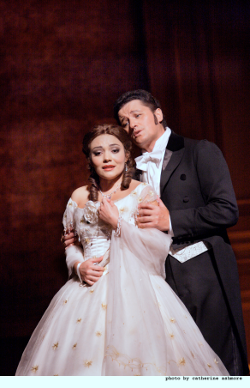 Ailyn PÈrez as Violetta and Piotr Beczala as Alfredo

We can perhaps understand why Violetta is in her profession, but Alfredo poses more difficult questions. What kind of man gives up family and status for a demi-mondaine? It’s much more than youthful lust. Even Violetta doesn’t believe him at first, but she’s persuaded by his intensity. Verdi pointedly raises the emotional stakes with the rousing “Libiam ne’lieti calici”. It’s more than a drinking song, it’s a hymn to life.
Because Beczala takes his cue from the music, his Alfredo is infinitely more than a lightweight charmer. The energy in his singing suggests that Alfredo represents an affirmative life-force, in contrast to the shallowness of life on the party circuit. Verdi is making a strong moral statement. Beczala’s Alfredo expresses the strength in the character — firm phrasing, vibrant colour and absolute technical control. Beczala sings the high “Lavero!” at the end of the cabaletta so rings out with a confident flourish. Beczala’s lucid elegance shows that Alfredo’s emotional depth springs from strength of character. 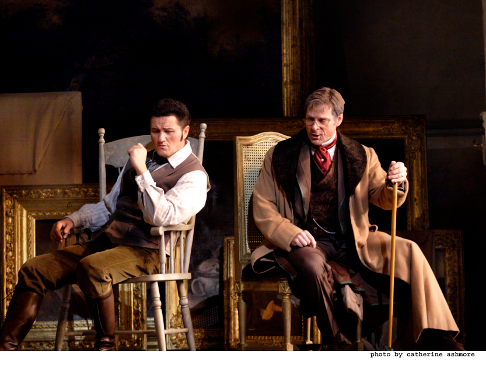 Simon Keenlyside as Giorgio Germont and Piotr Beczala as Alfredo

Beczala’s Alfredo also emphasizes the relation between father and son, a connection sometimes underestimated. Simon Keenlyside sings Giorgio Germont with gravitas. There’s real chemistry between Keenlyside and Beczala. Their dialogues bristle with the bitter energy of shifting father/son power struggle, but the richness of the singing suggests fundamental warmth. One senses that after Violetta is is gone, Alfredo and his father will have an ever stronger connection. Lovely “pura siccome un angelo”, so this family will thrive. Keenlyside’s acting was stiffer than his singing.. He used his stick, not with a swagger, but more as a crutch, as if he had a real life injury. Keenlyside is an athlete and has mishaps. Usually, he’s much more animated.
Expectations were high for Ailyn PerÈz after the publicity generated during the Royal Opera House’s Japan tour last year, where she stood in after both Angela Gheorghiu and Ermolena Jaho had to cancel at the last moment. Heroic circumstances. Last month, at the Placido Domingo Celebration, she sang a pleasant if unremarkable Gilda. Her Violetta was attractive enough allowing for uneven intonation and odd phrasing, which she might overcome with experience. One day perhaps she’ll be able to act with her voice, so her gestures come from within. The scene where Violetta squirms in horror as Alfredo enters the casino was unconvincing, though PerÈz warmed up, ironically, in the final act. Although Violetta’s music is so well written it cannot help but impress, the role is complex and by no means “pretty”. She’s much more than a projection of male fantasy. Violetta fascinates Alfredo because he can sense in her something others can’t, so whoever sings the part needs to suggest what that special quality might be. 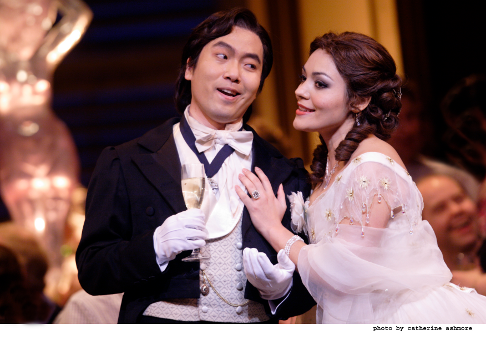 Ailyn PÈrez as Violetta and Ji Hyun Kim as Gastone

Rodula Gaitanou was until only last year a Jette Parker Young Artist. Her Haydn L’isola disabitata at the Linbury was very mature for someone so young (read about it here) so it’s good that she’s directing a high profile production like this. In a revival, the moves may be the same, but the way they’re done makes all the difference between dull repeat and fresh enthusiasm. Gaitanou’s clarity illuminates another sub-theme of this opera that’s often overlooked. The gambling table is a metaphor for fate. It’s mechanical, and in Eyre’s original concept, dominates the stage like a juggernaut. The gypsies dance in strict formation, though they sing of freedom. There’s something quite sinister about the bacchanale. So the crowd scenes are tightly executed to express this tension, while subsidiary roles like Flora (Hanna Hipp), Gastone (Jin Hyun Kim), D’Obigny (Daniel Grice), Douphol (Eddie Wade), Dr Grenvil (Christophoros Stamboglis) and Annina (Gaynor Keeble) stand out as individuals, doing justice to excellent singing. It’s a pity that the conducting (Patrick Lange) was erratic, especially since he comes with good credentials (Chief Conductor at the Komische Oper, Berlin).
There’s no such thing as a staging that lets a story tell itself. In a good production, clues are always present if you’re alert to them. Bob Crowley’s set may look “traditional” but it comments powerfully on the drama. In Act One, the diagonals in the set seem to be caving in on the stage, warning that something’s awry. At the centre of the famous country house scene is a doorway which opens onto a trompe-l’úil suggesting many distant doorways beyond. Everything is illusion, even the “books” on the shelves are painted, not real, Grand paintings are haphazardly strewn across the floor. In the final act, behind Violetta’s deathbed looms a giant picture frame covered in black, as portraits used to be covered when a person died. For a brief moment, Alfredo’s image is projected onto the cloth, but fades. Mirrors, dressmaking dummies, huge, overpowering shutters, all of which add to meaning. This is a beautiful production but it’s also intelligent. With casts like this, revivals are fully justified.
Anne Ozorio