Lyric Opera of
Chicago succeeds in meeting these challenges on both accounts in its recent
revival. The title role was sung by Amber Wagner, the Composer in the Prologue
by Alice Coote, Zerbinetta by Anna Christy, and the god Bacchus by Brandon
Jovanovich. Other roles showing strong performances include Eike Wilm Schulte
as the Music Master, Matthew Worth (debut) as Harlekin, and Nili Riemer
(debut), Jamie Barton, and Kiri Deonarine (debut) singing the three nymphs
Naiad, Dryad, and Echo respectively. Sir Andrew Davis conducted the Lyric Opera
Orchestra in a fluid and moving performance of Strauss’s score.

Alice Coote as the Composer

During the instrumental prelude to the first part the audience is presented
with preparations for a seventeenth-century production. Scaffolds, doorways to
dressing rooms, props and primitive dramatic machinery clutter the stage in
this self-reflective Prologue to the varieties of entertainment scheduled to
follow. The performers of the evening run about their tasks until the first
exchange of dialogue between the Music Master and the Major Domo of the palace.
Eike Wilm Schulte’s fluency and projection of both spoken and sung German are
exemplary as needed to steer a course of diplomacy between the Major Domo’s
demands and the sensitivity of his pupil, the Composer. Schulte’s
legato and attention to pitch in distended notes enhanced his
desperation in trying to fulfill multiple roles. In the speaking role of the
Major Domo David Holloway cut an appropriately pompous figure while relaying
his maser’s whims in a bureaucratic monotone. When the Composer, visible in
diligence at his desk from earlier in the Prologue, begins to react to news
from the Music Master, Alice Coote’s voice blooms with passion and devotion
to the musical art. Her wide range with a fluid transition from low to secure
top notes was used skillfully to convey the Composer’s consternation and
disbelief that his serious opera “Ariadne” was to be mixed with low comedy. 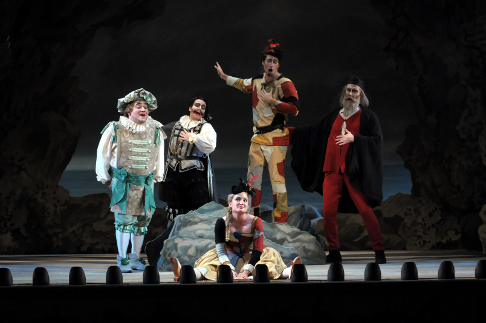 Phrases such as “Allm‰chtiger Gott” and “Nach meiner Oper ein lustiges
Nachspiel!” [“Almighty God” “A humorous interlude after my opera!”]
showed effective use of Coote’s dramatic sense of vocal transition. As the
Prima Donna and Tenor for the opera plead the importance of their own roles,
the Composer swirls in further controversy. Only after he learns that his opera
must be performed simultaneously with the commedia, Zerbinetta and
Her Four Lovers, does attention focus primarily on the personalities of
the Composer and Zerbinetta. Ms. Christy had portrayed a sprightly, playful
figure until this point. Her own transformation into a counterpoint for the
Composer is not only convincing dramatically, but it is also demonstrative of a
vocally altered character. The Composer, in turn, declares that he would prefer
to toss his precious score into the fire, detailed excitingly by Coote with
ascending pitches on “Lieber ins Feuer.” During the ensuing duet both
characters seem to lose their animosity, with the Composer’s interest clearly
in acceleration. Although he continues to take himself seriously, Zerbinetta
makes him see everything, as Coote declares urgently, “mit anderen Augen”
[“with different eyes”]. During their interchange Davis provided excellent
orchestral support with the woodwinds standing out especially in expressive
lines parallel to those for the voice. Coote’s final aria, “Musik ist eine
heilige Kunst,” [“music is a holy art”] was delivered as a heartfelt
soliloquy with effectively held notes emphasizing the Composer’s sincere
dedication to his art. When pulled out of this self-absorption by
Zerbinetta’s whistle and calls to prepare her troupe, Coote ended the
prologue with dramatic expressiveness on “frieren, verhungern, sterben”
[“to freeze, to starve, to die”] as reactions to this unexpected
forthcoming medley.

In the prelude to the opera proper Davis’s conducting brought out the
rich, orchestral colors with horns balancing off the nicely integrated string
playing. The three nymphs, who introduced the act with questions and
repartee on Ariadne’s emotional and physical state, sang distinctly
as a trio with vocal decorations blending fittingly. Ms. Wagner’s entrance
began with solidly produced low notes followed by equally impressive and
emotionally charged high pitches on “Mein Kopf ist leer” [“My mind is
empty”]. Wagner’s dramatic approach to “Dies muﬂ ich finden” [“I
must find this”] prepared Ariadne’s personality for the aria “Es gibt ein
Reich” [“There exists a kingdom”]. In this performance Ms. Wagner drew on
her preceding vocal characterization and added moments such as a deep emphasis
on “Totenreich” [“realm of death”] contrasting with an impressive high
pitch on “Hermes, stiller Gott.” When she described being alone, “ganz
allein,” with a touching piano, it further emphasized her brittle
emotional state, since this followed on her dramatic rubato at “von
meiner Hˆhle” [“from my cave”]. Her conclusion to the aria left an
impression of her character’s yearning and incompleteness. Immediately after
this piece Zerbinetta and her troupe dominate the stage but their attention is
now focused on sympathy with Ariadne’s plight. Matthew Worth displayed an
appropriate physicality as Harlekin while he sang an exquisite lyrical appeal
to the inattentive Ariadne. 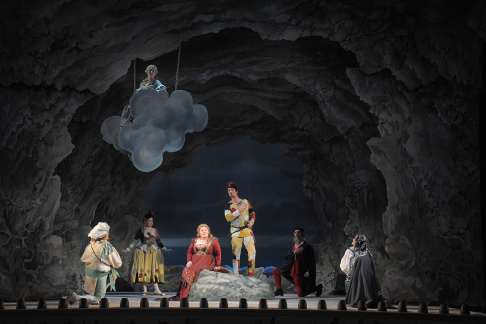 Of course one of the highlights of the operatic segment of Ariadne auf
Naxos is Zerbinetta’s aria “Groﬂm‰chtige Prinzessin,” in which the
innermost feelings of the commedia performer answer the question,
“Are we not both women?” Ms. Christy sang the challenging role with
alternating glee and wistfulness: her voice is a comfortable fit for the many
roulades and interpolated decorations. The effect taken on “treulos”
[“faithless”] and trills executed just before “Als ein Gott kam jeder
gegangen” [“Every man approached me like a god”] were a tasteful and
knowing cap on this splendid performance of the aria.

Once the nymphs announce the arrival of Bacchus [“Ein schˆnes Wunder
(“A beautiful miracle”)], his cries of “Circe” from the distance match
their excitement. From the start of his role Mr. Jovanovich was always on pitch
with notes produced forte when dramatically needed and piano
when expressing his appeals to Ariadne. His cries of “Circe” intensified
without a hint of strain just as he sang diminuendo on “Zauberin”
[“magical being”] when voicing his attraction. The final extended duet
celebrating the love between Ariadne and Bacchus as performed by Wagner and
Jovanovich was sufficiently moving to count as the “schˆnes Wunder” that
the nymphs had anticipated.

Photos by Dan Rest courtesy of Lyric Opera of Chicago