Thus, having kicked off in autumn with Puccini’s triptych, Il
Trittico, we now have a triple dose of Mozart-Da Ponte, beginning with
that delicious blend of the dissolute and the delectable, flavoured with a dash
of the supernatural that, mimicking its slippery ‘hero’ himself, so often
evades the directorial grasp: Don Giovanni.

Francesco Zambello’s staging, first seen in 2002 and revived several times
since, is certainly full of fire, nowhere more so than in the final scene when
flames literally threaten to lick the curtains and engulf the auditorium. But,
although the ‘dissolute one’ is ultimately punished, this opera is about
more than simply a ‘just’ meting out of hellfire and damnation; it is a
‘dramma giocoso’, and getting the right balance between menace and
mischief, between horror and humour, is a tricky task. 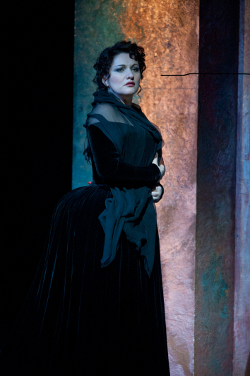 Maria Bj¯rnson’s sets certainly tend towards the dark and dispiriting: a
steely, curved wall suggests a suitably sepulchral edifice, festooned with
crucifixes. Aloft perches a brooding, kitsch Madonna; it glowers judgmentally
upon the degenerate goings-on, later prompting both a sacrilegious outburst
from the frustrated sinner and a sentimental serenade from Don Ottavio. The
ugly vertical construction revolves at the end of the first act to reveal a
painted perspective of a grand banqueting hall, effectively transposing us from
an abstract age scattered with assorted period allusions, to an unambiguous
eighteenth-century Spain. By the beginning of the second act, the wall has
crumbled into a pile of bricks and rubble.

This rather unappealing visual design is enlivened by the striking costumes
whose deep, rich hues evoke the intense, contrasting palette of Goya, and
integrate class signifiers and moral codes. The aristocrats sport royal blue
and noble purple, while the peasants are dressed in simple (‘pure’?) white
frocks; Don Giovanni is cloaked in crimson, as are his servants, excepting
Leporello whose shabby, grey attire reflects the seediness and squalor of his
existence.

Zambello’s ideas, though at times original and interesting, do not always
add up to a complete whole; but if the show ‘works’, it is largely due to
the musicality and muscularity of Gerald Finley as the eponymous philander, by
turns imperious and charming, threatening and mesmerising. He is self-knowing
but never self-pitying. Strikingly swathed in scarlet, from the first Finley is
ruthless and dangerous, recklessly slaying the Commendatore, and later
assailing Masetto with malice and spite. But, such viciousness is forgotten in
a flash, as his voice enchants and allures. It is obvious why Zerlina submits
so willingly, for ‘La ci darem’, like the subsequent Canzonetta, ‘Deh
vieni alla finestra’, is breathtakingly sweet. Although we can see that the
Don is oblivious to everything but his own satisfaction — sexual, gastronomic
and material — Finley’s audacity, self-belief and independent spirit thrill
us just as much as his vocal powers. 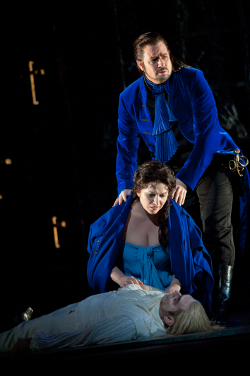 It is fitting that, following the ‘victors’ moralising fugato,
it is the scorching silhouette of the wrong-doing reprobate bearing aloft a
naked woman, anticipating continuing gratification, that is the image that
brings down the final curtain; for it is Finley who has monopolised our
attention and interest throughout. It is an image that neatly captures the
irony that Mozart and Da Ponte surely intended, and the ambivalence that the
score and libretto constantly declare.

Finley’s Leporello, Lorenzo Regazzo, could not match or, more
appropriately, complement and counterpoise, his master’s dramatic or musical
stature. In a disappointingly low-key performance, Regazzo’s fairly
insubstantial bass offered neither comic capers nor buffo vengeance.
There was much shoulder shrugging and miserable moping, but the catalogue aria
was disappointingly dull — even Elvira looked bored, as she drifted about,
disengaged and disinterested in the servant’s notebook flinging. However,
Regazzo did perk up for the mock seduction of Elvira, enjoying his
role-swapping adventures, his excited anticipation of the joys that his
master’s costume endow, quickly turning to disillusionment when he gained not
gratification but grief from the vengeful wronged. 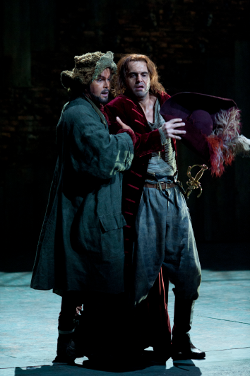 But, underpowered vocally and dramatically, Regazzo got ‘lost’ in the
chaos that concludes Don Giovanni’s party and in the final banquet scene, in
which Leporello’s heartlfelt terror should serve to emphasise his master’s
insouciant self-assurance, he went unnoticed.

The big surprise of the evening was Matthew Polenzani ’s Don Ottavio; this
effete aristo was a far cry from the ineffectual posturer and grumbler of far
too many productions. Indeed, Polenzani won the loudest applause of the night,
for his pianissimo da capo of ‘Dalla sua pace’ which was truly
refined.

There were strong performances too from Adam Plachetka (Masetto), a dark
voiced bass-baritone of stature, and Marco Spotti, who was a commanding
Commendatore.

The female leads were all making house or role debuts. Wearing a
Havisham-esque gown, Katarina KarnÈus was an overly melodramatic Elvira; with
little help from the director, her perfectly plausible anger lacked focus, and
often lapsed into deranged ranting and raving. Moreover, why is she borne in in
a sedan chair? She is surely savagely incensed, rather than self-composed and
sedate? Despite this, KarnÈus did convincingly convey Elvira’s unpredictable
mood swings: she has gloss and clarity at the top, but lacks weight and
richness in lower range. And she didn’t quite have sufficient stamina, tiring
in ‘Mi tradi’.

As Donna Anna, Hibla Gerzmava’s hard-edged tone was a good match for her
‘hard-to-get’ stance with Ottavio, but won her character little sympathy.
Irini Kyriakidou was a mature, knowing Zerlina but, while mostly secure, she
lacked variety of tone.

Zambello’s banquet scene is a mixture of the banal and the blood-curdling.
There is no statue — although, puzzlingly, the chorus stand stock-still, like
frozen figurines, when Don Giovanni invites his ghostly guest to dinner.
Instead of an imposing effigy we have an enormous swinging, pointing finger –
the hand of God, we suppose, or else that of the Commendatore himself, mocking
the beguiling invitation of the Don’s seductive serenade. 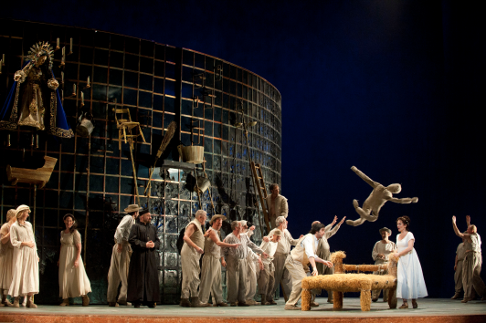 While there were dazzling pyrotechnics on stage, there was disappointingly
little fervour in the pit, despite the breakneck pace of the overture which
promised so much. Constantinos Carydis, conducting from memory, let the
momentum droop and drag, at times unsettling his soloists (even Finley, who
surprisingly anticipated the start of ‘La ci darem’) and wrong-footing his
chorus, who tripped and stumbled through the Act 1 finale. Carydis clearly
possesses a detailed knowledge of the score but there was simply not enough
attention to the overall ensemble, which was sacrificed for momentary nuances.
The recitatives were enlivened by some witty continuo playing from Mark
Packwood, and the ‘Girl-bands’ and other musicians at the Don’s wedding
feast — playing from memory — provided impressive entertainment.

Ultimately, whatever the flaws of conception, design and performance,
Finley’s masterful performance ensured a satisfying evening was had.

Photos by Mike Hoban courtesy of the Royal Opera House