Tamino and Pamina, the pair who must undergo separately tests of purification,
were sung by Charles Castronovo (debut) and Nicole Cabell. The Queen of the
Night, mother of Pamina, featured Audrey Luna (debut) and Evan Boyer assumed
the role of Sarastro, since G¸nter Groissbˆck was announced as indisposed for
the performance reviewed. StÈphane Degout (debut) and Jennifer Jakob were a
musical and dramatic delight as Papageno and Papagena. Sir Andrew Davis
conducted with attention to nuance while maintaining always a sense of the
whole. During the overture Davis encouraged a terse interplay among the strings
with a measured drive forward. Pauses were effective at transitional moments
just as shifting tempos were integrated to give significant shaping to the
overture.

The three ladies of the Queen of the Night acted and sang as a splendid
trio. Once Tamino’s calls for help prompt their arrival and slaughter of the
serpent pursuing him, the ladies moved in unison yet each doted individually
over the unconscious hero. Elisabeth Meister as the First Lady led the ensemble
with her focused soprano binding the vocal line as she encouraged a report to
the Queen of the Night. Cecelia Hall and Katherine Lerner were equally
entertaining in their attempts to remain vocally and physically in the presence
of Tamino. When the latter awakens, he is met of course by Papageno who accepts
credit for having delivered the hero from danger. In his introductory aria,
“Der Vogelf‰nger bin ich ja” [“I am indeed the birdcatcher”], and
ensuing dialogue StÈphane Degout combined a lyrical confidence with delightful
swagger in acknowledging the unfounded recognition. As his discussion with
Tamino is interrupted and punished, when the three ladies returned, Degout’s
Papageno displayed his protests with convincing pantomime. In control of the
stage once again, the three ladies present Tamino with a portrait of Pamina. In
reacting to the portrait Castronovo’s performance of “Dies Bildnis ist
bezaubernd schˆn” [“This portrait is magically beautiful”] displays
lyrical heft and beauty of tone while some of the louder pitches could be
rounded or softened to express the magical attraction. The entrance of the
Queen of the Night and her first bravura aria provided Ms. Luna with
opportunities to show her vocal facility [“O zittre nicht, mein lieber
Sohn” (“O do not tremble, my dear son!”)]. Luna’s dramatic high notes
on “Ach helft!” [“Oh help!”] were especially effective, these being
followed by practiced runs in the famous coloratura passages. After
Tamino and Papageno receive their magical instruments, flute and glockenspiel,
from the ladies, they are instructed to follow the lead of the three
Knaben [“youths”] to find the path to Pamina and rescue her from
the palace of Sarastro. 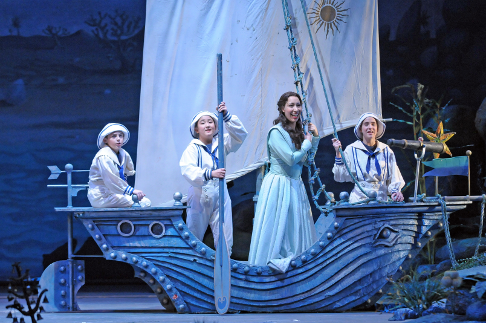 At the first appearance of Pamina under the guard of Monostratos, Nicole
Cabell projected a noble demeanor on lines such as “Der Tod macht mich nicht
beben” [“Death does not make me quake”]. In the ensuing duet with
Papageno, “Bei M‰nnern welche Liebe f¸hlen” [“For men who truly sense
love”], Ms. Cabell sang expressive, arching lines while Degout truly came
into his own with a superbly resonant tone and appropriate legato. In
the following scene Tamino searches for the entrance to Sarastro’s palace, in
order to confront the alleged captor, just as Papageno leads Pamina in search
of the flute’s response. Ms. Cabell’s encouragement to speak only the truth
(“die Wahrheit”) rang out in pure high tones in preparation for the
entrance of Sarastro. Mr. Boyer’s assumption of this role communicates the
requisite weight of authority, and his distinctive and well developed low
register contributes to a seamless vocal technique. His dramatic approach might
be enhanced at this point in the action in order to signal the gravity of the
forthcoming initiation.

Preparatory ceremony and eighteenth-century dress are emphasized in this
production at the start of Act Two as both Pamina and Tamino are given
instruction toward their trials of purification. Mr. Boyer’s Sarastro and the
chorus assumed here solemn tones in keeping with the following ritual scenes.
The interplay of power between the Queen and Sarastro focuses now on Pamina.
Ms. Luna projected accelerating coloratura intensity in her aria
“Der Hˆlle Rache” [“The wrath of Hell”] as she encouraged her daughter
to kill Sarastro. Mr. Boyer’s subsequent rendition of “In diesen heil’gen
Hallen” [“In these hallowed halls”] displayed excellent breath control
with rounded bass emphasis fully audible. The final two highlights of this act
belonged indeed to Ms. Cabell and Mr. Degout. Pamina’s “Ach, ich
f¸hl’s” [“O, I feel it”] in response to Tamino’s enforced silence
was performed with emotional commitment, skillful diminuendo, and further vocal
decorations emphasizing the heroine’s plight. In Papageno’s “Ein M‰dchen
oder Weibchen” [“A maiden or a wife”] Degout acted and sang with genuine
ardor, while he climbed onto the stage following his search through the aisles
of the audience. In this scene Degout captured the essence of both the
character and the music as he embellished his yearning lines with tasteful
appoggiatura. In keeping with this performance Papagena was a fitting
reward. 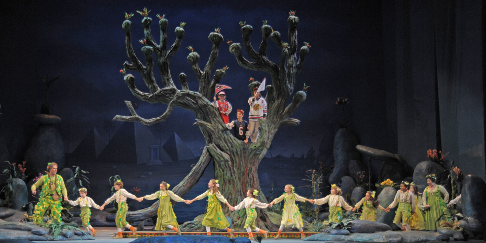 Scene from The Magic Flute