Possibly the finest opera of the 17th Century, and certainly one of the greatest operas ever written, it’s almost completely unknown to most people.

Why see it again, and why should you see it?

Forget what you think baroque opera is supposed to do. Instead of the alternation between recitatives and arias, singers showing off their skills with elaborate coloratura and high notes that stop the story in its tracks, Lully’s arioso writing keeps moving, often punctuated by dance, and avoiding the stasis one finds in an Italian baroque aria. 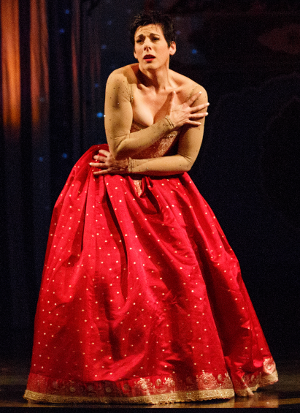 Armide is a story of love and duty. Set in the Crusades, Armide is an Islamic Princess, while Renaud, her chief antagonist — and eventually her lover — is a Christian Knight. The story elicits so many odd moments of personal conflict and ambivalence that when Jean-Luc Godard set passages from the opera in the film Aria, they illustrate a kind of misogynistic torment of women that seems to lead to madness. I don’t encourage you to see Godard’s film, at least until you’ve encountered the work as written.

Watching the opera tonight I thought of a film with a similar offbeat mythology, namely Mr & Mrs Smith, a story about a husband and wife who are hired killers. For awhile in the film they try to kill each other, not so very different from the antagonism one sometimes experiences in marriage, but taken to a comical extreme.

Or as Pat Benatar tried to tell us, “love is a battlefield”.

That metaphorical understanding of the opera’s epic battles — in other words, that Armide is less a matter of crusading and more a matter of loving — is the key to the new production. In OA’s previous take on Lully’s opera, at least in what Director Marshall Pynkoski spoke of in his notes– they seemed to focus mostly on the politics, so that it ended on an anti-climax, as Armide was abandoned by her lover Renaud. 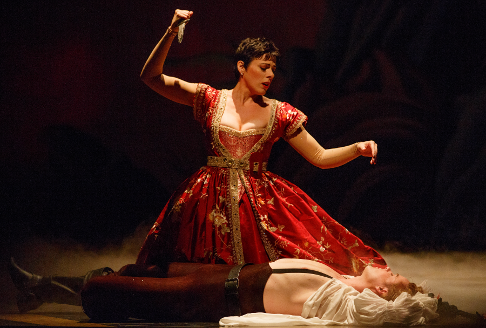 Peggy Kriha Dye as Armide and Colin Ainsworth as Renaud

This time Pynkoski paid less attention to matters of state and instead concentrated on matters of the heart. In Lully’s style of opera, dance is integral to the action, and so it’s no wonder that choreographer Jeannette Lajeunesse Zingg was involved more in Armide than perhaps any previous opera from OA.

Dancer Jack Rennie is the most memorable personage in the work (even without singing), playing the figure of Love. For awhile Armide seeks to escape from love, and enlists the aid of Hate, a demonic figure from Hell, to exorcise Love from inside her. The small part of Hate was memorably sung by Curtis Sullivan. Hate brings demons to torture Love, but in the end Armide chooses Love and rejects Hate (which makes him even angrier).

Both leads were outstanding. Colin Ainsworth as Renaud reprised the role he sang in the previous production, every note exactly on pitch. The voice is as gentle and sweet sounding as ever, but seems to have grown bigger. Peggy Kriha Dye as Armide has a far more difficult part to play. Where Renaud has to mostly look heroic and then fall in love, Armide is a far more ambivalent character of contradictory passions. The dramatic highlight of the evening was Dye’s scene when she comes upon the sleeping Renaud, intending to kill him.

This sequence — complete with daggers — might be why Jean-Luc Godard decided to show Armide as a window on the oppression of women, with his chief insight being that love makes women crazy. We saw Dye’s portrayal change from the confident attacker, seduced by Ainsworth’s vulnerable form, and tormented by indecision, finally incapable of striking. 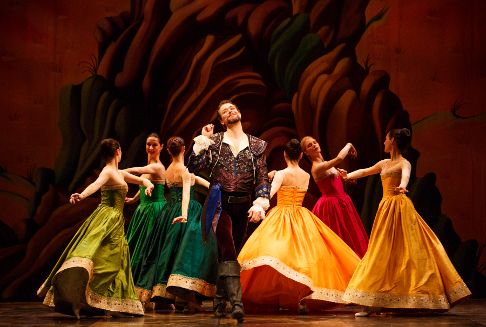 Olivier LaQuerre as Chevalier Ubalde and Artists of Atelier Ballet

The throbbing heart of the production is Tafelmusik Orchestra led by David Fallis. Singers were never covered, but always supported sensitively, even though the score is full of drumming and strong rhythms reminiscent of military music. The other highlight came unexpectedly from Tafelmusik Chamber Choir, in a sequence where we are being told about the delusory nature of reality. The music is a delightfully sensual lure, even as the text tells us otherwise.

Designer Gerard Gauci’s lovely sets are more elaborate than before, in anticipation of being toured first to Versailles Theatre, and then Glimmerglass for the summer.

But first they’ll finish out the week at the Elgin Theatre until Saturday April 21st.

This review is reprinted from Barcza Blog with permission of the author.