After the overture settled from a brassy start into familiar melodic lines,
DeMain highlighted rhythmic shifts to good effect. The “Cotton Blossom”
song, named for the riverboat with its staged entertainment, was performed with
choral energy yet individual phrases could profit from greater emphasis on
diction. The argument between the engineer Pete and the actor Steve, which
motivates so much of the subsequent conflict, is convincingly staged. Others
members of the ship’s community react immediately to Steve’s dismissal and
to the isolation of his wife Julie LaVerne. In the role of the undertalented
Ellie May, Ms. Mac sings intentionally off-key and overcompensates charmingly
in her attempts to portray an ambitious yet ill-trained replacement for Julie
in the ship’s roster of actors.

The arrival of Gaylord Ravenal introduces the second dramatic and emotional
twist that will have an effect on the remainder of the piece. It is a role that
suits Mr. Gunn’s voice and dramatic talents well. In his first song, “Who
cares if my Boat Goes Upstream?” Gunn’s sense of line adds to the carefree
swagger of Ravenal’s personality. Here and elsewhere the orchestra could
serve the soloist better if taken less forte in its enthusiastic accompaniment.
The pivotal duet with Magnolia, “Make Believe,” was performed touchingly by
Ms. Brown and Mr. Gunn, as the impression of a naÔve yet convincing affection
was kindled. When left to consider her thoughts, Magnolia asks Joe the husband
of Queenie whether this attraction could be a signal of love. As sung by Mr.
Robinson, the response of Joe, “Ol’ Man River,” is one of the highlights
of the production. Robinson portrays Joe with dramatic physicality and with
fully assured vocal technique. His sonorous bass is rich and full in even the
lowest pitches, and his legato matches the rolling pull of the river. When
Robinson repeats the song subsequently with male chorus, the effect is equally
striking. Magnolia’s second confidante Julie hears next of the budding
romance. After the trusting exchange with Magnolia, Ms. Cambridge sang the
well-known comment on love, “Can’t Help Lovin’ Dat Man.” Cambridge
showed here a firm sense of musical line as it supported the text yet the
enunciation of lyrics was overly careful. After Ravenal’s gambling song,
performed with spirited determination by Gunn, the remainder of Act I
alternates between staffing the showboat’s entertainment and the developing
romance of the protagonists. 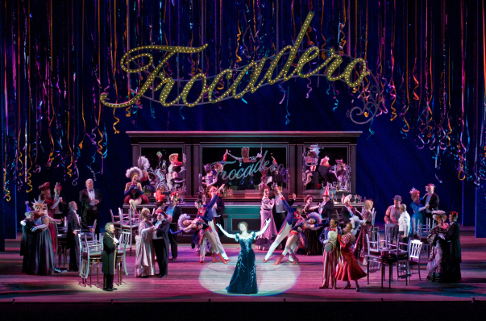 Because of Mississippi racial laws the marriage of Julie and Pete is
questioned, a complication leading to her dismissal as lead in the musical
show. Captain Hawks decides that his daughter Magnolia will substitute since
she is familiar with the numbers from having attended rehearsals. Almost
simultaneously Ellie May performs with female chorus the comment, “Life on
the Wicked Stage.” Ms. Mac assured that the number was an exhilarating
showstopper with all pitches at this point sung correctly. The love between
Magnolia and Ravenal blooms, just as they rehearse the fictional parts of
lovers on the stage. Brown and Gunn gave a convincing rendition of “You are
Love” as they make plans for their own wedding in keeping with the
stage-show’s narrative. As Act I ends, stories about Ravenal’s past do not
deter Captain Hawks from supporting the marriage yet his wife Parthy’s
reaction hints at domestic difficulties in Act II.

In the second act as arranged for this production the chronological sequence
unfolded smoothly. The individual scenes cover a span of several decades in the
domestic and emotional lives of Magnolia and Ravenal. Only the first scene
taking place at the 1893 Columbian Exposition in Chicago gave any indication of
the idyllic marriage promised by the lyrical exchange in the first act. The
birth of a daughter hardly deters Ravenal from his continued gambling. Indeed
one of the most emotionally moving scenes in Act II is Gunn’s departure from
his daughter staged in the convent school. The reprise of “Make Believe” in
this scene recalls earlier happiness and looks wistfully toward a future
reconciliation. For her part Ms. Brown’s portrayal of Magnolia as an
independent performer after having been left by Ravenal was achieved with both
vocal and dramatic skill. Her voice matured noticeably as she sang “After the
Ball,” and sheer confidence could only describe her solo appearance in a
Ziegfield show in New York. Since Queenie had attended these latter
performances, she repeats one of Nola’s popular numbers back on the show
boat. Ms. Simpson sings “Hey Feller!” with gusto and decided glee in her
committed enthusiasm. The final reunion of Magnolia, Ravenal, and their
daughter takes place, appropriately, where the romance began with the hope of a
transformed future. 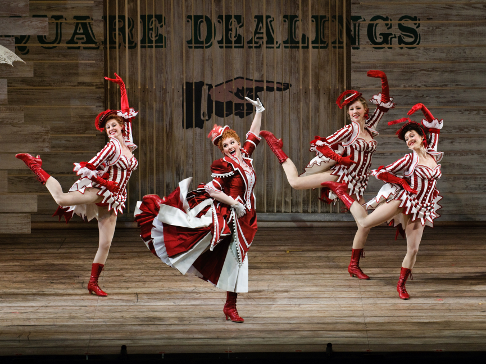 Photos by Robert Kusel courtesy of Lyric Opera of Chicago