FranÁois-AndrÈ Danican Philidor (1726-95) was a versatile chap: he is
probably best known today as a chess master with a sophisticated set of opening
moves to his name — the Philidor Defence. But, a member of a talented musical
family, he also found employment at the Royal Chapel at Versailles (where he
first made his mark by beating the older musicians at chess!) and was a leading
exponent of the evolving genre of opÈra comique. Indeed, his first
opera Blaise le savetier (The Cobbler’s Wife) might be judged to
have marked the launch of opÈra comique; moreover, both the operas in
the programme seem to have anticipated (and perhaps inspired?) Mozart.

Blaise le savetier commences ‡ la Figaro with a
‘domestic’. Young, handsome but penniless, Blaise and his vivacious wife
Blaisine must battle not only against poverty but also against the predatory
attentions of their rapacious landlords, Mr and Mrs Pinch. The latter are aptly
named, for they squeeze every last penny and attempt to coax sexual favours
from their young tenants.

Many of Philidor’s arias are quite short, interposed between the spoken
dialogue, but they establish character deftly and several make effective use of
the woodwind to add individuality. Martene Grimson (her real-life pregnancy
adding a wry frisson to the drama!) was superb as Blaisine: her principal aria
was tender and lyrical, and she acted convincingly and engagingly. As the
landlord’s grasping wife, Aoife O’Sullivan brought sparkle and energy to
the role. Robert Anthony Gardiner was a wily, relaxed Blaise, delivering the
text crisply, and projecting clearly and with pleasing tone. He made the most
of his virtuoso number, enjoying a duet with himself as he supplied his
wife’s responses in resplendent falsetto counterfeit.

Philidor’s expertise at chess earned him the moniker ‘le subtil’, and
dexterity, ingenuity and imagination are certainly all evident in the
composer’s resourceful shaping of the numerous ensembles and dramatic use of
harmony. The quintet was particularly zesty as the young couple presented a
united force in the face of their hysterical landlady’s outburst; here, as
throughout, Jeremy Gray’s direction was adroit, inventive but never fussy.

When AndrÈ Ernest Modeste GrÈtry (1741-1813) appeared in Paris in 1767 he
presented Philidor with a rival. (Apparently, Philidor took refuge in chess,
playing blindfolded and taken on several opponents simultaneously.)

The personnel of GrÈtry’s L’amant jaloux (The Jealous Lover)
are a familiar bunch, straight out of commedia dell’arte: an aging father,
his eligible daughter, her guileful maid and two penniless suitors. The
fast-paced and delightfully inconsequential plot embraces all the rudiments of
commedia — mistaken identities, nocturnal hide-and-seek, with a
mandolin serenade thrown in for good measure. 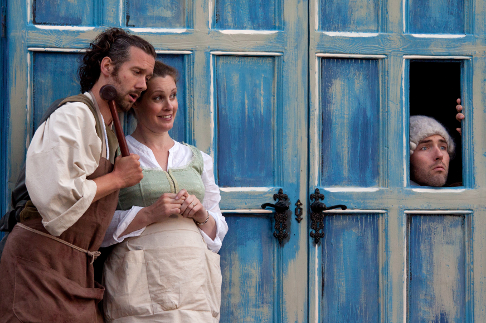 Don Lopez, a rich merchant of Cadiz, does not want his widowed daughter
LÈonore to re-marry, but she has other plans, being enamoured of the madly
jealous Don Alonze. Alonze’s sister and LÈonore’s friend, Isabelle, is
being pursued by her tutor who wants to marry her. Florival drives away the
tutor and Isabelle takes refuge with LÈonore, whereupon Alonze mistakes her
for a secret lover of LÈonore Meanwhile Florival has fallen in love with the
mysterious stranger he has rescued and arrives at the house; informed by the
housekeeper that it is owned by LÈonore, he assumes the latter must be the
object of his affection and serenades her. He is overheard by Alonze who, in a
furious rage, confronts Florival in the garden at night. Fortunately, they
realise they are not rivals before they do each other any damage. A
conveniently arriving inheritance allows Alonze to marry LÈonore and,
fulfilling the requirements the comic genre, Florival also marries Isabelle.

The soprano parts are technically demanding but all three singers coped
admirably with the challenges. As Isabelle, Grimson’s coloratura was accurate
and her intonation secure, while M·ire Flavin was excellent as the feisty
maid, Jacinthe. Tenor Oliver Mercer performed Florival’s serenade delicately
and touchingly, and Oliver Dunn was strong and confident as Don Lopez. The
translation by Gray and French is typically pithy, but at times some of the
cast seemed not entirely comfortable in the spoken passages.

Seated behind the performers, the musicians of Chroma performed with grace
and lightness, conductor Andrew Griffiths thoughtfully highlighting the musical
details in a manner which complemented the character and form of the vocal
lines. Griffiths clearly appreciates the composers’ melodic inventiveness and
the overall musico-dramatic structure of these works. The orchestral tone was
pleasing, the intonation excellent, and the ensemble between band and singers
consistent and secure.

Seeking out rarities and novelties has been a favourite, and greatly
rewarding, Bampton pursuit since the company’s creation nearly twenty years
ago. And, although dramatically rather slight, these two seldom performed
French opÈras-comiques of the eighteenth-century provided much
melodious charm and humorous drollery, proving once again that Bampton
Classical Opera can be relied upon to entertain with style and accomplishment:
a company truly serious about comedy.