The
topic of Nazi politics may be bone-chilling, but when written by survivors,
allows for some emotional distance and reflection. Meanwhile, history has
bequeathed us what may be considered a Holocaust opera in the true sense of the
word. The Staatsoper Berlin is currently performing Viktor Ullmann’s
Der Kaiser von Atlantis (The Emperor of Atlantis),which was penned at
the concentration camp Theresienstadt to a libretto by Peter Kien just before
the authors were transported to Auschwitz in 1944. The chamber opera premiered
in Amsterdam 31 years after their death.

Theresienstadt served as both a transit post and a kind of sham for the
extent of the SS forces’ brutality. Leo Baeck, Pavel Haas, and Gideon
Klein count among the conscripted intelligentsia at the ‘model
ghetto,’ where Ullmann was engaged as an official music critic. A
freelance musician schooled in Schˆnbergian composition, the Silesian native
found himself with more time to compose than ever before. His score creates a
dizzying, but organic blend of serialist passages, sardonic cabaret, and
Mahleresque harmonies while subversively weaving in melodies such as ‘Ein
feste Burg ist unser Gott’ in the final chorus. It is an at once
harrowing and uplifting setting of Kien’s libretto, which provides a
vivid depiction of the inner turmoil but resignation a prisoner found in the
end of life as he knew it.

The story in some ways calls to Ligeti’s Le Grand Macabre in
its montage-like structure and ambiguous treatment of death. A Loudspeaker
announces in the prologue that the living can no longer laugh and the dying can
no longer lament. Harlekin, better known as Arlecchino, the commedia
dell’arte stock character, is so bored that he begs Death to his
duty. But Death has decided to condemn mortals to eternal life. Kaiser Overall,
whose resemblance to Hitler prevented further rehearsals of the opera in the
summer of 1944, is informed by telephone of a plague whereby none of his
soldiers can die. Only when the war is over does Death, “the
gardener…the final lullaby,” deliver the world from pestilence.
The story further includes a drummer, a soldier and a girl named Bubbikopf. 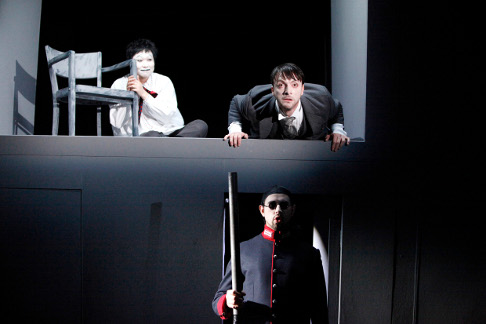 The Staatsoper staging by Mascha Pˆrzgen, seen January 29 at the
company’s Werkstatt, a small wing used for new music theater,
recreates the opera’s surreal qualities while maintaining a tasteful dose
of aesthetic restraint. The roles of Death and the Loudspeaker are cast with a
single bass-baritone (the tireless Alin Anca), who is wheeled in on a
motor-driven stool before revealing the garb of terrorist-like solider. His
exchanges with the sad clown-faced Harlekin are appropriately ambivalent, while
the Drummer assumes the presence of a caricature as she walks through the scene
beating wooden spoons mid-air. Kaiser Overall is a psychotic bureaucrat who
occupies the only hollow space in an all-white set (designs by Cordelia
Matthes). The proscenium moves in closer to the audience following
Harlekin’s eerie lullaby “Schlaf, Kindlein, schlaf.”

The cast, all members of the Staatsoper’s international opera studio,
gave a tight, convincing performance despite vocal unevenness. Anca carried the
show with theatrical verve and a booming bass that at times risked being too
loud for the space. As Harlekin and the soldier in the third scene, Kyungho Kim
did not rise to the same standards of sound quality and diction but was a
moving presence. The soprano Rowan Hellier gave a stand-out performance as the
Drummer, while Narine Yeghiyan, in the role of Bubbikopf, at times sounded
strained. Gyula Orendt gave an earnest performance as the Kaiser. Felix Krieger
led an elegant reading of the score with an ensemble of the Staatskapelle,
although the musicians’ position on a landing to the side of the stage
was not always ideal acoustically (drowning out Orendt in his final aria, the
very Mahlerian ‘Von allem, was geschieht’).The unearthly final
chorus could have been drawn out with more nostalgia, while the counterpoint of
a repeated, descending violin melody gave chills down the spine.