A mature Tatyana dashes about the stage desperately seeking a letter,
her grandiose white gown allowing glimpses of a simple scarlet under-dress: a
sartorial metaphor for the cold repression of Tatyana’s adulthood which
chills but can never entirely extinguish the passionate fire of her adolescent
self.

Later we learn that we have witnessed an imagined ‘in-between episode’,
interjected between the opera’s final two scenes. Onegin has re-encountered
Tatyana, now Princess Gremin, and is filled with remorse and regret for his
rejection of her love many years before. He has sent her a letter declaring his
devotion, and it is this avowal which Tatyana frantically seeks in the
pre-overture mime.

In these opening moments, we are introduced to Holten’s central conceit:
the simultaneity of past and present, which has the advantage of emphasising
that actions from the past can be lamented but never altered, and the
disadvantage that the tension and anticipation is lessened — for all is
known, and fulfilment and denial exists alongside yearning. When the music of
the overture begins, the fore-shadowing motifs of Tchaikovsky’s score are
oddly turned to reminiscence — for we have glimpsed the outcome. What should
be revealed by the musical journey through the score has already been visually
presented.

The elision of past and present is sustained throughout. The older Tatyana
and Onegin are partnered by dancer-doubles representing their younger selves
(Vigdis Hentze Olsen and Thom Rackett respectively). The action is therefore
experienced as flashback, viewed through the psyches of the protagonists who
are forced to witness and re-live their former torments. But, the young doubles
are not just visual externalisations of the characters’ inner selves: they
actually interact with their older counterparts. Sometimes this is a neat
device, actualising internal consciousness, but too often it is a
distraction.

In the letter scene, naturalistic acting from the real Tatyana is
accompanied by the exaggerated gestures of extreme emotional distress relayed
by the younger double who, following Onegin’s words of rejection, agitatedly
climbs one of the three fixed columns which dominate the stage, where she rests
aloft, hunched in a cupboard, throughout the ensuing party scene. Tatyana’s
confusion and subsequent devastation, depicted with such lyrical expression by
Tchaikovsky, are thus rendered blindingly obvious; but as her emotions are so
powerfully conveyed through score and voice, they need no such visual
articulation. Indeed, the latter detracts from the potential potency of the
vocal expression, which is a real shame as Krassimira Stoyanova is admirably
equipped to communicate Tatyana’s mental disarray. In the event, the young
woman’s anxiety is diluted — remembered and reflected on rather than
immediately felt — and distanced: for the silent mime places a barrier
between Tatyana and the audience to whom she unfolds her soul.

Moreover, Holten’s device often presents us with certainty and action when
the libretto and score intimate hope and nebulousness. Thus, Tatyana’s dreams
of an encounter with Onegin are visually realised when the young dancer wraps
herself around Onegin’s double, literalising a fantasy that should remain
merely imagined. In this way, there is often a disjuncture between the aural
and visual narratives; the music remains unresolved, the stage-scene provides
resolution. 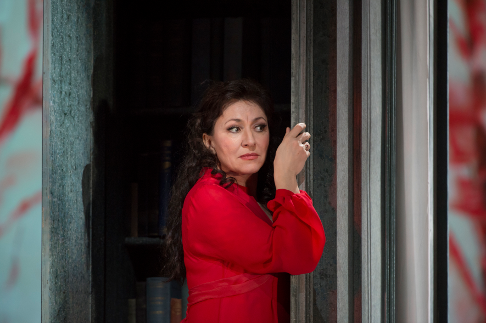 Similarly in the in duel scene, watched helplessly by the older Onegin who
paces broodily, it is the young double who commits the murderous act before
passing the gun to his older self — perhaps suggesting the continuity and
inescapability of guilt. In the silence at the end of the scene, in an overly
melodramatic gesture, Simon Keenlyside’s Onegin holds the pistol to his own
head before the festive fanfares of the ball interrupt and dispel his suicidal
intentions. Sometimes it feels as if there are too many layers: action,
reflection, immediacy, retrospection. During Lensky’s aria, sung with wistful
tenderness by Slovakian tenor Pavol Breslik, the older Onegin watches his
former friend’s anguish and reaches out to console him, inferring the
fundamental love that exists between the two men, but also implying
reconciliation when the painful reality is that there is none.

Finally, during the interlude before the final scene a dance of temptation
and denial reveals the passing of time, as Onegin is taunted by sylphs in grey
silk, who fly past like shadows, ever eluding his grasp. We are presumably
meant to apprehend that Onegin is the victim of his own sexual dalliances,
recognising too late his own superficiality and what he has lost. But, the
scene is crudely unsubtle and distracts from the tense anticipation which is
building in the orchestral fabric.

Frequently the characters, and audience, are endowed with too much
knowledge. During the party scene, twisting shadows on the backdrop reveal an
encounter between Olga and Onegin. From the first this Olga is depicted as
discontented and frustrated; Russian mezzo Elena Maximova produces some
unusually rich and powerful chest tones, but Olga’s commitment to Lensky
half-hearted in contrast with his earnest, simple devotion. Lensky is thus
rendered one-dimensional: his insecurities are shown to be founded in fact. He
is not insecure but betrayed; not a troubled, over-sensitive young man but a
deceived dupe. Holten has a surprise in store for us at the close too, when
Prince Gremlin — sung with striking poise and sincerity by Peter Rose —
arrives during the final meeting of Onegin and Tatyana to witness his wife’s
fraught denial of Onegin’s advances: it is therefore not clear what motivates
her refusal of his love — her own conscience or her husband’s authority.

My main objection, then, is that Holten intellectualises and externalises
something that is essentially emotional and instinctive. This may explain why
there seemed to be little passion or genuine human feeling, especially in the
opening scenes: the characters are remembering a drama rather than living it.
The retrospective gaze describes rather than enacts, and we experience the
drama at one remove, rather than sharing the lived emotions.

Holten presents us with a combination of realism and psycho-drama, and this
duality is reflected in Mia Stensgaard’s sets, the lighting design of
Wolfgang Gˆbbel and Katrina Lindsay’s costumes. The back- and fore-stage are
divided by three imposing columns which stride the stage; neatly folding doors
and drapes enclose and confine the characters, then open to reveal stunning
vistas of the Russian landscape. Leo Warner’s video designs project modernist
vistas behind the naturalistic nineteenth-century interiors. The hazy
Turner-esque reds and ochres of the Russian spring sharpen to piercing crimsons
in the duel scene: blood and passion are writ large, and contrast with the cold
blues of the fore-stage which intimate the emotional repression of the
protagonists.

Costumes similarly oppose vibrancy with monotony. There are simple splashes
of colour for the protagonists — glossy red, then white concealing the former
scarlet, for Tatyana; a shabby suit of cobalt blue for Eugene; pale peppermint
green for Olga; and steely dark grey for Lensky — which are sharply
juxtaposed with the distinctly characterless black of the peasant chorus.

I fear that by concentrating thus far on a single element of Holten’s
conception, I may have misrepresented my actual experience in the theatre; for,
although the dual time scheme dominates the production, it does not detract
from the beauty of the singing and the consistently high musical standards.

Bulgarian soprano Krassimira Stoyanova has the skill, artistry and warm
depths of tone to convince as Tatyana — even if she, like her Onegin, is
rather advanced of years for the role. She combines smooth lyricism and
technical assurance with dramatic vulnerability; but the visual shenanigans do
divert our attention from her vocal revelations, and her voice does not quite
have sufficient distinctiveness to overcome this.

Simon Keenlyside sings with a characteristically beautiful sense of phrasing
and form, but he is not a natural fit for the role of Onegin. This Onegin is
young and nonchalant rather than repressed and brooding; and Keenlyside’s
engagement with the emotional depths of the role is, surprisingly, at times
superficial.

Pavol Breslik is an accomplished and moving Lensky, in spite of Holten’s
diminishing of the role’s dramatic complexity and Breslik’s occasionally
understated projection. He deserved the warm applause he garnered on this
opening night; not least for his ability to lay still, without so much as a
twitch, for the last 40 minutes of the opera. Having (inexplicably) dragged a
spray of silvered brushwood behind him to the scene of his impending fatality,
Breslik subsequently finds himself strewn amid the detritus of the
protagonists’ emotional weakness and moral failings — the broken branches,
the tattered leaves from Tatyana’s torn book — Lensky’s bloodied corpse
underlining the tragic consequences of Onegin’s indifferent egoism.

In the minor roles, Kathleen Wilkinson and Jihoon Kim are competent as
Filipyevna and Zaretsky respectively, but rather unengaging dramatically. Diana
Montague (Madame Larina) and French tenor Christophe Mortagne (Monsieur
Triquet) make much of their character roles.

In the pit, the musical lines are refreshingly clear and lucid, as conductor
Robin Ticciati coaxes myriad woodwind colours and warm, if not heart-searing,
string sound from his players. There is some lovely horn playing in the letter
scene, singer and player finding both depth of feeling and a poignant
pianissimo, conveying Tatyana’s tragic mix of aching desire and fragile
vulnerability. But, Ticciati’s approach to the score feels too restrained and
refined: it is precise and elegant, but the music does not drive the drama
forward. One longs for a bit more sentimentality. The decision to divide the
performance into two parts, rather than the customary three acts, does not help
in this regard, for the delicate details which Ticciati reveals do not form the
sufficiently strong emotional arc which is needed to support the lengthy first
part which, at 100 minutes, feels an overly long haul.

The chorus are musically tidy but somewhat lacking in Russian bravura, their
movements restricted by the limited strip of fore-stage. In scene 2 the peasant
workers enter the house, stand stock still to sing their chorus and then leave,
the audience distracted in any case by the projection of Tatyana’s dream of
Lensky which is enacted above them. The polonaise is a limp, crowded affair as
Holten chooses to ignore the wonderful opportunity for a colourful set-piece
provided by this master of the ballet score.

Overall then this is an interesting, sometimes intriguing, production; there
is much superb singing, but the concept blunts the musical and dramatic
clarity, and dilutes the edge of the emotional impact.