Happily, the current season’s production at Lyric Opera of Chicago has been a delightful success, one performed with such dedication that the event may be called an exemplary Meistersinger. James Morris performs the character Hans Sachs, the N¸rnberg cobbler and master, a role for which the bass-baritone is particularly well known. The couple Walter von Stolzing and Eva Pogner is sung by Johan Botha and Amanda Majeski; the supporting couple David and Magdalene, significant in any production, is sung by David Portillo and Jamie Barton. Eva’s father Veit Pogner is performed with decided authority by the bass Dmitry Ivashchenko, and the role of the meddling Sixtus Beckmesser is taken by Bo Skovhus. The Lyric Opera Orchestra is conducted by Sir Andrew Davis in a new production shared with the Glyndebourne Festival Opera and the San Francisco Opera. The Lyric Opera Chorus is led by Guest Choral Master Ian Robertson.
From the lush romantic effect produced by the intersection of strings and brass to the penetrating discipline of the percussion the overture was played with reverence to the spirit of Wagner. Davis maintained an admirable sense of control in communicating the sense of a large ensemble with substrata of melodies throughout the overture and during the ensuing drama. Tempos were beautifully drawn out in this prelude as it culminated with descending strings in the midst of a prayer to Saint John the Baptist in the Katharinenkirche at N¸rnberg. Walther von Stolzing watches Eva Pogner from a distance, who in turn returns his glances as she is positioned in the church pew together with her companion Magdalene. As the service concludes, the women respond to Walter’s pleas for “Ein Wort! Ein einzig Wort!” [“Just a word! A single word!”]. Ms. Majeski’s Eva retains at this point an appropriately demure vocal impression, whereas the Magdalene of Jamie Barton instructs her own suitor David with urgent intonation: she suggests that he take up the cause of Walter and supervise the nobleman’s efforts at performance in the upcoming song-competition. Ms. Barton’s idiomatic phrasing was especially evident in the lines “Laﬂt David Euch lehren / die Freiung begehren. – Davidchen! Hˆr, mein lieber Gesell” [“Let David teach you / how to follow through with the courting. – My David, listen to me, my dear friend”]. In the following scene David indeed takes Walter into his charge. David learns with dismay that Walter is unfamiliar with the rules and expectations of formal singing as part of the masters’ tradition. As Sachs’s cobbler apprentice and pupil in song David has himself reached a level which he displays proudly. In response to Walter’s “Ratet mir gut!” [“Advise me properly!”], Mr. Portillo delivered David’s extended solo aria on the art of song with confident and accurate German declamation, exquisite ornamentation, and the physical involvement so typical of the character. Portillo’s sensitivity to David’s persona was one of the highlights of this performance with his enumeration of the masters’ intricate melodic designations — named for herbs, flowers, and birds — recited with seemingly breathless melismas. 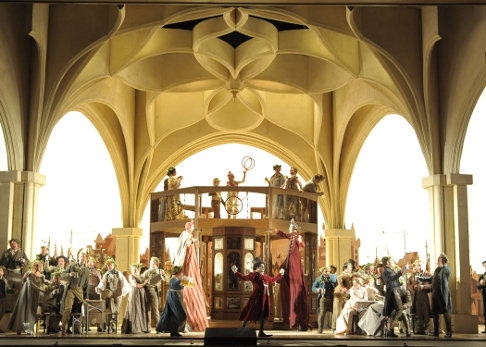 Act Three, Scene 1
Once the remaining apprentices were ushered into public with well-rehearsed choral involvement, the next scene was dominated by Veit Pogner, Sixtus Beckmesser, and the remaining Meister. After initial disagreements on protocol and the formal introduction of Walter von Stolzing, Pogner delivers his monologue on the significance of art in German lands as cultivated by the Meister [“Nun hˆrt, und versteht mich recht!” (“Now listen, and understand me well!”)]. Mr. Ivashchenko’s sonorous bass enveloped the deep vocal line with superb attention to diction; he delivered confident and expressive top notes on “Eva, mein einzig Kind, zur Eh” when designating “Eva, my only child, in marriage” as the prize to be granted to the victorious singer. The Beckmesser of Skovhus was appropriately oily, with a pedantic and simpering intonation, yet at times his vocal projection was somewhat too understated. Once Walter began his song, with Botha here giving the impression of being a tad too loud and a tad under pitch, Beckmesser as the Merker (“Marker”) continued to register faults, until Walter was discouraged from singing further. Mr. Morris’s Hans Sachs came now to the fore as he both disagreed with Beckmesser on motivation and reflected on Walter’s potential. The Act closed on a blackout with a hint of the confusion that would come to dominate in Act Two.
After the short orchestral prelude, played here with an ironically light touch, David speaks with the other apprentices about the expectations for Johannestag. Comedy and sincere emotion predominate in Act Two, as the characters interact in shifting constellations that emphasize both. Eva visits Sachs to argue a case for Walter’s opportunities. In this scene both Majeski and Morris sing warmly and convincingly of affection, suggesting at first their own relationship but ultimately communicating a lasting union between Eva and Walter. In the following scene Morris accompanies Beckmesser’s nocturnal serenade of Eva with expert timing as he comments and cobbles shoes with the blows and marks of a Merker. The brawl which ensues when David realizes that his Lene a sshe is disguised, and not Eva, is serenaded by Beckmesser, is staged so that seemingly everyone in the city participates in a physical and acrobatic tour de force. Only the calls of the Nightwatchman send the assembled crowds ascatter, so that Beckmesser is left alone in confusion as Andrea Silvestrelli’s rich, low pitches resound in the Watchman’s warnings.
The lengthy Act Three begins again with David, now in the workroom of his Master Sachs. It is of course in this Act that Sachs’s character shows its fullest development, just as Eva will experience a personal and vocal transformation. Both characters in this production were admirably portrayed. Morris lent a sense of confused pathos to “Wahn! Wahn! ?berall Wahn! [“Madness! Madness! Everywhere madness!”], which he channeled convincingly into the dictum that even noble causes acquire a touch of this Wahn. He performed a moving high pitch piano on “Johannestag” to underline the magic of the forthcoming midsummer events. Likewise Majeski’s Eva bloomed in this Act as she became assured of Sachs’s support of Walter. Her aria “Ein Kind ward hier geboren” [“A child was born here”] gave evidence of her assured lyric technique. Her excellent top notes on “Selig” and throughout the quintet concluded with a vibrant, shivering trill. The staging of the final scenes with the competition on the meadow was creative and exciting in keeping with the spirit of the festivity. The close of the production belonged appropriately to the efforts of Hans Sachs, as Morris here reminded the successful Walter “to honor for me their art” [“ehrt mir ihre Kunst”] in his resonant praise of the Master.
Salvatore Calomino
Click here for cast and production information.

Photos by Dan Rest courtesy of Lyric Opera of Chicago