This concert performance by the Chelsea Opera Group offered a rare
opportunity to judge the work, which was allegedly described by the composer in
later life as ‘ugly’, on its own merits.

Commissioned at the height of the frenetic activity which Verdi later termed
his ‘galley years’, the premiere of Alzira on 12 August 1845 at
the San Carlo Theatre, Naples, received a mixed reception. Verdi anxiously
anticipated a hostile press, but hoped for a favourable reaction from the
public: in the event, as Vincenzo Torelli reported at the time in the
Neapolitan newspaper Omnibus, exaggerated applause for the overture by
Verdi’s supporters goaded those less sympathetically inclined to an ever more
cool response. Torelli urged Verdi to consider whether he was writing too much,
too fast: “No human talent is capable of producing two or three grand operas
a year.” Indeed, overwork had precipitated a breakdown of health which
necessitated the postponement of the opening night; and, Verdi might have
feared the fates were against him when his preferred soprano, Erminia
Frezzolini, withdrew from the season to give birth.

If Verdi’s speed of composition was precipitously swift during these
years, so is the action of Alzira. Salvatore Cammarone’s libretto
attempts to whip Voltaire’s play, Alzire, ou les AmÈricains — a
largely philosophical dialogue — into an operatic love triangle, set in
16th-century Peru at the time of the Inca-Spanish conflict, complete
with the mandatory mixture of passion, sexual rivalry, vengeance and death.

Alvaro, the Peruvian governor, is on the point of death at the hands of
Otombo, when Zamoro — a Peruvian chieftain who had been believed dead —
returns and grants the release of Alvaro, before urging his tribe to set forth
for Lima to rescue his beloved Alzira, who, along with her father Ataliba, is
being held captive by Alvaro’s son, Gusmano. The latter, promoted now by his
father to the top job, falls for Alzira too; when Zamoro is seized in battle,
she succumbs to Gusmano’s marriage proposal in exchange for preserving her
true love’s life. Believe that she has betrayed him, a bitter Zamoro thunders
into the matrimonial ceremony and stabs Gusmano. With his dying words, the
young governor reveals his true nobility: explaining that Alzira acted to save
Zamoro’s life, with his final breath he blesses the couple. 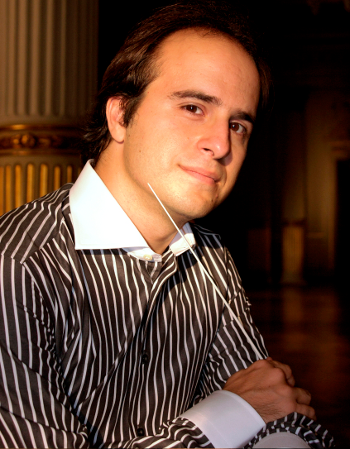 Unfortunately, the plot goes round in circles; the hero is captured and
condemned, then he is spared and freed, then seized once more, then released,
and so on. The ‘baddie’, Gusman, declares, ‘» destin ch’ei mora,/ nÈ
mai destin cangiÚ’ (He is designed to die, he cannot again escape death),
but by the end one is tempted to retort, ‘Oh yes he can!’. A similar lack
of genuine forward motion characterises the music too; there are no real
moments of dramatic revelation propelling the action forward, and thus the
scenas feel a little static and self-contained.

But, the score has a heart-on-sleeve approach to charting the emotional
waters. The overture sets the tone: frothy woodwind curlicues give way to
tempestuous tutti, serene strings are superseded by a romping
conclusion. It’s so Verdian it’s almost self-parody. But, it’s also
rather good. While there are none of the elaborate choruses, complex ensembles
and elaborate orchestration that mark Verdi’s finest works, there is much
melodic beauty, vibrancy and vigour.

Mario Sofroniou was an earnest Zamoro, producing afine display of
strong, muscular singing. If he could relax a bit more, he would achieve a
greater sense of openness and spontaneity, but he the shaped lines well —
particularly in his Act 2 aria, ‘Irne lungi ancor dovrei/ carco d’onta e
fuggitivo?’ (Must I drag out my days as a fugitive, bowed down with shame?).
He had the stamina for his extended scenas and was an appealing stage presence,
winning the affection of the audience.

As Zamoro’s rival in love and war, Mark Holland’s Gusmano began a little
cautiously but grew in confidence. Initially, his baritone, while attractive,
seemed quite small and somewhat tight, but in Act 2 he engaged more assuredly
with the drama, especially in his duet with Alzira. His final Act aria of
forgiveness was most touching, the tone soft but centred.

Irish soprano Majella Cullagh was magnificent in the title role. The
shimmering string tremolo which presages her first aria, ‘Da Gusman, su
fragil barca’, set a suitably expectant mood after the exclusively male
voices of the prelude and Act 1 opening (wrongly labelled in the programme,
Acts 1 and 2); and, from these first moments Cullagh spun a gorgeous bel canto
thread, gleaming and bright. Her cabaletta was nimble. Occasionally, in the
more delicate, sustained moments one could sense Cullagh working hard to
maintain secure intonation; but she demonstrated a sure sense of the overall
formal shape of the scenes, and clearly knows how to use dynamics to create
drama. Her Act 1 duet with Sofroniou was finely judged.

Both the female cast members outshone the men in one specific regard:
namely, they were less bound to their vocal scores: indeed, as Zuma,
Alzira’s maidservant, Lithuanian Liora Grodnikaite was alone among the cast
in having fully memorised her part. Consequently, she was able to concentrate
on developing character and situations, her creamy mezzo soprano both sensuous
and decorous.

Paolo Battaglia never wavered as a stentorian Alvaro, tempering his
authoritative stance only at the close in a moving display of grief upon his
son’s death. The declamatory pronouncements of Francisco Javier Borda’s
Ataliba were rather inflexible and monotonous of tone, but like all the cast,
the words were clearly audible. Tenors Jorge Navarro-Colorado (Otumbo, an
Indian warrior) and Paul Curievici (Ovando, a Spanish officer) made up the fine
cast.

The Chelsea Opera Group Chorus could not quite summon the force required to
project from the back of the hall over the instrumental forces massed before
them. The handmaidens’ chorus in Act 1 was pretty enough, and the soldiers’
chorus which opens Act 1 was, despite being rather stale and hackneyed stuff
— sung with energy and vigour. The orchestra was occasionally bombastic in
the big numbers, but elsewhere conductor Gianluca MarcianÚ graded the dynamics
sympathetically in the arias (aided by Verdi’s scoring). It took the strings
a little while to settle (the overture to Don Giovanni, a tribute to
the late Sir Colin Davis, which preceded Alzira was decidedly ragged in
ensemble and passagework) but once they found their feet they produced much
warmth and richness to complement some excellent woodwind playing. Without
undue haste, MarcianÚ kept things moving; he was a bundle of energy on the
podium whose enthusiasm coaxed evident commitment and enjoyment from his
players.

One of few Verdi operas where the lovers are both alive and together at the
close, this performance proceeded to its happy close and was greeted with much
appreciative applause. So, is this an opera deserving of the neglect it has
suffered? When, many years after the premiere, Countess Negroni reminded Verdi
of the work he reputedly replied: ‘That one is really hideous.’ Clearly
memories of the Neapolitans’ snub ran deep. Chelsea Opera Group made a
convincing case for an opera which is short, punchy and full of melodic charm.
Let’s hope someone ventures a fuller staging before too long.