Francesca Zambello’s courageous marketing decision to produce a
blockbuster Broadway musical each season is not without its challenges.†
Unlike opera, where audiences hope to be artistically engaged, Broadway
musicals draw crowds expecting to be entertained.† As such, the pressure is on
for the Glimmerglass Festival Artistic Director to provide musicals that keep
pace with — or exceed — the entertainment appeal of the Festival’s prior
efforts.††

Judged by the yardstick of its past successes, Glimmerglass’s latest
venture has come up short.† Its current production of Camelot, though
enjoyable, pales in comparison both to last season’s stunning production of
The Music Man and the prior year’s Annie Get Your Gun.
†

The finger pointing rightly begins with Alan Jay Lerner and Frederick Loewe
— whose 1960 collaboration can hardly be considered the pair’s best
effort.† Camelot lacks both the depth of story and the number of
memorable tunes of My Fair Lady, produced some four years earlier.†
Still, it was Glimmerglass’s new production, not the story and the music,
that ultimately underwhelmed those in the crowd who, like I, left the
theater unfulfilled. †

The story, adapted from T.H. White’s novel The Once and Future
King, centers on a medieval love triangle involving the enlightened King
Arthur, his handsome wife Guenevere and the love-smitten knight, Sir
Lancelot.† Themes of chivalry, romance, adultery, battle and ultimately
forgiveness run through the nearly three-hour show.† Baby boomers no doubt
will remember Camelot as all but having defined the Kennedy presidency.†
According to Jackie Kennedy, JFK’s favorite line came at the end: Don’t
let it be forgot/ That once there was a spot/ For one brief shining moment that
was known/ As Camelot.

The “one brief shining moment” in this production is David Pittsinger,
whose stunning singing and acting throughout the performance as King Arthur is
alone worth the price of admission.

Pittsinger, who from my seat in the theater looked curiously like political
humorist Bill Maher, sang beautifully and carried himself well onstage —
capturing the attention of the listener at all times.† His crisp speaking
voice spread his lines across the theater with ease and grace, while his clean
diction obviated the need for supertitles (which in this production accompanied
the singing but not the dialogue). †

Pittsinger’s full-strength bass-baritone and strong delivery, which at
times overshadowed the other singers, was apparent from his opening number,
I Wonder What the King is Doing Tonight, and his signature tune,
Camelot.† Even his whistling (during the charming duo with the Queen,
What Do the Simple Folk Do?) projected well.† The tender side of King
Arthur’s character came out, loud and clear, in Pittsinger’s earnest and
sensitive delivery of How to Handle a Woman, as the confused King
seeks guidance and wisdom in dealing with his beloved Guenevere.

As an actor, Pittsinger captured the essence of Arthur as a well-meaning
King seeking to make sense of the world and trying to do the right thing at any
cost — even if that means watching Guenevere slowly slip away into the arms
of Lancelot.† He forged a character whose ultimate decision to forgive the two
greatest loves in his life (Guenevere and Lancelot) we may respect or reject.†
Either way, Pittsinger’s Arthur is a flesh-and-blood character with whom we
can empathize.

As Guenevere, Canadian soprano Andriana Chuchman has the looks to sustain
the love triangle drama throughout the lengthy production, and her handsome
voice — while by no means large — made for a pleasant listening experience
during her principal numbers.†

Chuchman’s opening song, The Simple Joys of Maidenhood, set the
bar high for those that followed — culminating in what I thought her best
effort of the show: the sweetly expressive Before I Gaze at You Again
at the end of Act 1.† Unlike Pittsinger, however, Chuchman could never quite
abandon her trained operatic voice for something better suited to musical
theater.† And the mellowness of her speaking voice made me wish that
supertitles had been used for more than just the singing.

Next to Pittsinger, the most commanding performance of the evening came from
Jack Noseworthy — a first-rate actor whose suave and calculating presence as
Arthur’s nefarious illegitimate son, Mordred, was unforgettable. 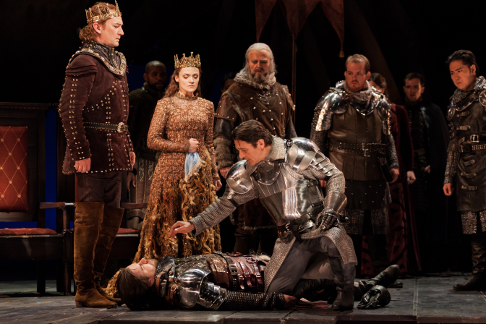 Noseworthy’s high-pitched tenor projected exceptionally well, and his
diction was beyond reproach.† (He sounded the most “British” of the
cast.)† Like Roddy McDowall in the original Broadway production, Noseworthy
spoke his melodic lines during The Seen Deadly Virtues, shifting to
pitches when singing along with the knights in Fie on Goodness.† But
whether singing or speaking, Noseworthy maintained an imposing presence
befitting his role as the show’s only true villain — staying in character
even as the audience began hissing him, if only affectionately, at the curtain
calls.

Nathan Gunn started off with a bang, using his handsome baritone to capture
the moment in his opening song, C’est Moi, where he defines his
character as the cocky, self-centered would-be knight to Arthur’s newly
created Round Table.† But Gunn never again sounded this good during the
remainder of the show, and his signature song, If Ever I Would Leave
You, sounded shaky and rushed, as well as lacking in any meaningful degree
of expression.

Glimmerglass Young Artists Clay Hilley (Sir Dinahan), Wayne Hu (Sir
Sagramore) and Noel Bouley (Sir Lionel) deported themselves well as the
triumvirate of knights and interacted playfully with Chuchman in Then You
May Take Me to the Fair.† I especially enjoyed the boys’ horsing around
with Mordred in the Act 2 Fie on Goodness — which I thought was
going to end as a Bud Light commercial. †

Wynn Harmon, in the non-singing dual roles as Arthur’s mentor, Merlyn, and
the eccentric old knight, Pellinore, projected his lines well but sounded
rather hoarse — making it difficult at times to hear his every word.† Young
Richard Pittsinger, the real-life son of David cast as the young and
impressionable Tom of Warwick, was a fitting choice to carry on the dream of
his hero King Arthur, as the latter heads to France to battle Lancelot’s
armies.

Director Richard Longbottom deserves praise for his charming staging of the
joyous Then You May Take Me to the Fair — a delightful number in
which Guenevere coyly coaxes the three knights to thrash newly arrived Lancelot
in the upcoming jousting match, promising whoever succeeds a good time in her
company at the Fair.† Longbottom nevertheless wasted several opportunities to
enhance the action of this mostly static production. †

The second-act dueling scene between the knights and Lancelot, performed in
slow motion, was utterly lacking in tension and anima.† The lightly
choreographed dance scenes by Alex Sanchez, while visually appealing, had none
of the pizzazz that ignited the stage in last season’s unforgettable
production of The Music Man.† Lancelot’s miraculous healing of the
fallen Lionel, which could have been milked for all it’s worth as a
dramatically vibrant moment, was reduced to a simple touch of the wounded
man’s chest — as if an abbreviated medieval version of CPR.†
Longbottom’s decision to begin Gunn’s delivery of If Ever I Would Leave
You from the very back of the stage was ill-advised, since the baritone
could barely be heard until making his way to the front.

Kevin Depinet’s abstract minimalist sets don’t do much to enhance the
drama, either.† An imposing structure in the shape of a right triangle anchors
the set, with a Disney-like mural of a seemingly far-off castle resting below
the top of the hypotenuse.† Standing at the base of the triangle is an oddity
sprouting what appears to be a stack of giant linguini.† When King Arthur is
seen hiding within the strands of linguini, we realize this is actually a
tree.† Cooked al dente.

Depinet is less abstract in his design of the King’s chambers.† A pair of
thrones sits on a lengthy tapestry, over which a large chandelier of candles,
suspended by chains, hangs overhead.† In the final scene this chandelier will
fall to the ground, if only slowly and deliberately, ostensibly to signal the
demise of Arthur’s vision of the perfect Camelot.† (I much prefer the scene
from Phantom of the Opera.)† Paul Tazewell’s colorful costumes,
while easy on the eyes, more closely resemble early Renaissance than the
story’s sixth-century medieval period dress.

The 42-piece orchestra, directed by James Lowe, had a rough time fighting
pitch problems during the instrumental ensemble sections.† There were also a
few sloppy ensemble moments during the transitions into new tempos during the
Overture and Entr’acte to Act 2, which I expect will disappear after another
performance or two.

Audience reaction at the curtain calls sounded genuinely excited,
particularly with respect to the three lead roles.† But it wasn’t until
Pittsinger (the elder) came onstage that the crowd took to its feet in tandem
— and justly so.† He was the knight in shining armor who almost
single-handedly brought this production out of, well, the Dark Ages.

This review first appeared at CNY
CafÈ Momus. It is reprinted with the permission of the
author.