While it may be true that in 2013 it is easier to
encounter a consistently well-sung, compellingly-acted performance of an opera
by H‰ndel than of any of Verdi’s mature masterpieces, many of the
performances that have emerged from dusty archives and personal collections
during the past few years have revealed that the ‘Golden Ages’ of previous
generations of Verdi singing show more tarnish than some listeners might care
to remember. When Verdi performances at the Metropolitan Opera during the past
few seasons have been only fitfully satisfying, these three releases in Sony
Classical’s series of Metropolitan Opera broadcasts—Un ballo in
maschera from 1955, Il Trovatore from 1961, and Don
Carlo from 1964—are welcome reminders of the standards to which
performances of Verdi’s most popular operas aspired during Sir Rudolf
Bing’s tenure as the Company’s General Manager. The choral singing and
orchestral playing are rarely of the quality that MET forces achieved either in
previous decades, when the influence of Gustav Mahler’s leadership was still
felt, or under the subsequent guidance of James Levine. These performances are
cut; viciously so in the case of Don Carlo. These performances do not
always find their ‘star’ singers at their considerable bests, but they are
representative of one of the world’s most important opera companies at a time
in its history when, on almost any night of the week, an operagoer could enjoy
an idiomatic, musically satisfying performance of a Verdi opera. None of these
performances is unknown to collectors, having circulated in ‘pirated’
editions of quality not markedly inferior to the sonics offered by Sony, but in
this year in which the music of Verdi is in the ears of most opera lovers it is
wonderful to renew acquaintances with these old friends.

History was made at the MET in January 1955, when legendary contralto Marian
Anderson made her dÈbut as Ulrica in the Herbert Graf production of Un
ballo in maschera. Prejudice and discrimination regrettably persist in the
world’s opera houses, but it is no hyperbole to state that Ms. Anderson
changed the musical world with her eight performances of Ulrica. By the time of
the broadcast released here by Sony, eleven months after her dÈbut, Ms.
Anderson’s nerves had settled. Many critics expressed regret that Ms.
Anderson’s dÈbut did not come earlier in her career, when the voice was
stronger and more pliable. She was nearing sixty at the time of the
Ballo broadcast, but her Ulrica is a compelling creation. The voice
remained on excellent form, the lower register appropriately earthy and the
upper register focused and impactful. Indeed, Ms. Anderson produces some
brilliant top notes in Ulrica’s brief appearance and injects a welcome sense
of occasion into the performance. Zinka Milanov first sang Amelia in
Ballo at the MET in December 1940, when the premiËre of the Graf
production opened the season. Her opening-night performance in 1940 did not
meet with critical approval, but in the intervening seasons she became a
favorite of New York audiences in the part. Ms. Milanov was a prime example of
a star soprano of the ‘old school’ in that vocal production took precedence
over dramatic verisimilitude. In this performance, however, she reminds the
listener that an exceptional voice can convey all of the emotions that are
expressed in the composer’s score via vocal means alone. In that regard, Ms.
Milanov is an uncommonly satisfying Amelia, the voice mostly steady and the
celebrated pianissimi deployed sparingly but to splendid effect. The
voice is slightly ungainly in the lower register, as it ever was, and there is
evidence of the scooping that increasingly affected Ms. Milanov’s singing as
the voice aged. Excursions above the staff are usually luminous, however, the
top C in ‘Ma dall’arido stelo divulsa’ rushed and slightly shrill but
dead on the pitch. There are fewer instances in this performance of the
singer’s much-cited habit of abandoning text in favor of unspecific vowel
sounds in moments of greatest stress, particularly in the upper register: her
diction is good in general despite some ferociously trilled r’s. Jan
Peerce’s tenor was a nasal instrument, which mitigated even his best efforts
at conveying Italianate ardor. Consonants are slightly swallowed in his method
of vocal production, but he, too, displays concerted efforts at producing good
diction. The voice is rock-solid throughout most of the compass, and Mr.
Peerce’s rhythmic precision is appreciable. He and Ms. Milanov work up a
froth of passion in their great duet in Act Two, ‘Non sai tu che se l’anima
mia,’ the soprano unleashing the full power of her spinto voice
unforgettably. Mr. Peerce comes to grief on top A, and Ms. Milanov avoids the
top C that ends the duet in the score. Vibrant in Act One, vital and touching
in his death scene in Act Three, and unimpeachably musical throughout the
performance, Mr. Peerce is a finer Riccardo than has been heard at the MET in a
number of years. Robert Merrill is a pillar of strength as Renato, his voice on
its finest mid-career form. He never overdoes the conviviality in early scenes,
but the breadth of his anger upon discovering Amelia’s seeming betrayal is
formidable. Mr. Merrill’s performance of Renato’s aria ‘Eri tu che
macchiavi quell’anima’ is for the ages, the line sustained effortlessly by
one of the great Verdi baritone voices of the 20th Century. Mr.
Merrill’s singing in the final scene should be played to young baritones with
Verdian pretensions as a masterclass in the art of Verdi ensemble singing.
Roberta Peters is a pert, perky Oscar, fluent of tone and text and confident in
her voicing of the high lines in ensembles. Her timbre and dramatic profile are
unapologetically feminine, but she sings delightfully. Samuel and Tom,
Verdi’s endearingly collegial conspirators, are excellently sung by Giorgio
Tozzi and Norman Scott. The presence of singers of the quality of James
McCracken, Calvin Marsh, and Charles Anthony in secondary rÙles reminds the
listener of one of the principal glories of the Bing Era at the MET, the
sustenance of a company of ‘house’ singers who were accomplished performers
in their own rights and could be called upon not only to take
comprimario parts but also to pinch hit in principal rÙles as
required. In 2013, one is unlikely to hear a Judge in a MET performance of
Un ballo in maschera who seems completely capable of getting through
the part, let alone one who, like James McCracken in this 1955 performance,
would within a decade sing Manrico and Otello. All three of these vintage
broadcasts benefit from the incredible depth of Bing’s roster. Ultimately not
a Ballo in maschera that forces other performances from the memory,
this recording preserves a typically heated performance led by Dimitri
Mitropoulos, of whose 208 appearances at the MET only eleven were at the helm
of Ballo in maschera. If the Athens-born conductor was sometimes
inclined to push the music rather hard, it was always in the interest of
dramatic effectiveness, and his pacing of this performance boils with passion
and unmistakable affection for the score. As the first MET broadcast to feature
an artist of color in a principal rÙle [Robert McFerrin made his dÈbut as
Amonasro in Aida three weeks after Ms. Anderson’s dÈbut, but
Aida was not broadcast in the 1954 – 55 season], this performance is
of tremendous importance: as an idiomatic performance of Un ballo in
maschera that is representative of the MET on best mid-Century form, it is
thoroughly enjoyable. 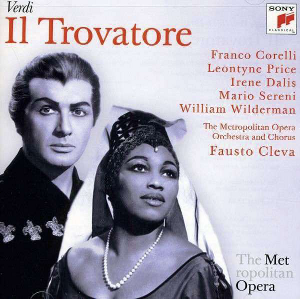 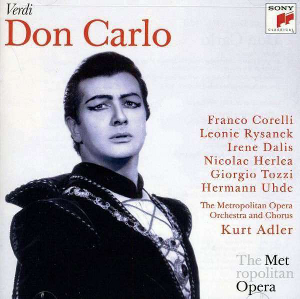 Before the dissolution of the MET’s system of having French, German, and
Italian ‘wings’ staffed by singers and conductors whose artistries were
built upon the foundations of those nationalistic traditions, New York was a
bastion of effective, idiomatic performances of Verdi’s operas. Perhaps the
sheer size of the new opera house at Lincoln Center has contributed to the
decline of performance standards in Verdi’s music in recent seasons. It
cannot be denied that a voice like Leontyne Price’s is of the quality that
emerges, at best, once in a generation. It cannot be said that the voices heard
on these three vintage MET broadcasts are irreplaceable, but it would be
difficult to argue that a Milanov, a Merrill, a Price, an Herlea, or a Corelli
has been heard at the MET in the past thirty years, especially in Verdi
repertory. In the context of preserving the work of these important singers in
assignments typical of their MET careers, these Sony recordings are valuable
documents that appeal not only to the nostalgia of those who heard the
broadcasts live over the airwaves but also to those who are curious about how
Verdi’s operas sound when sung by singers who know more about these scores
than what they were told in conservatory lecture halls.