Of the fourteen works that librettist William Schwenk Gilbert (1836-1911) and composer Arthur Sullivan (1842-1900) wrote together, H.M.S. Pinafore is one of the most popular. Its premiere took place on May 25, 1878, at the Opera Comique in Paris before a receptive audience. Although a summer heat wave dampened ticket sales, by September the show was playing to full houses. That same year the first unauthorized version of Gilbert and Sullivan’s Pinafore premiered in the United States and “Pinafore-Mania” began to sweep the nation. Dolls and other items based on its characters flew off store shelves while media of the time referred to lines from the show.

Approximately one hundred fifty unauthorized productions of Pinafore could be seen in the United States in 1878 and 1879, and not one of their producers paid a cent to the work’s creators. That is why the librettist and the composer boarded a steamship for New York hoping to set matters straight. When they arrived on November 6, 1879, a reporter from the New York Herald interviewed them, and one hundred and thirty-four years later, that interview is online here.

For many years afterwards Gilbert and Sullivan sued various entities in the U.S. in an attempt to establish control over their work and claim the royalties due them. They never succeeded. Pinafore opened in New York at the Fifth Avenue Theater on December 1, 1879. Unfortunately, the authorized version of the show only ran one month because most New Yorkers had already seen local productions. 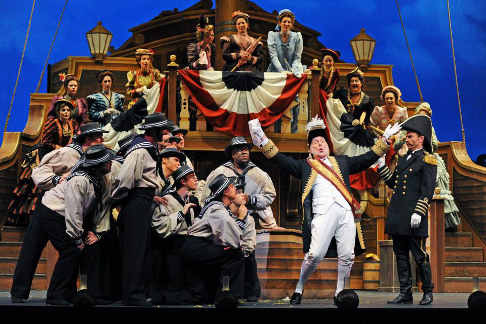 On October 11, Arizona Opera open its 2013-1014 season in Phoenix with Tara Faircloth’s production of Gilbert and Sullivan’s Pinafore. As the main feature of his scenic design, Douglas Provost used a set from Tri Cities Opera of Binghamton, NY, which had various levels and compartments that allowed room for the performance of all the shenanigans a comic opera could call for. Colorful, detailed costumes from AT Jones and Sons of Baltimore set the time firmly in the latter half of the nineteenth century. The ladies wore intricate bustles, the sailors sported natty looking uniforms, and the ship’s officers were decked out with tons of gold braid. Director Tara Faircloth devised various types of comic antics for the cast but they never interfered with the singing. Every cast member had good timing and the highest ranks took the steepest pratfalls. There were titles for the sung numbers, but some of the spoken dialogue was rather fast and a bit hard to catch.

As Ralph Rackstraw, David Portillo moved well and his crËme caramel lyric tenor voice rang out with passion for Josephine, his true love. Sara Gartland looked enchanting as Josephine and sang with an expanse of surging sound. Her voice was not as sweet as Portillo’s but their tones blended when they sang together. The star of the show was the agile Robert Orth as Sir Joseph Porter, the First Lord of the Admiralty, whom Josephine’s father wanted her to marry. A fine operatic baritone, Orth’s patter was machine gun fast, crisp, and completely understandable.

Mezzo-soprano Susan Nicely created a fascinating character as the lady whom Sir Joseph describes as “plump and pleasing Little Buttercup”. An excellent comedienne with an hourglass figure, she sang her part with an English contralto sound. Baritone Curt Olds has a long history of appearances in musical comedy which he put to good use in Pinafore. As the Captain, he officiated over hi-jinks galore.