The sumptuous splendour of Michael Levine’s opulent sets and Han Feng’s
eye-catching costumes is an optical feast, and the tableaux and choreographed
sequences, particularly those which open and close the opera, retain their
gasp-rendering thrill. The japonaiserie is meticulous and
authentically minimalist: low wooden dwellings, rooms like paper boxes, sliding
doors and walls silently gliding into infinite formations, tea trays laid
decorously on tatami mats. The kaleidoscopic array of geishas’ gowns and
ceremonial headgear, set against the deep carmine of the rising sun or the
emerald glow of green moonlight, is stunning.

Yet, so much of the design seems to me convey an idealised, Orientalist
perspective, casting a Western eye on Japanese culture, underpinned by a score
which is innately Eurocentric. Like Pinkerton, we are tourists in a foreign
land, and perhaps guilty of indulging in what Edward Said described as a
‘Western style for dominating, restructuring and having authority over the
orient’. 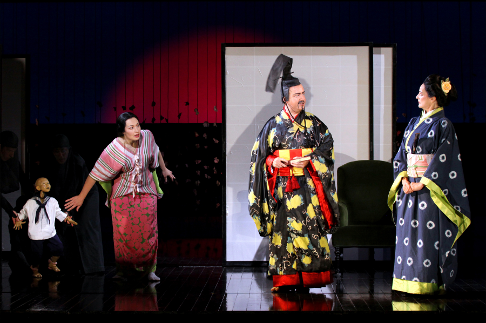 The stunning skills of the puppeteers of Blind Summit astonish us
with their eye-deceiving dexterity and the scenes which Minghella crafts have
an undeniable visual exquisiteness; but, such pictures are essentially static,
hypnotising the onlooker and drawing attention away from the emotional drama
which unfolds through the music. For example, at the end of Act 1 the long duet
of Butterfly, fearful of love’s fragility, and Pinkerton, unthinkingly
indifferent to her terrors, touches us with less immediacy than does the
sculptured landscape of disorientating paper moons and pendant floral fronds
— trails of starry necklaces against the night sky. It is as if the flimsy
tale of a love disregarded and betrayed cannot bear the ‘weight’ of the
artistic realisation of the director’s lavish visual imagination.

It is, in fact, Peter Mumford’s marvellous lighting design which so
magnificently generates the production’s shimmering exoticism, injecting
drama into the pictorial vistas. Mumford crafts a constantly shifting world,
one of appearances rather than materiality: wondrous, yet elusively
insubstantial. He fashions a maze of interwoven reflections which extend
upwards to the night sky and slithers downwards along Levine’s glimmering
sloping stage. Despite the production’s Eurocentrism, the shifting images and
shadows which Mumford sets in motion suggest a more authentic East, as they
flicker and flutter across the mirror surfaces, as elusive and ambiguous as
Butterfly’s own identity. In a land where power is in the hands of men, and
women are valued only as the transient objects of male passion, the mirroring
echoes both evoke a dreaming air, and also suggest Butterfly’s own search for
the identity imposed upon her by, and reflected in, the eyes of others — that
is, as she endeavours to become the object of Pinkerton’s fantasy. 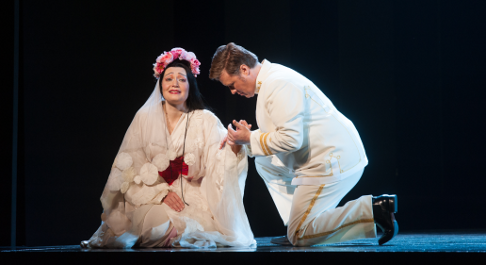 Thus, Butterfly is herself a ‘puppet’ — as the blood-red kimono sashes
with which the dancers encircle her immobile form confirm. But, Mumford’s
lighting can hint emotional depths; in the aforementioned duet, for example, as
the petals flicker fleetingly, they recall the hannabi displays so
familiar of Japanese summer nights — their flowery fire is often multiplied
by the dark waters above which they explode — and perhaps suggest the flame
of passionate devotion which blazes in Butterfly’s heart.

Ironically it is the passive, self-abnegating Madame Butterfly, sung with
seductive ease by Russian-American soprano Dina Kuznetsova, who in this
production proves the strongest character; for while Japanese women are
traditionally required to be compliant and submissive, it is Dina Kuznetsova
and Pamela Helen Stephen, as her maid Suzuki, who vocally dominate the
proceedings. Making her ENO debut, Kuznetsova used her warm, full voice to
convey Butterfly’s tender devotion and constancy. Although perhaps somewhat
mature for the role, she convinced and moved hearts: her soprano is ripe with
Romantic lyricism, and full of dusky hues, but as she shows in the second Act,
she can also spin a gorgeous pianissimo. Most impressively, she
communicated every word of the text; for once the surtitles were largely
redundant.

Kuznetsova’s haunting performance, and excellent diction, was matched by
Pamela Helen Stephen’s characterful Suzuki; she had enormous stage presence,
and in Act 3’s ‘Gi‡ il sole!’ the range and impact of the emotions
conveyed was striking, from sorrowful resignation to helpless dismay.

Sadly, as Pinkerton Timothy Richards was less engaging. Also making his
house debut, Richards sang sturdily but with little vocal diversity or musical
characterisation. He displayed an unfortunate tendency to ‘shout’ at
emotional highpoints, in order to be heard about the full orchestral surges.
George von Bergen was a bumbling American Consul Sharpless, but dramatically
and vocally he also seemed rather adrift; his voice was sufficiently resonant
but at times lacked focus. And, the diction of both male leads was poor. 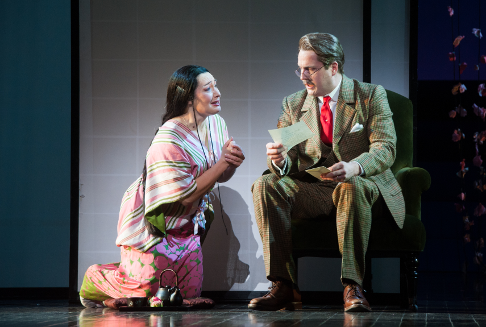 There were solid performances from Alun Rhys-Jenkins (Goro) and Alexander
Robin Baker (Prince Yamadori); and Mark Richardson was fittingly imperious and
formidable as Butterfly’s uncle, The Bonze, with a ferocious bite to his
bark. Catherine Young made a strong impression as Kate Pinkerton.

Butterfly’s child is a bunraku-inspired, sailor-suited
puppet-child; but while we marvel at the deftness of the black-costumed
manipulators who imbue the marionette with uncanny veracity, the singularity of
this lone puppet results in a distancing of our affections. The alien child
seems strangely material and unyielding, at odds with the evanescence of the
rest of the production.

There was another ENO debut in the orchestra pit, with conductor Gianluca
Marciano taking the helm; the ENO orchestra gave a reliable performance but one
which did not altogether capture the emotional heaves and peaks of the score.

In the final reckoning, Minghella’s visual alchemy casts its spell but it
is Kuznetsova who makes the magic work. In Act 3, the lyrical force of her
melodic utterances conquers the marvellous but, at times, diverting imagery;
and, seduced, discarded and forgotten, her unwavering resolution makes up for
the absence of consistently powerful dynamics between the other characters.
Kuznetsova convinces us that, despite her assertion that she is now American,
Butterfly — in re-enacting her father’s ritual suicide — is killed by the
compelling, ineffaceable social mores of her own culture.