Hurrah for the Royal Opera’s latest and most innovative Baroque
production. Inside this gorgeous gem of a theatre, the Shakespeare’s
Globe’s new indoor space known as the Sam Wanamaker Playhouse, Kasper Holten
and his team have created a mini masterpiece of baroque performance with
Cavalli’s L’Ormindo.

Aided and abetted by a superb team of young singers and Christian Curnyn’s
top-of-the range period musicians Holten has given us — some might say at
last — hope for the future. Now Londoners have a truly special place within
which to enjoy baroque opera and period theatre which does not intimidate with
either size or brutal modern architecture. Seating just 340, and open since the
beginning of the year, the Playhouse, snuggled alongside its famous larger
sister the Globe, has been described as “an archetype, rather than a replica,
of a specific Jacobean indoor theatre”. Inside, lit only with beeswax
candles, the audience is immediately immersed in the drama seated as many are
within yards of the performers, others just a little higher in the galleries
surrounding the proscenium-less stage. With Cavalli’s little known
L’Ormindo (last seen in London in 1967) which opened on Friday night
to a packed house, the Playhouse has announced its arrival on the baroque opera
scene with a flourish of shameless extravagance, saucy wit and sublime
musicianship. 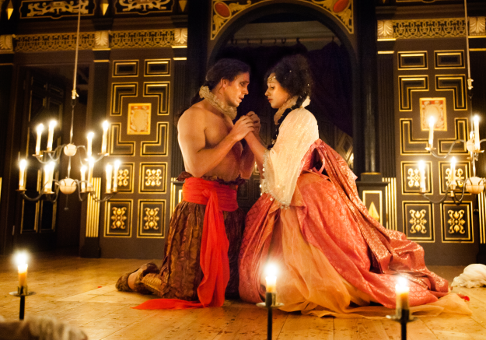 Cavalli’s work may be little known today — his La Calisto being
perhaps most frequently performed — but this near-contemporary of Monteverdi
was highly successful in his day and a master of his craft. He had to be: no
composer working for either aristocratic patron or the new breed of fickle
theatre owner at that time could get away with second best. From palace drawing
room to the streets inside weeks was not uncommon. His work may have gone out
of fashion for a few hundred years but perhaps its felicitous mix of eroticism,
money, fame and fortune now rings a topical bell? With L’Ormindo we
have the usual baroque pot of swirling royal love affairs, spurned fiancÈes,
cross-dressed nurses, bawdy comedy, magical allegorical figures, and
lower-class confidants who use the audience as sounding boards for their
musings on the baser problems of life and love. What we also got however was
real international-standard production values: fabulous costumes by Anja Vang
Kragh (whose Dior/McCartney pedigree is easy to appreciate), a raft of some of
the best young singers available today, clever stage direction which used the
unique size and shape of the space to best advantage, a marvellously witty
English translation by Christopher Cowell and an 8 piece band of seasoned
period performance experts (the continuo group, led by Curnyn, of harpsichord,
baroque harp and theorbo deserve special mention). 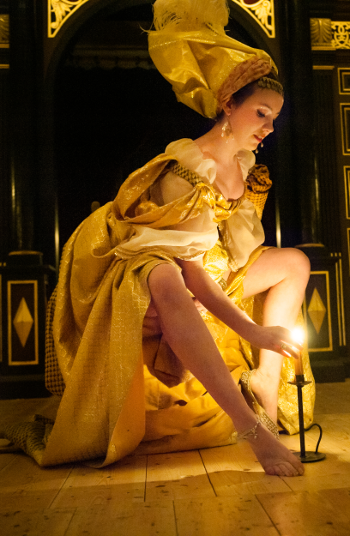 The nine singers, some taking two roles, were without exception terrific.
Rehearsals must have been sufficient as they moved gracefully and expertly
around the ever-present hazard of the real candle flames at both head and foot
height (this writer not being alone in holding their breath from time to time
as huge dresses, swirling capes and feathers came within millimetres of
conflagration). But it was the excellence and intelligence of their singing and
acting which supported the whole edifice around them; seldom does one get the
chance to enjoy an opera where one can honestly say there was no weak link.
Each deserves detailed praise and description, but suffice to say that if
forced to choose just two, the names of Sam Boden (high tenor) as Ormindo, and
Rachel Kelly (mezzo soprano) as Mirinda might just be them. Boden displayed a
beautiful limpid tone and line totally in keeping with his character and Kelly
a warm yet lively mezzo with which she also managed crisp diction — an
important facet of performance in English with no surtitles. Of the smaller
roles, mention must be made of James Laing (countertenor) as the page
Nerillus/Cupid for both his elegant even tone and apparent insouciance as he
hung suspended in pink and gold tutu from the flies. Such gentle guying of
baroque opera’s traditions was part of the humour inherent in this
production.

It seems that Kasper Holten in his relatively new position of Director of
Opera at Covent Garden has at last turned the tide and found imaginative ways
to support the continued flourishing of “old” opera. By working with
innovative partners such as the Globe and Curnyn’s Early Opera group, he has
done what many before him failed to do: spark new life into old magic. Long may
we enjoy the fruits of his labours.