Too bad it has often handicapped the team with a Konzept of the version set in a Sweden that seems to indulge Gustavo as an immature Boy-King. The production begins with a staged prelude in which a dapper-suited, white cardboard-crowned Gustavo enters in front of a black show curtain playing with a red yoyo (no fooling) as he regards a huge hanging image of a skull outfitted in an oversized Elizabethan neck ruff and a rudimentary gold paper-cut out crown that suggests Bart Simpsons haircut.
Said yoyo makes a re-appearance any number of times during the evening, last and certainly least when he holds it in his hand, extended to heaven as he dies. His play-acting during the love duet, his relishing getting up as a randy sailor, his romping with Oscar, all suggested a bratty, spoiled Kim Jong-un but with better hair. No attempt seemed made to hide that Oscar was not a male, and in fact the character seemed to revel in acting all girly.
Doey L¸thi’s costumes at times were a grab bag of early-mid 20th Century creations and there were many things to admire in her design. In addition to the men’s well-fitted, muted suits, Ms. L¸thi allowed a flight of fancy by getting up the guys in playful sailor outfits for the end of the first scene, featuring knee pants, striped tops, and white sailor hats. The ladies in scene two were in colorful print, simple day dresses with Ulrica also sporting a cleaning lady’s work smock. (Good God, a prescient Putzfrau!) 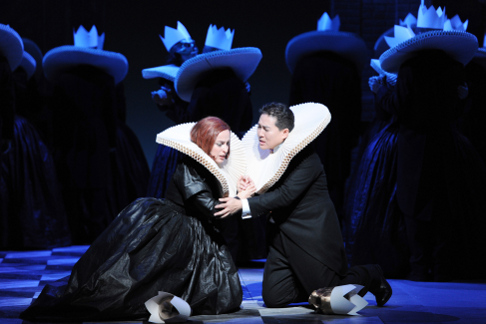 Barbara Dobrzanska as Amelia and Andrea Shin as Gustav III of Sweden with chorus
I also liked having the conspirators (and male chorus) in the gallows scene decked out in black suits with bowlers and umbrellas looking like surreal Magritte figures in search of a green apple. But then there was an odd, shiny, bright red half-glove that the men wore on the right hand that communicated. . .what? Blood on their hands? A riff on Wacko-Jacko? Who can say? For the titular ball, the all-black look seemed to revert more to Elizabethan time with a contemporary twist, especially for the women who were in shiny, voluminous ball gowns, with silver half masks, pointy white construction paper crowns (again), and oversized white neck ruffs (see “hanging skull,” above).
The imposing set design (Friedrich Eggert) was quite pleasing and often provided an effective psychological environment for the enfolding drama. The basic setting is a ball room, the stage right half all ornate gray marble with moldings and decoration, the stage left side rust colored, bare brick, not unlike the unfinished great rooms of Schloss Herrencheimsee. (This unadorned half is revealed by Oscar and Gustavo during the first extended duet, as they pull down a muslin drape that had been covering it.) A massive banquet table is placed center stage, upon which Oscar and Gustavo conduct no end of frolicsome prancing and dancing.
As the conflicts between characters become apparent, the floor (actually on a three foot platform), splits down the middle (table, too) and opens to a large inverted “V” of a playing space, floor-level center stage. Although there is a bit too much unnecessary “fine-tuning” and futzing with the exact size of this central opening, it does serve to provide a fine focal point for say, Ulrica and her crystal ball. The two levels also allowed for good variety of stage pictures.
Stefan Woinke did a commendable job with a lighting design that showed real imagination and insight. His area lighting established the right moods and kept soloists well illuminated. It was perhaps cheeky to have Oscar snap her fingers to command a spotlight for “his” first number but the moment (and effect) worked. A large circle of pale blue light on the center stage floor was well-used several times, not least of which was during the cat and mouse flirtation in the love duet, culminating in the couple meeting dead center in the light at the climax. I loved the atmosphere created when the ladies’ chorus brought cylindrical, blue tinted votive lights to the sÈance. And I loved even more when these were re-purposed by placing them around the set for the gallows scene, the spooky desolation suggested further by an overturned half of the banquet table. 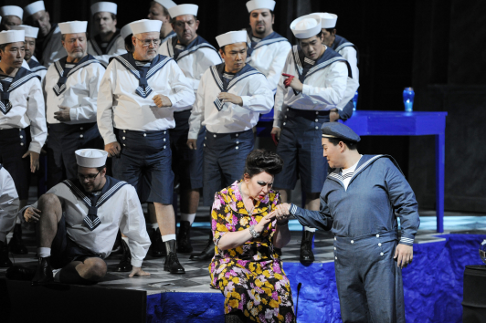 Ewa Wolak as Ulrica and Andrea Shin as Gustav III of Sweden with chorus
That half of the table flew to hang menacingly over the heads of Anckarstrˆm and Amelia in their big confrontation ‘at home’, the impact of which was marred by a fly man asleep at the rail. When the scene began the front drape went up, but the skull cutout remained and the surtitle screen flew in even lower than that, blocking the action until first the screen, and then the skull got properly readjusted.
Aron Stiehl’s stage direction ran the gamut from amazingly apt (that beautiful circling love duet), to pleasingly competent (arias all had a good theatrical arc), to “what-was-he-thinking?”
When the sailors broke into a dance at the end of Scene One, the effect was a Village People number as staged by St Vitus. Goofy met sloppy. Next scene, the women’s semaphoring hands worked pretty well in a revival meeting sort of way, until the King got the spirit and crossed the front of the stage like he was doing the back stroke and Moonwalk all at once. There were occasional odd uses of levels with principal singers making their way on the stage platform, only to have to jump down to floor level. The chorus boys make lots of distracting noise jumping to earth as Gustavo begins his last solo in Scene One.
Conversely, Mr. Stiehl’s final ball scene is a superb piece of stage craft with excellent movement of the assembled forces, clean choreography, and wonderful focusing of the action. The final duet between the lovers was a model of dramatic tension and the death scene was creditably positioned and lit. . .right up until that dang red yoyo came back.
As Gustavo, Andrea Shin displayed a warm, if not always ‘present’ tenor. Although no announcement was made, I wondered if he might not have been indisposed. There was a persistent light but noticeable gruffness in the passaggio, a subdued lower voice, now and then some ringing top notes, but others that were lightly covered in able to incorporate them into the line. And he tired as the evening went on. It is to Mr. Shin’s credit that he husbanded his resources and finessed his way through the final act, but at least on this occasion, the role did not seem to be an easy fit.
Seung-Gi Jung brought a big, forward-focused voice to Count Anckarstrˆm, but the tone could get unwieldy when he went to pulverize a note rather than just sing it securely. When he sang more introspectively, the cantilena was smooth and the voice vibrant. The handsome baritone has a fine sense of theatre, and his anguished utterance of » finita (Eri tu) was heart-wrenching. With so many assets at his command, I urge consideration that a more controlled approach might yield even more impressive results.
The two conspirators were solid and dramatically engaged. Yang Xu (Count Ribbing) showed real promise with his sizable, piercing bass, and as Count Horn, Luiz Molz made a fine contribution. In the small cameo of Cristiano, Andrew Finden took charge of the stage and made every phrase count, with his pleasing baritone and animated presence producing a solid impression.
Emily Hindrichs’ Oscar is as good as I have heard anywhere. Her flexible voice had thrust and clarity, and her vocalization and dramatic commitment were far and away more substantial than the often-encountered chirpy throw-away presentation. An impressive vocal accomplishment indeed. Ewa Wolak is a seasoned and assured singer who knows her voice well and knows her way around Ulrica’s every challenge. Ms. Wolak easily blends her awesome, potent chest register all the way up into a buzzy, searing top that raises gooseflesh as well as the roof. This was a top-drawer portrayal.
And then there is always the Divine Miss D: Barbara Dobrzanksa sings Amelia as well as anyone else on the world’s stages today. Anyone. Else. Her rich, rounded lower voice has just the power and mettle needed to pull off the tricky Ecco l’orrido campo. The upper middle blossoms as it ascends into as expansive a warm spinto as you are likely to encounter. In addition to effortless, thrilling high climaxes, she can scale back her voice to a thread for those melting outpourings of love and despair. The Publikum seems to know well Barbara’s worth, since she was roundly cheered at the call.
In the pit, conductor Johannes Willig had some initial control issues, and the first pages found the orchestra sounding thin and unidiomatic. The chorus also took some time to settle, the basses initially wanting to bound ahead of the beat. But by the end of the first scene, the reading had settled competently into place. Starting with Act Two the Maestro inspired a growing fire that took hold as his assembled forces began cutting loose with some passionate Verdian music making. For future shows, here’s hoping that the fierce commitment of the closing pages could be brought forward to the start.
James Sohre