La Fille has certainly been derided over the years for its vulgarity and
jingoistic tendencies. Yet dig a little deeper and you find that the canny
Donizetti was also in fact essaying a new direction away from the
all-conquering Italian opera of his time and, by a slick piece of “art
concealing (or revealing?) art”, he was on the way to creating a new style.
Indeed he had more than 20 years of compositional experience behind him by the
time Fille hit the stage in 1839/40, and he used all his considerable
wiles to achieve his aims. Perhaps Theophile Gautier best summed up this work
as “facile et spirituelle” — and certainly it seduces with its
infectiously gay (in the original sense),light, and bright music as much as it
explores the weightier themes of nationalism, feminism and the human response
to loss and war, despite skimming over them with a gossamer thread of catchy
tunes. So how to bring all this to a tiny space in the Wiltshire countryside? 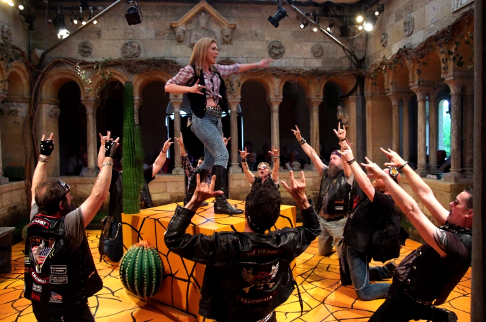 Director Jeff Clarke and his designers Nigel Howard & Graham Wynne and
conductor Toby Purser simply threw away the rule book for this English-language
version and solved the production “problems” with panache, wit, imagination
and, well, plenty of va-va-vroom. Literally almost, as the Regiment is
converted to a South Californian Hell’s Angels-type biker gang, all six of
them beautifully kitted out in full leathers, tattoos and bandanas riding some
interesting-looking “Darley Havisons”. They are “at war” with a rival
gang and so immediately we understand what Clarke is doing and are seduced into
this early 1960’s version of the Napoleonic wars. Marsha Berkenfield, social
climber in LA, her daintily-camp butler Mr.Hortensius, Sulpice is
“president” of the Regiment gang, Dulcie Crackenthorpe an appalling old
heiress, Tonio a Hispanic immigrant (serendipitously cast) and Marie as in the
original, an orphan “found” by the Regiment as a baby. True, there is the
odd surgical cut: no room, literally, for the opening scene with the
“Marquess” and Tyrolean peasants praying for deliverance en masse — but
apart from that Clarke has kept very close to the original opera. The libretto
however was definitely given a far freer rein by Clarke: plenty of choice biker
language, plenty of near-the-knuckle anti-Hispanic invective.

Any “Fille” anywhere has always been an opera which stands or falls by
the success of its Daughter of the Regiment; over the decades it has been
defined by many by the quality of the soprano singing the role of Marie —
from Jenny Lind, via the great Dame Joan Sutherland, and on to such modern day
successes as Natalie Dessay. So it was a delight and a relief to hear young
Australian-born soprano Suzanne Shakespeare take on the mantle with a fearless
display of sparkling coloratura, trills and even a few decorations of her own.
Her voice has both a warm middle and a shining top: E flats popped with aplomb,
yet with “Il faut partir…” her goodbye to the gang in Act One,
she found a touching pathos, ably drawn. A bravura performance from start to
finish — a young star on the high road for sure. So then, of course, there is
the “will he, won’t he” aspect of Tonio’s (in)famous “Mes
amis….”. If young Spanish tenor Jesus Alvarez was nervous, it didn’t
show. We might have been nervous for him for in that intimate space and
orchestration for just eleven instruments, but yes he delivered all nine of
those high Cs with conviction and bang in tune. 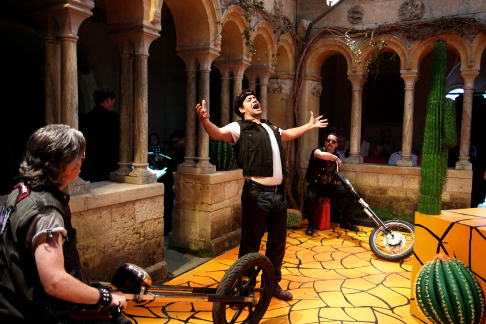 However, no matter how thrilling the young leads were, or how convincing
their acting, here at Iford it was the role of Sulpice, sung by the excellent
Adrian Clarke which held the whole show together. Totally in the part from
start to finish, beautifully observed, expressively sung, what a tour de force
he gave us. Almost as impressive was Katharine Taylor Jones’ Marsha
Berkenfield, a statuesque figure wearing the vintage dresses with assurance and
poise, her warm mezzo voice supple through the range. A comically-awful Dulcie
Crakenthopre was played in drag by one of the bikers, Philip Cox who obviously
had a lot of fun mixing his roles. James Harrison’s mincing butler was the
right side of caricature and kept the laughs coming. A word must be said here
for the biker gang: sung by Cox, Richard Belshaw, Graham Stone, Martin George,
Angus McAllister and Richard Woodall, this was no ordinary “chorus” job.
With only six voices to fill out Donizetti’s wonderful music each was a true
soloist, each a significant actor. The same must be said of the 11 players of
that music: from opening solo trumpet to resounding final chords, nowhere to
hide and nowhere needed.

The production team kept it simple but effective with the cloister converted
to a tract of dry desert and cacti. The Music Lesson was ingeniously staged
with an electronic keyboard masquerading as a grand piano, in turn doing duty
as a dance-stage. Clever, witty, and it worked. Which, really, sums up this
mini-triumph of the imagination. A must-see if you can.