On September 13, Los Angeles Opera opened its 2014-2015 season with a revival of Marta Domingo’s updated, Art Deco staging of Giuseppe Verdi’s La traviata. It starred Nino Machaidze as Violetta, Arturo Ch·con-Cruz as Alfredo, and Pl·cido Domingo as Giorgio Germont. The conductor was Music Director James Conlon. During the overture a gentleman offered to accompany a rather reluctant lady standing under a streetlight. Then the curtain rose on Violetta’s opulent home. The contrast was enormous.
Machaidze looked gorgeous in her white 1920s “flapper” gown. Both she and tenor Ch·con-Cruz started off slowly, but they came into top form in the Garden Scene of Act II. By that time they had relaxed and their voices blossomed. His “Deh miei bollenti spiriti” was smoothly spun out and he sang the cabaletta as if even its highest notes were easy for him. As the elder Germont, Domingo was stern with Violetta at first but showed his character’s softer side in a quiet moment. We missed his sun-drenched high notes, but he made a fine dramatic impression as a baritone.
Act III is the focal scene of this production and it was interesting to see the LA Opera Chorus dancing choreographer Kitty McNamee’s version of a Charleston to Verdi’s opening measures. Soloist Louis A. Williams, Jr. danced with spectacular height and spot-on landings. Here Machaidze, the “Twenties Violetta,” was in her element singing with silvered sounds, occasionally allied with the lustrous mezzo tones of Peabody Southwell, the Flora. As the enraged Alfredo, Ch·con-Cruz showed his ire, but when castigated by his father, he collapsed into a heap on the floor. He and Domingo gave a fascinating portrayal of the relationship of a father to a grown son who still needs parental approval, whether he wants to admit it or not. 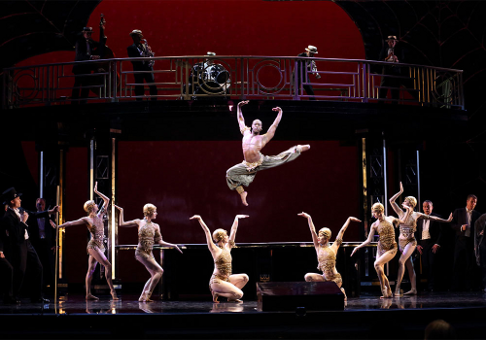 Louis A. Williams, Jr. (dancer)
Machaidze was at her best in the final scene. Her reading of the letter and rendition of “Addio del passato” was heart wrenching. The audience felt the full meaning of her words, “Ë tardi” (it’s late). The letter came much too late for the fragile courtesan. When Alfredo finally comes to Violetta, she has only one moment of pure joy before lapsing into unconsciousness.
Vanessa Becerra, who sings a leading role on the recording of Daniel Crozier’s new opera, With Blood, With Ink was the caring attendant. Bass Solomon Howard, who will make his Metropolitan Opera debut as the King in Aida later this season, was an impressive Dr. Grenvil.
Music Director James Conlon conducted with great regard for the needs of the singers. Ch·con-Cruz’s voice is not very large but it has a sweet, lyrical tone. Conlon made sure that the orchestra never covered his sound. The work of the Los Angeles Opera music director is one of the best reasons for attending the company’s performances. He makes each production of a popular opera say something new, no matter how many times it has been played.
After this evening’s performance, the opera presented Los Angeles County Supervisor Zev Yaroslavsky with an award for his service to the company. Since he had conducted the National Anthem, there were numerous jokes about his conducting ability, but he had earned the award by helping the opera get much needed funding from the city, which it has since paid back.
Maria Nockin